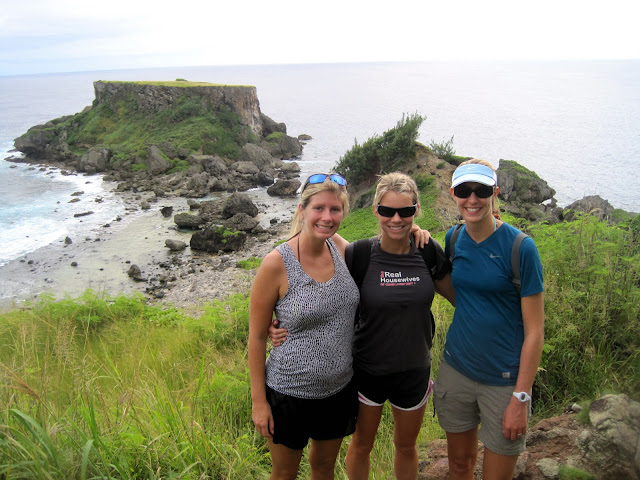 After a memorable day of diving, we were thrilled to have a great offer from our guide Harry to take us hiking to Forbidden Island. I'd learned from my research that this was one of the signature hikes on Saipan but a difficult trail to find and complete without the expertise of a repeat hiker. We were grateful Harry offered to take us, so we got up first thing Wednesday morning (or, uh, 9:30a), and headed out. We didn't know at that point there was more in store for us on that hike than we were expecting. 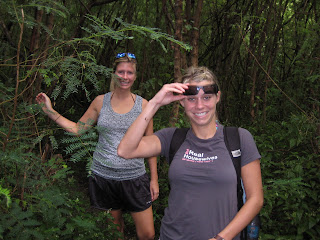 The hike starts out with a relatively gradual slope down through the jungle. The trail was pretty slick... I ate it and scraped up my forearms in the mud on the first 10th of a mile. This is becoming somewhat of a recurring pattern on hikes out here and my backside and palms are paying for it! Everyone was having a great time and we were taking plenty of pictures, especially once the hike opened up out of the jungle to a gorgeous view of Forbidden Island. 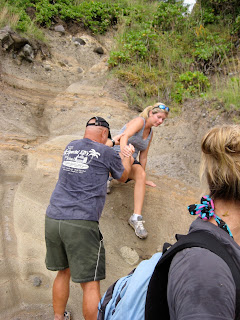 No question there were a few more strenuous downhill stretches towards the bottom of the hike. Harry was great about helping prego Kate down. About to enter her second trimester, this was her first strenuous anything since finding out the happy news, so we were taking it easy a bit. The hike starts out high, slopes down through the jungle, then goes down steeper through some rocky cliffs. There's a fairly defined trail until you get to the beach, then it's a bit of a scramble to find the other trail that leads back up and over a boulder field, which was yet another scramble. The weather wasn't great that day, but we were pretty happy about that. It wasn't raining, but the sun wasn't blazing down on us either, which made it easier to keep moving. Plus, we were glad we weren't wasting a beautiful sunny morning not at the beach (although I guess we were kind of at the beach... actually it's hard not to be near the beach on this island!).
After hiking up from the beach a short bit and climbing over the boulders, we arrived at our destination - but to get all the way there, you had to lower yourself down into this cave-like area. Once at the bottom, there was a big opening within the rocks that housed a small pool that the surge refreshed into periodically. The cool part of the hike is when you get down to this pool and get to chill out in the water for a little while before heading back up the mountainside. Little did I know our relaxing hike was about to take a different turn. 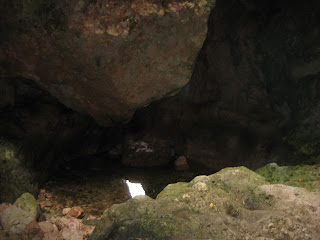 Right after taking this picture, I walked over to see if Crissy and Kate needed help lowering down through the hole into the cave area. At that point, I heard a loud, terrifying yell that echoed across the cave walls. I turned around to find our guide Harry laying on his back on the pile of rocks in the front left of this photo. He was screaming in pain with his eyes closed. At first I had the horrifying thought that he'd hurt his back. When he told me it was his knee instead, I at first wasn't sure whether that was any better, as the long, steep hike back up flashed across my mind. At this point, we were all a bit dumbstruck as to what to do. Here was this big 6-foot plus 200-plus pound guy who inured his knee at the absolute farthest point away from our transportation, cell phone and first aid kit--and only us three weakling girls and a couple backpacks of snacks and water there to help him. 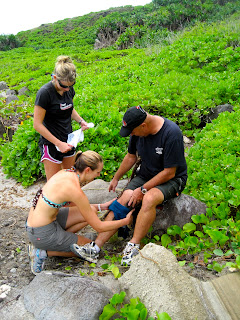 The first initial steps Harry took to get out of the cave were painful for all of us. He could put weight on his right foot, but every time it would twist the slightest bit left or right, it would buckle and he would collapse in pain onto the rocks again. The whole scenario definitely made me wish any of our husbands (who get trained in this kind of stuff... and are super strong) were there to help. I kept thinking Nick would know what to do or would be able to help carry him out of here. After watching Harry wince his way over the rocks and back onto the beach, we took a break and assessed the situation. We had a long, steep hike up the hillside between us and the car. There was no way to call anyone and medevac flights didn't even exist on the island. Harry could, in fact, walk on his bum leg, he just couldn't put weight on it if his knee shifted. Knowing all of this, we decided to try to pull a Bear Grylls and use the resources at hand to make a splint, hoping to stabilize his knee so he could still use the leg and go uphill. Using goggle straps, my shirt, two sticks, and a long, thick vine, we made a make-shift splint that kept Harry's leg straight as we started the uphill. I have to say, it worked at first, but after a while the vine just wasn't sturdy enough to hold the sticks in place and keep Harry's knee from bending. So after a portion of the hike up, we ditched the splint and poor Harry just powered through, using our shoulders as a crutch when the trail was wide enough to allow it. We made it to the car and reunited with the cell phone and the first aid kit. Of course at that point, we didn't need either. I hopped in the driver's seat and we took Harry straight to the hospital.
During the hike, one of the main thoughts circling in my mind was the emergency preparedness message that I got sick of preaching to people when I worked at the Red Cross. Things like 1) know first aid, 2) have a first aid kit nearby, 3) come up with a plan for emergencies before they happen. It dawned on me and the other girls during the hike that we were so lucky this injury wasn't any worse. Had it been a heart issue or more serious injury, we would have had no resources or time to react. When we talked about it later, we decided one of us would have had to run back up to the car to call for help, then wait for help, then start the hike back down with them. That's a lot of time spent that someone in a true life-threatening emergency situation might not have to spare. All this to say, I was reintroduced to those once annoying Red Cross safety mantras, and I'm actually thinking of reincorporating them into my life and the many adventurous things we do. I'm sure all the moms reading this will be happy to hear it. There's just nothing worse than feeling helpless when someone else gets hurt. 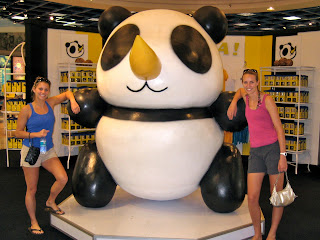 After that unexpected turn of events, we decided our first 24 hours in Saipan had been plenty adventurous, and that our fun, carefree girls weekend should officially start immediately! After picking up our rental car and with clouds still thick overhead, we decided to hit up a featured girls trip activity: Shopping! We went to the town center area and immediately ran into the quite famous "Saipanda." Don't be fooled, there are no panda bears in Saipan. Regardless, Saipanda is too cute a gimmick to just walk by. We went into a couple of surprisingly nice boutiques (the shopping in Guam is pretty bad so we didn't expect much from an even smaller island). Turns out they had some pretty cute stuff, some of it even worth buying :) 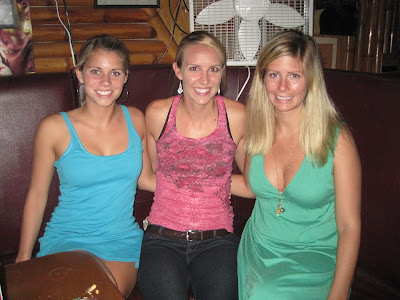 After a strenuous morning hike and a fun afternoon of shopping, we took our time getting ready then ventured out into a downpour to grab some dinner. We went to the highly recommended Godfathers restaurant and pub, where I had a deliciously fresh tuna steak (yum!). We were pleasantly surprised to find some fun nightlife on this sleepy island. Guam's location dynamics and lack of city planning just don't make it possible. Another point for Saipan.

I can't believe I'm going to say this since it was such a short trip, but I am going to have to leave Day 3 for another post. Even after all of this diving, hiking & hanging out, we went the most places and took the most pictures on the third day. So stay tuned for more pictures and stories from what I thought was going to be a really laid back, uneventful trip to the small island to the north. Who knew?

Oh, and just a quick update on Harry. He emailed to say he got a brace from the hospital and later that week he and a friend went on a slow-paced trek back down the Grotto steps and he was able to do the dive okay. He said his knee is starting to feel better. Thank goodness!