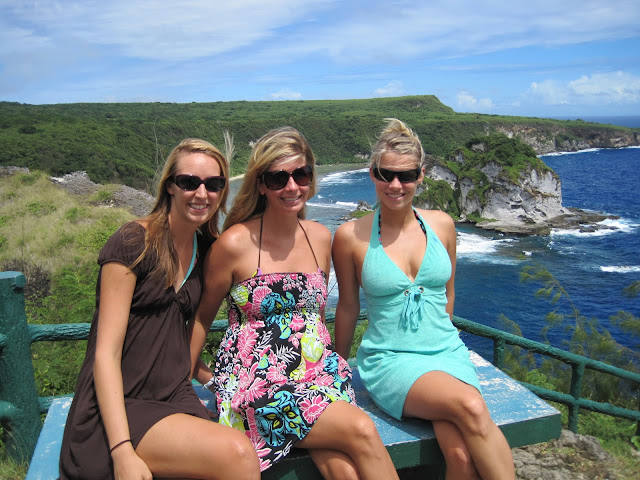 When I found out Nick was going to be off island the last three weeks of October, my mind immediately started scheming. I love Guam and all, but that's a long time to be here without him, since I definitely have the most fun when we're together. So during our snorkeling outing with my friend Kate (center), I blurted out, "Hey, we should go to Saipan while the guys are gone." Without hesitation, she said, "Sounds great." We grabbed another friend Crissy (right), and just like that, a trip was in the works.

I realize many of you still don't really know where Guam is, so locating Saipan would be even more of a stretch. Well, Saipan is 70 miles north of Guam, which amounts to a 35-minute flight. What I knew going into this trip is that there were far fewer people on this smaller-than-Guam island and pretty good diving. I expected it to be a lot like Guam, so I didn't get my hopes up that this would be the trip of a lifetime. Turns out the trip was so much better than I could have imaged in terms of adventure, beauty, cuisine, and (oh yes) even shopping.

Over the course of the trip, we kept referring to it as a getaway "weekend." What makes this ridiculous is that our trip actually spanned a Tuesday to a Friday. Of course, in the real world, most people travel on weekends, but in this pseudo reality we are all living in, Crissy a substitute teacher, Kate a boutique owner back in the States, and me a very part-time youth director, were magically all free mid-week.
As soon as our plane landed we hit the ground running. In two hours we checked into our beachside hotel, bought groceries, ate lunch, and were ready to dive at 1:00p when our guide Harry picked us up. Our first stop was the Grotto, the signature dive on Saipan. The Grotto is a giant cavern that opens up toward the land. You have to walk 100+ steps to get down to it and once at the bottom, you are surrounded by a huge rock ledge that barrels into a deep blue sea interrupted by surging waves. There are three passageways out of the cave into the bigger ocean, and all three openings are painted in the most mesmerizing blue I have ever seen. Once we swam out of the cave we were surrounded by gorgeous fish, many of the same species as Guam but so much larger and more numerous. We also had the opportunity to swim through a bunch of tunnels and passageways which felt like an underwater obstacle course. I loved every minute of it and my only regret is that Nick wasn't there to experience it with me. 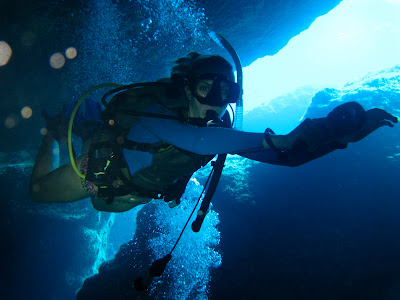 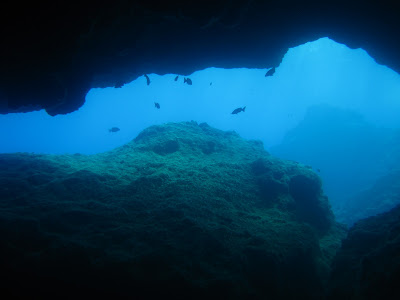 At the end of this dive we had only been on Saipan for about four hours, and already we knew the trip was worth it! The best part was that our next dive was coming right up. For this one we went to an absolutely gorgeous place called Wing Beach. It wasn't until we pulled up to this dive site that I finally put my finger on why Saipan seemed so much more gorgeous than Guam. Looking around, it was the same plants, same color water, same color sand. But the unmistakable difference is that Saipan did not have ungodly amounts of trash on the side of the road and on its beaches, nor did it have graffiti decorating its public structures. Such a refreshing site! 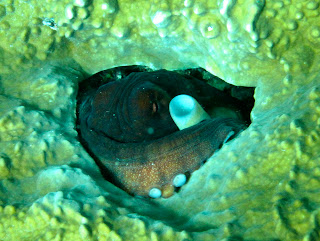 Wildlife on this dive was so much more abundant than any comparable dive site in Guam. Among the countless other fish, we saw two sea turtles (!), three different kinds of moray eels (one of which was out of the rocks feeding), and a gorgeous octopus (left) that had camouflaged itself into the reef. As I was drifting around under water looking at corals jam-packed with beautifully colored life, and discovering species I had never seen before, I couldn't help but realize that Guam too could still be like this if it weren't so overdeveloped. I've heard the rumors that Guam's reefs are shrinking in size and population, but it wasn't until seeing this thriving ecosystem on a sister island so nearby that made it all sink in. Thinking about it made me sad for Guam, angry at the locals for throwing so much trash on their beaches, and frustrated with the military for overbuilding and destroying homes for these beautiful sea creatures. It also forced me to consider my own impact to these ecosystems and what I could do differently to change things.

And right there... this recap of my underwater thought process is one of the reasons I love diving so much. I think that's what people who haven't dove the depths don't understand. Diving isn't just about swimming around ogling colorful fish and posting braggy photos. When you're under water, time stands still. There's you, water, earth, life, and the breath. Nothing else really matters, and no words can be spoken. It is relaxing and terrifying. It is time to think, and time to let all thoughts escape. It is time to appreciate how big this earth is, and how insignificant my life is in the big scheme of things. It is humbling and energizing all at the same time. For as many hours as we spend wondering aimlessly on land, it is a privilege to enter the ocean for a short but intentional time to refresh and renew.

All this and I've only covered our first six hours on Saipan! So much more to share, but I will leave those stories and pictures for next time, when the adventure continues. And (cue cliffhanger) let me assure you, it was an unexpected turn of events yet to come.

Posted by Peyton Roberts at 1:46 AM