That birthday was perhaps the best ever. Pensacola, 1997. Eighth grade. Fourteen years old. I opened the box from my parents and pulled out a can of dog food and a squeaky toy. I looked up smiling, optimistic but still in disbelief. After years of hounding (no pun intended), my parents had finally caved and I could get a dog! It was the best birthday present I could have imagined :)

Out of principal, I had always wanted to rescue a dog from a shelter, but after the first few weeks of searching, nothing had spoken to me.  Finally on a trip to the Humane Society, there was a single puppy... fuzzy white fur with splotches of brown and one blue eye. They said he was part Australian Shepherd but that his coloring was more like a Catahoula Leopard Hound, the state dog of Louisiana (who knew there are state dogs? Maybe just in Louisiana...).

He was born and conceived at the Humane Society (which, by their mission statement, is NOT supposed to happen). Before giving birth, his mother had jumped over a 6-foot tall fence and hid under a building. She was so far back the fire department eventually had to get her out. There she gave birth to 6 puppies, two of which survived. This puppy was an original, like nothing I'd ever seen, and on top of being really cute, he technically wasn't even supposed to exist (the Humane Society thought his mom was a male so they put her in a cage with another unfixed male... whoops). We took him home and after several days of brainstorming (I am terrible at naming things), decided to name him after his distinctive blue eye.

As soon as Blue joined our family, he made himself at home gnawing furniture, chewing Courtney's Birkenstocks, puking on the oriental rug, and destroying Dad's perfect lawn. We took him to puppy Kindergarten and taught him the basics, sit, stay, roll over. He eventually modified this one into a signature spin move that I'm so glad I have video of!

Blue had some special toys... ropey, the wonky ball, and Tubby (a giant plastic tub that he'd rodeo around with the rope handle between his teeth). But more than anything, Blue loved to play ball--obsessively, tirelessly, passionately. Playing ball eventually got him into some trouble. Soon after we moved to Houston, the ball took an unexpected bounce into the street, right in front of a passing Volvo. I came home from a volleyball game, got the news from Dad, and saw Blue limping around. I remember taking him to the emergency vet... still in my spandex and knee pads. Thankfully no serious injuries. Over time Blue destroyed the tendons and ligaments in his back leg, though that didn't stop him from wanting to play. He'd limp across the lawn to pick up the ball and limp back, seemingly unphased by his injury. 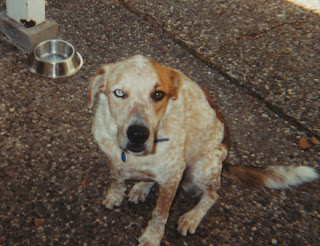 A true junkyard dog, Blue had a nose for finding food anywhere he could. I remember my astonishment when, at 10 weeks old, he took the wishbone I gave him and buried it behind a bush in the backyard, as if we might at some point stop feeding him. One December, we had to make another emergency trip to the vet upon discovering Blue had devoured Courtney's entire box of Godiva chocolates, her Christmas gift from her boyfriend. In later years, I remember some stories Dad told of Blue sneaking into our neighbor's backyard and stealing his sandwich straight off the patio table. I guess this is where the cartoons get this stuff. 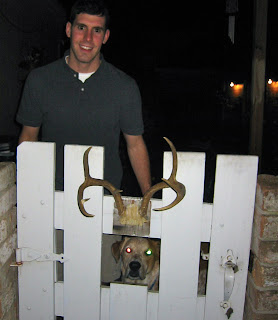 In his prime, Blue was an okay security dog. He loved to alert us when the neighborhood watch guy drove by, and he especially liked to let us know when the yard guys were mowing (as if it wasn't already loud enough). Thankfully he didn't always bark when I was sneaking in late at night from hanging out with Nick. He glared at us when we'd kick him off his couch to watch a movie, but he'd usually end up joining us. My 85-pound lap dog :)

Blue had a perch in front of the white fence that lined the side street of our house. After years of peeking through the slats, my dad finally appeased him and cut a hole so he could stick his face through and bark at our neighbors walking by. One year Nick got creative at Christmas. Luckily Texas has plenty of deer antlers just lying around. Between the antlers and the way his eyes always come out red and green in photo flashes, he made for a great Christmas picture. 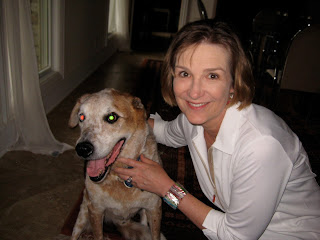 Looking back, I realize the parental arguments of why not to get a dog are, well, somewhat valid. Even though this was "my dog," there's no question my parents took the brunt of the responsibility and all of the expenses, especially once I left for college, leaving them almost-empty-nesters. Mom later admitted that having Blue really helped that transition. It was nice knowing something at home still needed to be fed and the thought of Blue getting desperate and rummaging through the trash again was a good enough reason to leave the office. Through various visits in recent years, I noticed Blue's steady and natural decline. He could no longer play ball for fear of destroying his leg. He couldn't hear very well. He couldn't sit or lay or stand up very easily. But even in his arthritic old age, he was still a great cuddler and kept a smile on his face. He was great at posing for pictures and hugs, and never lost his puppy desire to want to play, even when he couldn't. And best of all, he still found the energy in him to get excited whenever someone came home to see him.

It was that last reunion that he held on for. My parents went on a two-week trip to Europe and returned home to find Blue there to greet them one last time. Just two days later, yesterday, his poor old body gave up. A trusted friend who saw me through 14 of my 27 years.... the end of middle school, a difficult high school move, going off to college, getting married, and returning home for visits...became a beautiful family memory. No question I will miss him on my future visits to Texas, but saying goodbye is so much easier knowing he had such a wonderful, long life. I'm so grateful to my parents for that most special birthday present. Old Blue had it good... and come to think of it, so did we. Love ya pup.

Posted by Peyton Roberts at 3:25 PM