So this post is primarily for, ahem, me. But maybe there's something for you here too. During these last eight months of Paleo cooking, I have discovered some awesome Paleo recipes (and some not so awesome recipes). Most of them came from searches I did for the ingredients I had on hand or a recipe I wanted to try paleocized (my mom came up with that word). I've had a number of friends ask me for recipes recently, so I figured it was time to finally compile these all into somewhere a little more formal than my Firefox history. So if you are Paleo, or just trying to cut out processed foods, try them! They are all awesome (for real... I did not post any recipes that are not awesome).

Also, I will continue to update this page as I get more awesome recipes, so this may be a good one for paleo friends to bookmark. Cheers!

Dinner
Spaghetti Squash Casserole -This recipe by Eat, Play, Paleo is definitely part of our weekly rotation. I love it because you can really use whatever veggies you have in the fridge. I use Paul Newman's Marinara to glue everything together. The sauce isn't exactly paleo since it has sugar, but it's pretty close. Makes delicious lunch leftovers the next day (unless you live with a food monster who severely inhibits the prospect of having leftovers).

Budget Friendly Balsamic Mustard Chicken and Oven Roasted Veggies - This is an Everyday Paleo recipe that is pretty good, but even better is the side dish... brussel sprouts and bacon were just made for each other.

Stuffed Peppers - You won't miss the rice and the cheese in this one! I discovered this when I was trying to figure out how to use the ground bison I bought at the commissary. You could definitely use ground anything, but the mix of ground sausage and ground bison is really satisfying.

I also have combined some of the ingredients from the stuffed peppers into the spaghetti squash casserole (pine nuts... yum!).

"Spaghetti" in Creamy Tomato Sauce -  Another one of Sarah Frogoso's recipes. She definitely has a knack for this kind of cooking. This one's particularly quick to whip up if you use sausage that's already cooked.

Porbobello Mushroom and Sausage Pizzas - This is not the exact recipe I make (from a magazine), but it's close. I de-stem and clean the mushrooms, brush the base with olive oil and minced garlic, top with a spoonful of marinara, and load the pizza face with pepperoni, sausage bits, tomatoes, peppers, etc. I sprinkle a dash of dried oregano, basil, and crushed red pepper (for Mr. Spicy). As you can see from the picture above (compared to the one at the recipe link), our version has way more veggies and way less cheese. I bake the pizzas at 400 for 15 minutes (I don't prebake the mushrooms before loading them with toppings). I make 8 pizzas for the two of us and cross my fingers we have leftovers. It's rare.

Pork Tenderloin with Cilantro Pesto - This recipe is definitely more involved, but the pesto is really awesome. The leftovers are great as a dressing for salads and meats.

Paleo Tacos with Cabbage Slaw - I'm not a big fan of using lettuce to replace a tortilla, but the recipe here tastes really good. When we do Mexican, we usually just make fajitas like usual (meat, seasoning, peppers, onions & mushrooms) but toss the cooked ingredients in a bowl and eat it with a fork. Put enough guacamole on there and you won't miss the tortilla.

Lemony Herb Grilled Tuna - Okay yes, I am posting one of my own recipes here... it's pretty basic. We eat a lot of seafood since we can get fish so fresh. Pair any grilled or baked fish with a mango salsa (alas my fave recipe is not online, it's from my favorite cookbook) and you've got a meal that's not just healthy, it's also dinner party worthy.

Pork and Pepper Stir Fry - Swap out the brown sugar in the marinade with a little honey. I used dried ginger since that's all I had and it was delish.

Crockpot Recipes
I use the crockpot at least once a week because of weeknight meetings at church. I am very picky about my crockpot recipes because I do not like how so many of the dishes come out tasting like stew. Ew. These are a few that have made the cut and are now officially on repeat.


Salsa Pork Chops - This is one of Nick's favorites! Super easy and makes the house smell amazing.

Crock Pot Super Garlic Chicken Legs - In my opinion, the best Paleo recipes are the ones that are not Paleo but just happen to be. This one is no exception. The chicken falls off the bone.

Mesquite BBQ Pork Tenderloin - This one's great because pork tenderloin comes frozen here, so I can keep it in the freezer until I need it, thaw it the night before, and it gets me through one more day of not having to go to the store :)

Slow Cooked Chili - This one has beans. And cheese. The paleo police would argue it's not paleo... but close enough.

Spicy Shrimp in Coconut Milk - Aaaamazing!! And so easy :) I used one can of rotel + habaneros and one fresh tomato to make the base a little spicier. YUM!!

Side Dishes
Sweet Potato Casserole - I made this at Christmas and it was amazing.

Brussel Spouts and Bacon - From the chicken recipe above. Awesome side dish. Use any leftover bacon in your breakfast scramble the next day.

Roasted Veggies - Also good with a splash of balsamic vinegar added just before baking. Anything goes here... peppers, onions, sweet potatoes, zucchini, broccoli, carrots, tomatoes, cucumbers, and squash of all varieties. If it's a veggie, roast it.

Broccoli or Zucchini Fritters - These. Are. Incredible. Love this blog PaleOMG.

Breakfast
We mostly eat egg whites with a meat (steak or sausage) and a bunch of veggies scrambled in. My friend Jen blogs a lot of her paleo recipes and has some GREAT breakfast choices, especially if you are just getting started.

How to Do Breakfast Paleo Style (+ helpful tips) - This is a great place to start! Jen has a lot of good coaching for people who are new to paleo.

Omelet Muffins - These egg cupcakes are super simple to make and easy to grab in the mornings.

Egg and Sausage Bake - We have been making this casserole recipe from the Unrefined Kitchen weekly for breakfast.  Nick loves it because he doesn't have to cook in the mornings.

Snacks and Desserts
Paleo Chocolate Chip Cookies - Bakergal went through the trouble of trying six different Paleo chocolate chip cookie recipes. Once she found her favorite, she made FIFTEEN different batches trying to perfect the ingredient ratio. What results are some of the most delicious cookies you will ever eat, paleo or not. Trust me. Substitution recommendation: I didn't have macadamia nut oil for a while and I used coconut oil and they were still awesome. I also use Bob Red Mill's almond flour since it's what we have, even though the recipe specifically says not to. 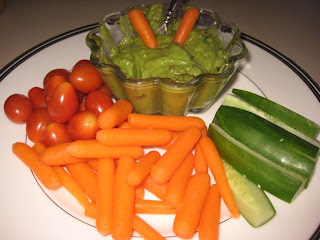 Paleo Avocado Veggie Dip - Great for dipping cut up cucumbers, pepper strips, and carrot sticks. Tastes like guacamole, but smoother so it stays on your veggie a lot easier. Your guests won't even notice the lack of crackers/chips if you set out a plate of this.


Paleo Pumpkin Muffins - I always double this recipe. Doubled it makes 18 muffins, so I freeze a dozen of them and pull them out as needed. They are ready to eat after about 30 minutes at room temp. These are delish and totally fill that craving for something doughy.

Paleo Pumpkin Pie - Not only does this taste fantastic, it is super simple to whip together. Pumpkin is no longer just for fall. We don't have fall anyways, so yeah...

Nutty Cookies - Another Everyday Paleo recipe (just buy the book!) that's been on repeat since October. These things are sooo good, and awesome to have ready to grab before leaving the house, much like you might a granola bar (which I am now aware have tons of sugar and preservatives... ick).

Perfect Paleo Vanilla Cake - I made this Pretty in Primal for Bible study this week and non-paleo people said it was really good! It's a little spongy because of the egg, but served with fruit or a coconut milk-based topping and it's, well, perfect :)

Any favorite paleo recipes to share? Link to them in the comments please. Awesome recipes only!
Posted by Peyton Roberts at 10:08 AM