After spending the past week with my dear friend April on Guam and in China, I have so many thoughts and pictures and stories I want to share with you. But before I do that, I want to recognize this incredibly important holiday we find ourselves in the middle of... Memorial Day. 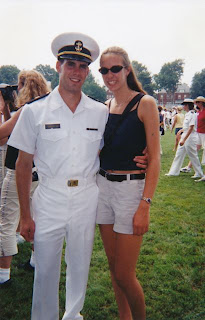 This weekend is important to me personally for a number of reasons. Exactly 11 years ago, I stood before a crowd of thousands in Houston, TX to deliver the Valedictorian address I prepared for my high school classmates. I had a brand new super hot boyfriend (named Nick!) I had been dating less than a week. We had no idea at that point what the future would hold, but we knew enough to trust the future would be good.

Exactly 7 years ago this weekend, that boyfriend (turned fiance!) walked across a stage and shook hands with President George H.W. Bush as a commissioned officer in the U.S. Navy. It was a glorious day for all of us who had witnessed four years of collective hard work from him and his classmates. And it meant Nick and I were officially in the Two Percent Club. Academy legend has it that only two percent of the couples who are together at Induction Day are still together at Commissioning Day four years later. You better believe that is one milestone I will be forever proud of.

Five years ago on Memorial Day weekend, the world as I knew it changed forever when my grandmother Bea lost her short but intense journey with pancreatic cancer. I got the difficult phone call from my mom in Florida. Even though I'd had a chance to say goodbye in person and knew her departure was imminent, I was devastated. No one in my personal inner circle had been taken so permanently before that day. I could not imagine walking an earth where she no longer did. I trudged forward so hurt, lost, and aching. My little heart just didn't know what to do. Nothing had changed in my day to day life across the country, and yet, it seemed everything was different. We went to her memorial service in Florida a week later and, as tears streamed down our faces, we sung our hearts out to Eternal Father Strong to Save, also known as the Navy Hymn, which she had personally requested be sung that day.

Despite all these powerful Memorial Day memories and the fact that this weekend comes every year, I consider this to be only my second true Memorial Day. I say that because this time last year was the first time I had ever personally witnessed the suffering of friends who, unlike me, never had a chance to say goodbye to their loved ones. I guess that's why Memorial Day feels so different now. There are names and faces of those who never returned, and of those who returned but were never the same. Those who were once so familiar are now but a memory. My heart aches for their families and the insurmountable adjustments they were forced to make having to walk this earth, one step and one breath at a time, learning how to live here without their hero. 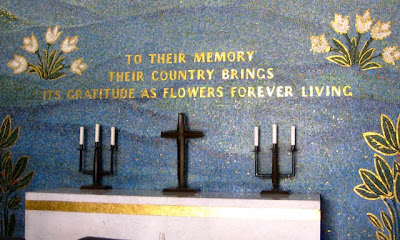 And so this Memorial Day weekend, amid the sorrow I find a strange sense of joy in taking a long pause to honor and remember those for whom the echo of taps still resonates. Today we dedicated the flowers at our church to brothers Brendan Looney and Clay Hunt. In their honor and the honor of our nation's other valiant souls, I joined in as the soprano in a four-part a capella harmony of Eternal Father Strong to Save. I so appreciate my grandmother's dying wish of having that song played at her service. Somehow it helps me to weave together the intense emotions of grief too many families must be feeling with the notes that plea for God's protection for those still serving.

Having just returned from a country that is most certainly not free, where the opinions and ideas on this very blog are completely inaccessible, this year I find myself all the more grateful to live in the land of the free, the home of the brave. Unfortunately freedom has come at a tremendous cost, which is why the rituals of remembrance are so important for every American to participate in, in any way whether big or small. 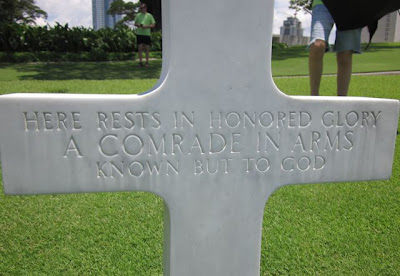 Just last month our Philippines service team visited the American Cemetery in Manila, home to 35,000 burial sites of American and Allied troops from WWII. Many of the remains, marked with a cross, are of soldiers and sailors whose names are "known but to God." As I looked out over the rows of crosses planted in pristine fields of bright green grass, I couldn't help but be overwhelmed by the physical demonstration of sacrifice before my eyes. In a moment of hopelessness, I turned to my journal wondering how to make sense of all these lives lost, all these families in pain. What can I possibly do to make this better? 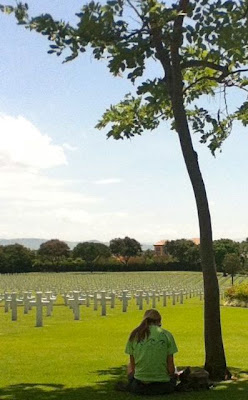 I thought of all those eyes looking down on me from upper realms. I thought, what might they want from me, from us?

"Live so my sacrifice is worth it," I heard them say.

I believe there are simple but intentional things all Americans can do to serve our country that don't involve joining the military. We can serve by seeking out quality American made products instead of cheap bargains made in China, every penny a vote toward American jobs and a stronger economy. We can serve by actively helping out our fellow military and veteran families, the 1% of Americans who have been personally affected by 11 years at war. We can serve by choosing to strive for our personal best at home, at our jobs, in our relationships, for our environment. We can stay healthy and remove burdens from our healthcare systems. We can stay out of trouble and remove burdens from our criminal justice sectors. We can support nonprofits and volunteer and pick up trash and recycle. There are so many ways to incorporate serving and bettering our country into our everyday lives.

Make no mistake. The onus is on you and on me to shun complacency and take action. I believe Travis Manion has stated this best: "If not me, then who?"

Oh hear us when we cry to Thee for those in peril on the sea.

The notes of the Navy Hymn ring in my soul today. Once again I feel those valiant eyes looking down upon us. It is our job, dear friends, to live in such a way that makes their sacrifice worth it. It is a tall order, but none so encompassing as what each of them has already given... everything. 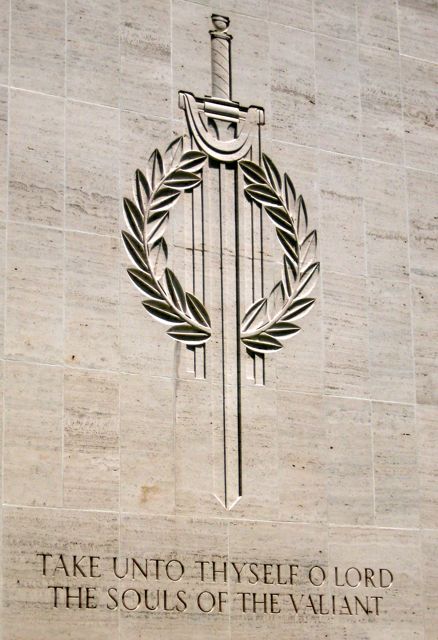 Posted by Peyton Roberts at 6:42 PM