There have been so many times I have asked Nick to write a guest post about all the awesome stuff he does out here (yes, in addition to the stuff I write about that we do together), but he's always declined... until now! His brother Matt came out last month (right between my Manila and San Diego trips). I was a little travel weary so I opted out of many of their exhausting adventures. But it was great to have Matt out here. Enjoy Nick's Island! I certainly do :)


So, for once, I am going to hijack Peytsisland and try my hand at blogging.  In mid April, my younger brother Matt made his way out to Guam from Austin, TX.  Back in December, I decided to burn a few frequent flier miles on Matt’s ticket as a Christmas present. Okay, so it was more than a few… but that’s okay because I flew almost 200K miles last year.  We both worked it out to get some time off from work, and proceeded to make the absolute most of our five days together.

I feel like Peyton and I lead a fairly active lifestyle, and a weekend that contains scuba diving, hiking, snorkeling, golf, and a couple of workouts is more of the norm than the exception.  That being said, I think that the universe was completely unprepared for the whirlwind that occurred when the Roberts boys got together and had five days of free reign on Guam. 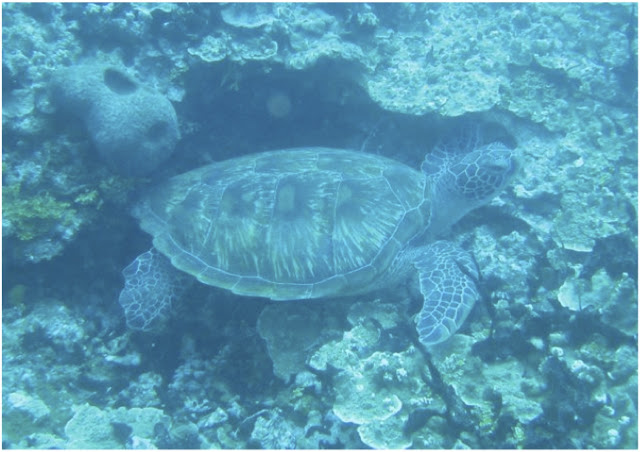 The first morning, Matt and I went scuba diving at Gab Gab.  While Matt didn’t complete a formal certification course, he did read the instruction book on the way out.  In the same way, I am not a certified instructor, but I did feel very comfortable with both of our abilities and competence  levels.  We discussed all of the aspects of diving and then I had him setup his gear.  We got in the water and did some skills work.  He did everything as instructed and totally rocked the skills portion, so we ventured out a bit further and dove along a wall at about 35 feet.  On his first dive ever, Matt came face to face with a green sea turtle, had total control of his buoyancy, and surfaced after 50 minutes with 800 psi of air remaining in his tank.  For you non-divers out there, that is quite impressive for a first timer. 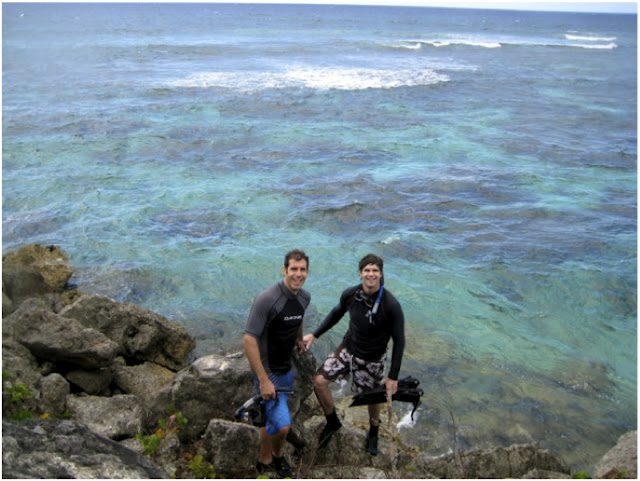 In the afternoon of day one, Peyton joined us to snorkel the entire 1.5 mile length of the Callahan Bank breakwater on the ocean side of Apra Harbor. 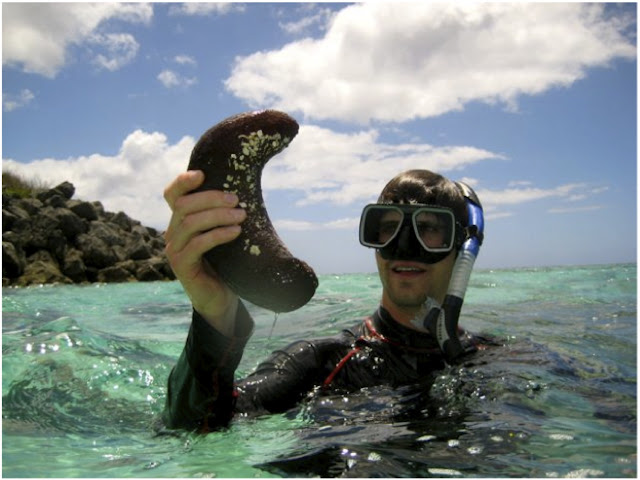 Matt was obsessed with these sea cucumbers. 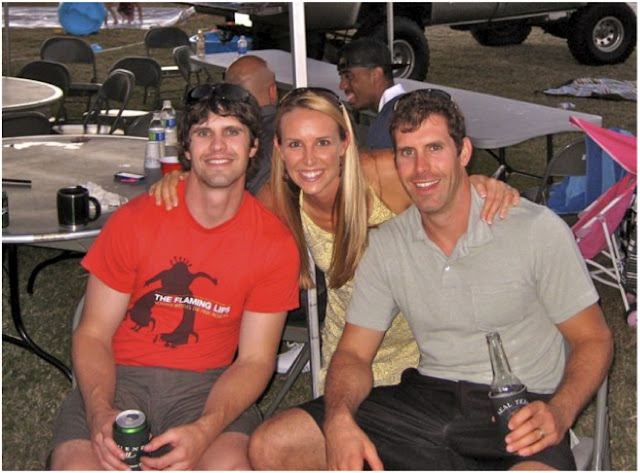 It just so happened that one of the usual neighborhood parties was going on the first night.  Due to the unique situation of living on a tiny island, everyone is pretty much always available to hang out, BBQ, and have a few drinks.  Matt made me laugh when he said, “this is just like college, except that everyone has a nice house, money, and there is plenty of more expensive beer.” 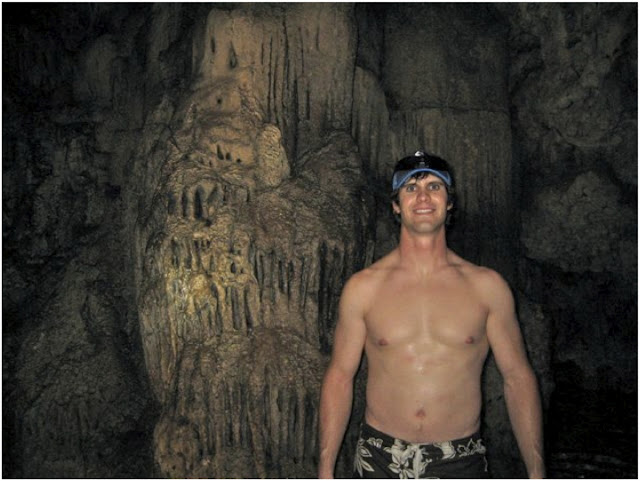 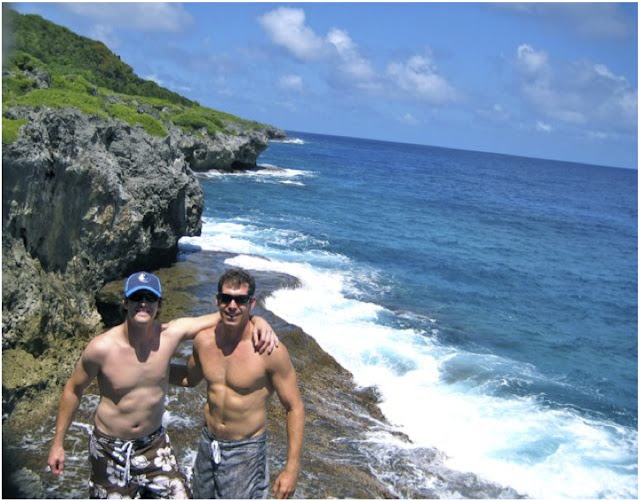 Followed by a hike to the top of Guam’s highest point, Mount Lam Lam.

DAY 3: Day three consisted of paddle boarding and swimming in and around the cliffs and caves of the Orote peninsula. 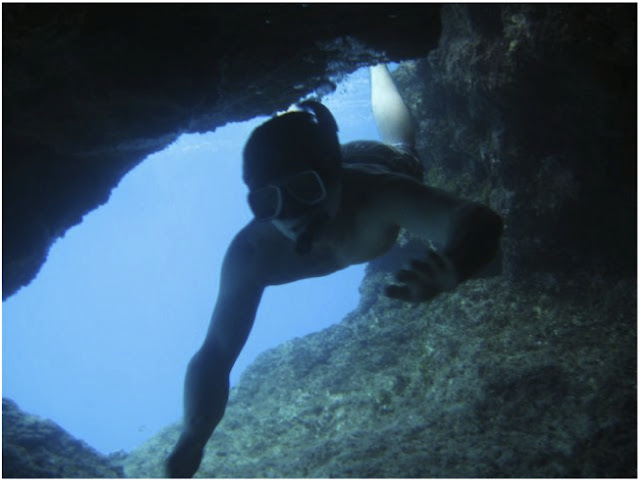 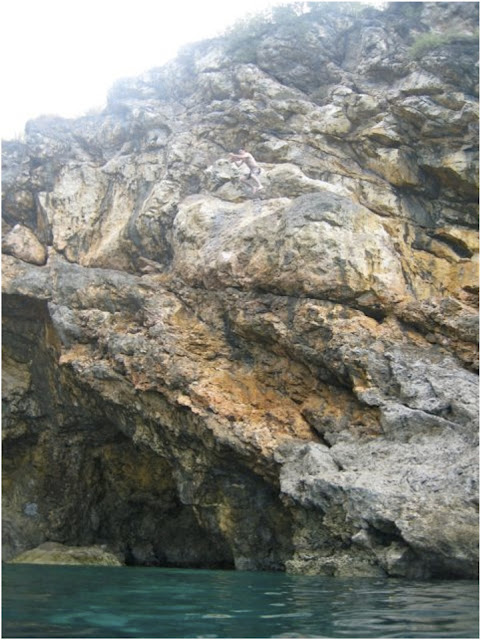 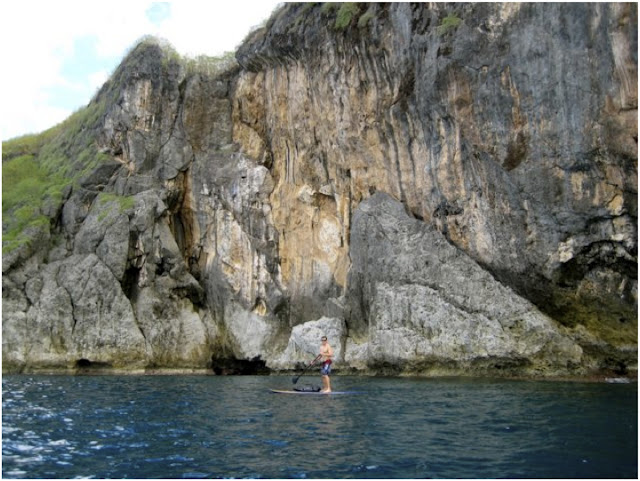 Paddle boarding along the awesome cliffs. 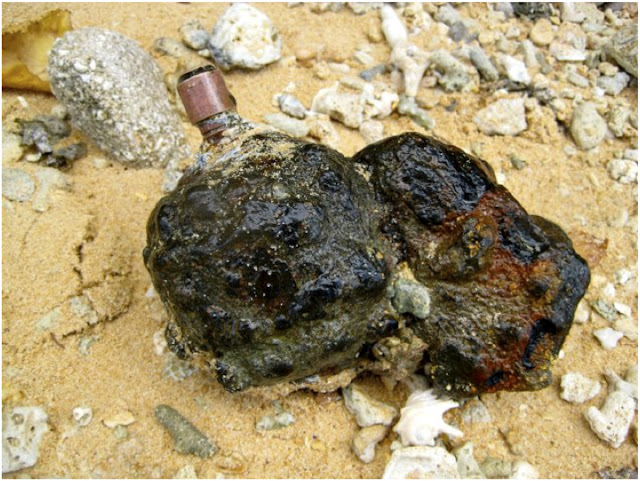 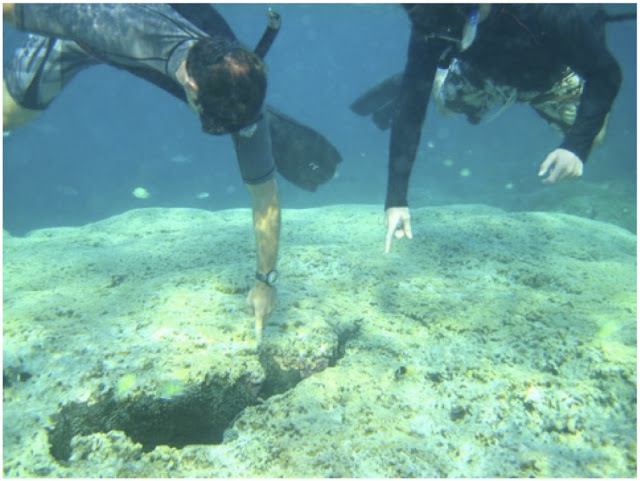 After the dive, we just had to cram one more thing in the day, so we went snorkeling at the Fish Eye marine park.


DAY 4: Another dive in the morning.  This time at Gab Gab II where Matt got to feed the Giant Trevally with a package of pepperoni.  We saw two more sea turtles, bringing the total to four turtles in three dives!  To put this in context, for the first four months and about 20 dives that Peyt and I did on Guam, we didn’t see a single sea turtle… 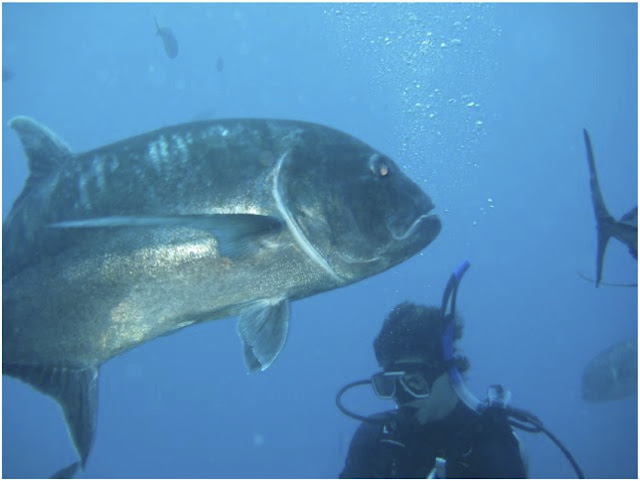 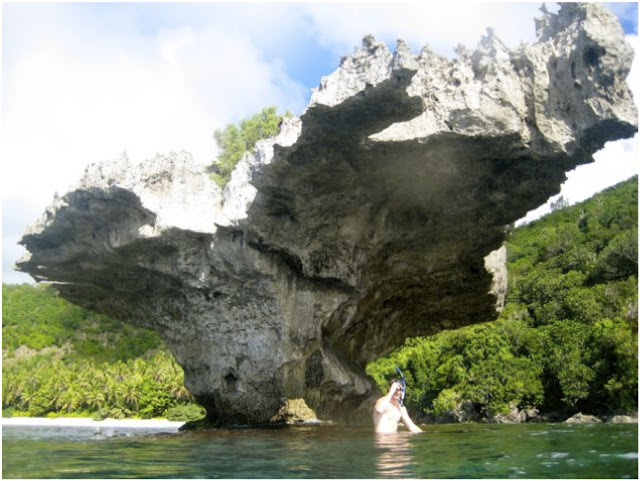 After diving, we headed up to Haputo for some more hiking and snorkeling.


On our final day, Matt and I did the Xterra off road triathlon mountain biking course on the backside of Nimitz hill.  15 miles of rough and rugged terrain in the heat and humidity.  I think that I almost killed Matt with this one, but he pushed through like a trooper. 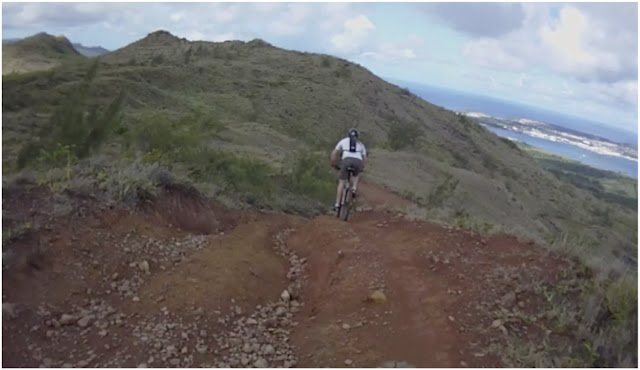 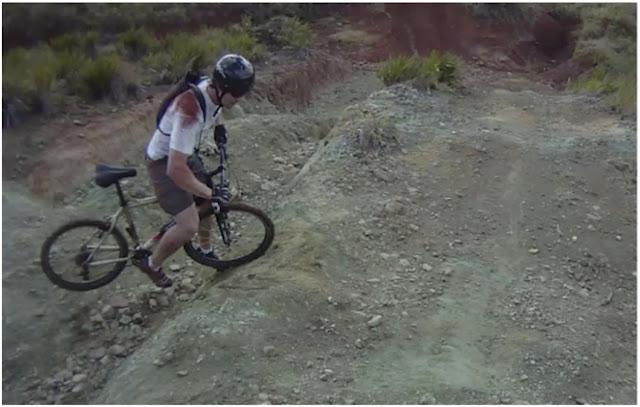 I pulled a screen capture off of my helmet cam video of one of Matt’s wipeouts that I got on film. 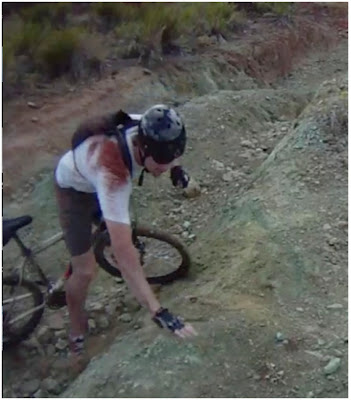 Over the handlebars he goes.  Ouch!


After mountain biking, we crammed in one more dive.  This time to a Japanese WWII seaplane that lies upside down in about 90 feet of water.  The visibility wasn’t very good, so I didn’t bother to snap a pic. 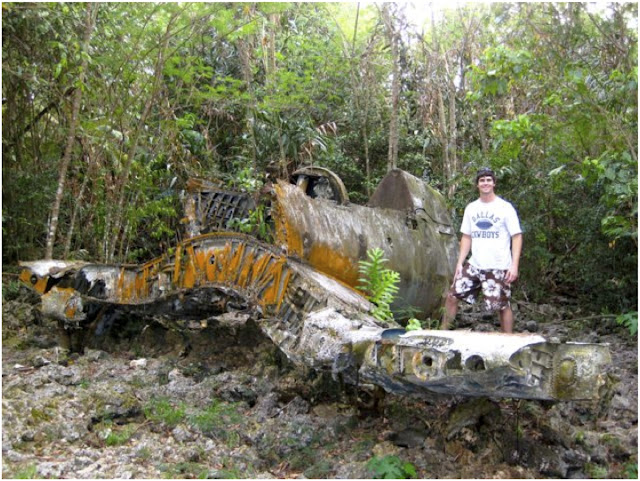 Our final activity was a short hike to a crashed WWII Corsair fighter about a mile from our house.

So, like I said, we crammed about as much as humanly possible into 5 days of exploring on land, water, and underwater.  It was far and away the best quality time that my brother and I had spent together in over ten years and I am so glad that we had the opportunity to make it happen.

Thanks Nick for being my first guest post! And thanks Matt for coming out to see us. Hope you have recovered from the nonstop adventuring :)
Posted by Peyton Roberts at 10:07 AM