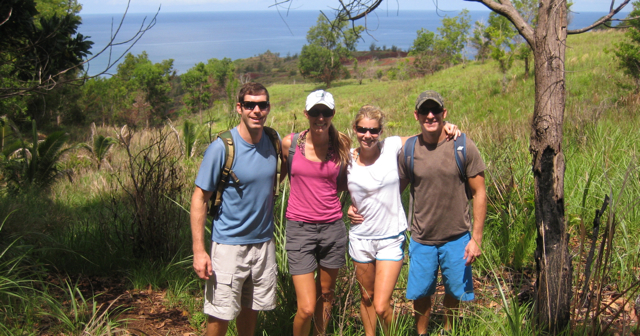 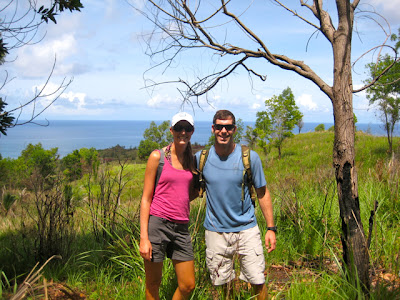 Saturdays are great days for Boonie Stomping, especially because it means our guys can go too! This past Saturday Nick and I joined our friends Crissy and Dave to hike to Sella Bay and back. Looking at our hiking guide that morning, we figured out you can hike from Sella Bay all the way down the coastline to Umatac near the southern tip of the island. There seemed to be some sort of trail connecting everything. So rather than hike in and back out, we dropped a car at Umatac and started our hike down to Sella Bay. 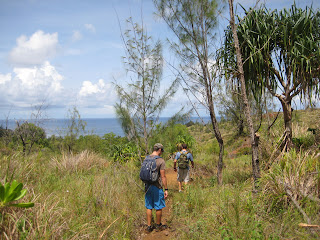 The great part about this hike was that we started high and ended at sea level. We had a bit of a muddy descent getting down the first 1.5 miles of trail, but it was so nice knowing we wouldn't have to trudge back up it later in the hot sun. Another bonus was having a waterfront view for our hike. Every time it started to get really hot (and we were all dripping with sweat in the first 10 minutes), we could look up and remind ourselves that a dip in the ocean was not too far away. Here are the pictures from the rest of the 5-mile trip down the coastline: 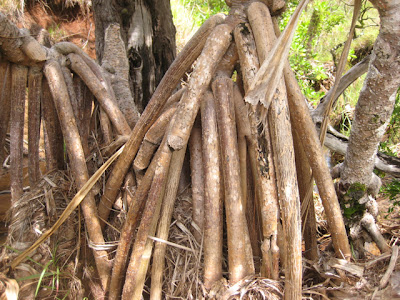 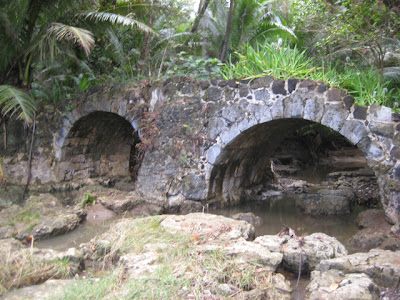 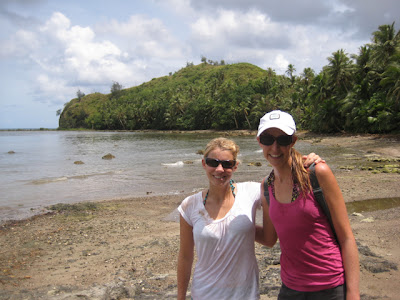 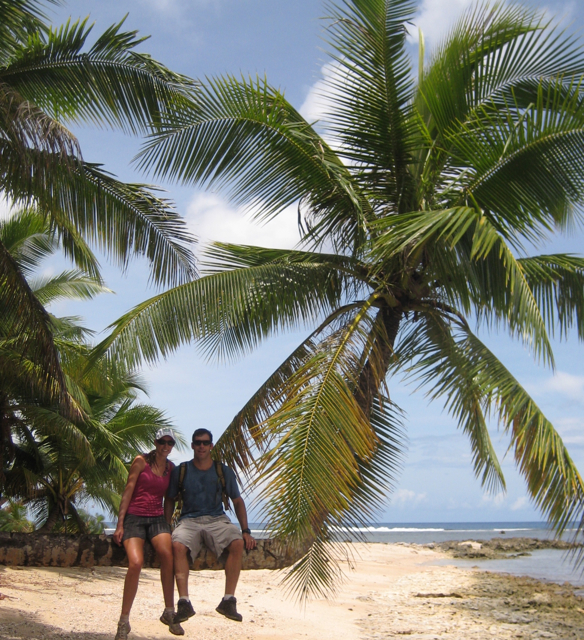 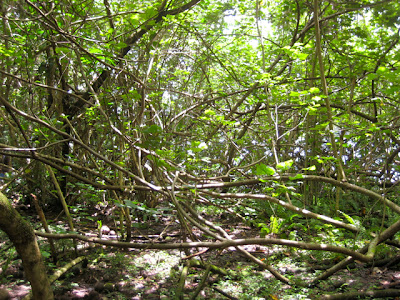 Thick jungle we had to hike through to get around Cetti Bay.
Had to be a little creative with this here "trail"...
often waded through the ocean or made our own. 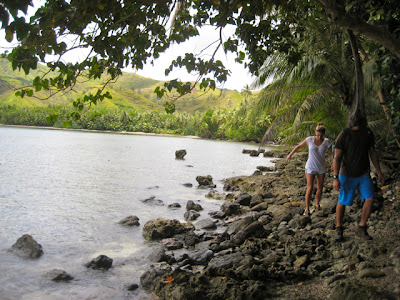 Crissy & Dave dancing across the rocks... aka the "trail." 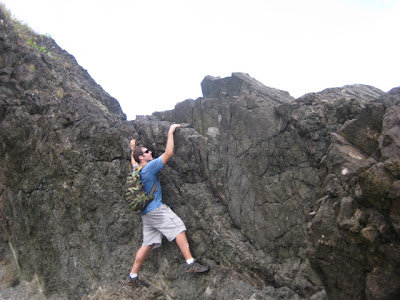 Hiking along the coastline, we ran out of sand (and trail) when we hit this wall. I was reminded of the little kids chant: "Can't go under it, can't go through it, can't go around it, must climb over it!"
Actually we could totally go around it, which is what the rest of us (except Nick) did (show off). It just meant wading waste-deep in the ocean. And there are no pictures because I did not trust myself to not drop the camera (which sadly was not in its waterproof case). 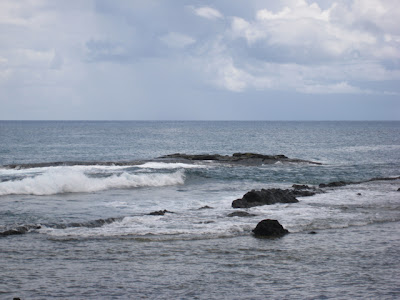 Awesome snorkel-ready lunch spot we discovered.
Nick looked down and immediately saw a turtle chilling on the bottom 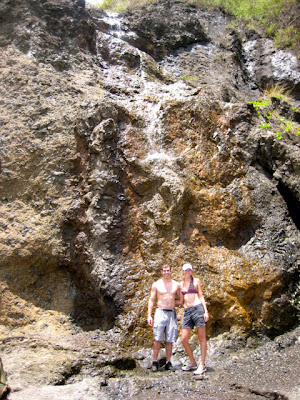 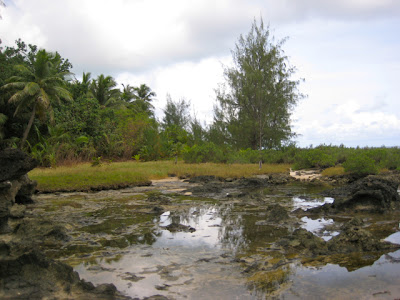 So many different terrain changes across the five miles 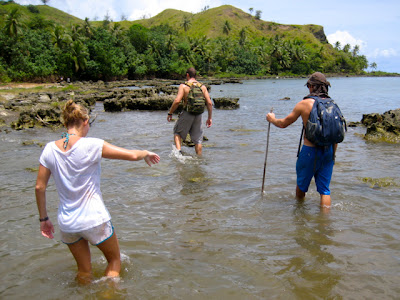 Lots of wading across rivers where they meet the sea.
Hey Crissy, good call wearing all white on a hike through the ocean & jungle... 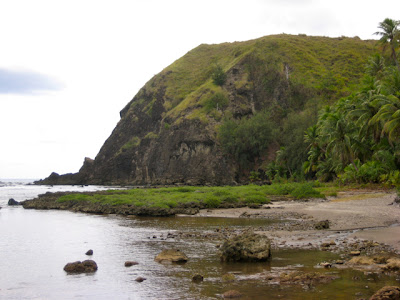 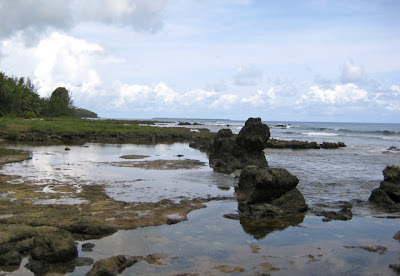 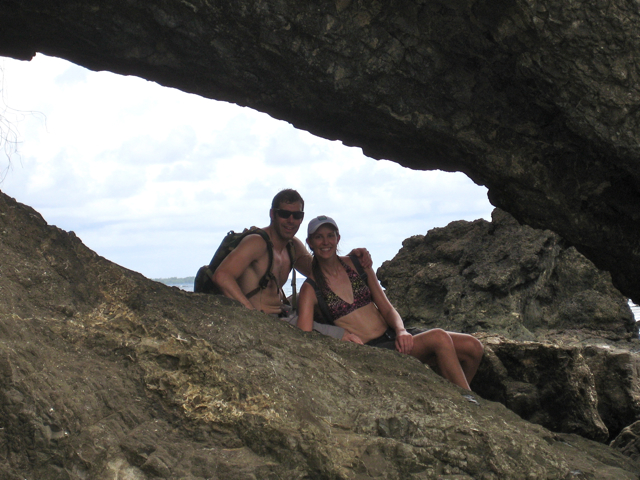 Still no trail, but we found this really cool rock archway...way better than a trail. 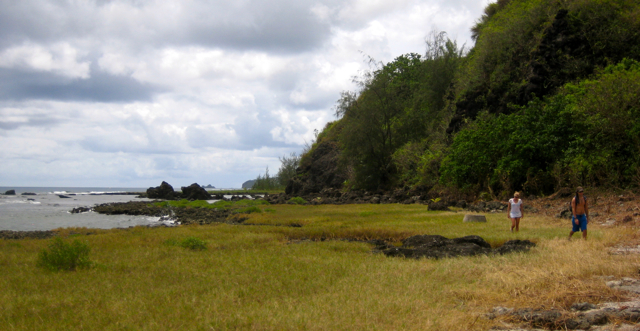 Choose your own adventure (aka, make your own trail) 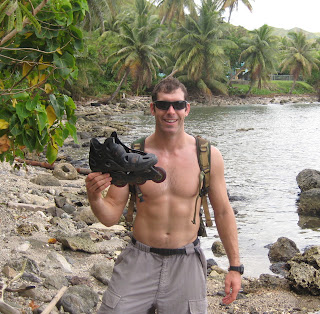 All in all, a gorgeous hike with lots of different land and water features to feast our eyes on. Nick and I had previously seen this coastline in its entirety from our boat, but nothing beats trekking it on foot. We spent three hours out there and hardly saw another human or even evidence of a human. In fact, some of the only people we did see (fishermen) said hi, introduced themselves, and immediately offered us some kelaguen (food!). (Side note: After they offered us the food, they realized they had already eaten all of it, so we didn't get to try it... but still a nice gesture). The folks down south are known for being extra hospitable round these parts, and they live up to their reputation every time. This is probably my favorite little section of the whole island... pristine jungles, beautiful beaches, and friendly faces (though we hardly saw any of them).

Heck, we hardly even saw any trash. Until we got to our end destination at Umatac... and Nick made the "random crap in the jungle" find of the day. Could have used some roller blades on the trail earlier...
Posted by Peyton Roberts at 3:06 PM