The Rest of the Story

The last two weeks since being back from the mission trip have been some of the most uneventful since we moved to Guam almost a year ago. While I was thrilled that no one got sick during the trip, reality set in once we were home and Sunday night I found myself with a scratchy throat and runny nose. A cold was setting in, meaning another week sick on Guam. Awesome. For once I was selfishly glad Nick was off island so I could indulge in some mindless down time and get some much needed rest. In fact, he was off on a unique adventure of his own... a high altitude warfare training demo course in the Kashmir Range of northern India. I should be writing about that since it's MUCH more exciting than anything I did in the past week. But alas, he's gone again and taken all of his fantastic pictures and stories with him.

Those who have been following know the last two months have pretty much done me in in terms of highs and lows. In a span of eight weeks I went from being the sickest I have ever been to experiencing the culmination of seven months' work planning an overseas spiritual retreat almost entirely on my own. And in the weeks between, I attended two family funerals and held three new babies. Perhaps the most trying part of all, though, was a week before we left for Manila. Somehow the pneumonia symptoms started coming back. There was a weakness that I don't know how to explain, a weakness I have only felt during those horrible eight days as a prisoner on the couch. I tried to explain the feeling to Nick and here's the best I can do... it feels like my rib cage is a cymbal that has just been hit with a xylophone mallet and is still vibrating. I couldn't feel the vibrations with my hands or anything, but every breath in and out felt so unstable, took so much work, reminded me of what I had been through not so long ago. I found myself getting exhausted doing usually simple things, like running errands and cooking dinner. I had to build in rest time after any activity, and I don't mean hiking or working out. I mean doing laundry and unloading the dishwasher. Trips to the gym came to a screeching halt.

So packing for this trip, making sure we had all the needed supplies for the ministries we were planning to do, at the orphanage, the school, the church and also within our group, suddenly became a bit of an undertaking. Worst of all, though, was the thought in the back of my mind that relapse from pneumonia is quite common. In fact, I've read over and over that the relapse is often worse than the original illness, which was a thought so terrifying I decided that if given a choice, I would rather not go on the trip than have to be that sick again. A week out with a low grade fever beeping in on the thermometer and fatigue setting in after the most mundane activities, I did some serious praying but also made peace with the idea of not going. My job, after all, was to plan this trip for the youth. The trip was planned and could technically go on without me.

Of course, now we know all that has happened since. I most definitely needed to be with our group in Manila, and I am so grateful that the Great Physician brought me the physical strength to leave for the trip with confidence and power through the week on small amounts of sleep and a constant need to be on. Arriving back on Guam, though, meant I was due for the inevitable... one of the things I find most difficult to do, and am pretty awful at, and have now been forced to work on: To rest.

So for the last week I have done little except go to the beach, meet friends for lunch, write thank you notes, read Harry Potter on the couch (under my Gator Snuggie), and, most of all, sleep. I even missed church this week... the Fourth of July service, my favorite service of the year after Easter and Christmas Eve. The patriotic music is always such a great reminder of the connection between freedom from oppression that we have from being Americans and freedom from death that we have from being Christ's. I hated missing it. I woke up to go, brushed my teeth, and got right back in bed (even despite having already made my dish for the barbecue potluck in my American flag dish... sigh). But waking up at noon that day after 12+ hours of sleep, I started to turn a corner. The cold was subsiding and, best of all, I started feeling like myself again. 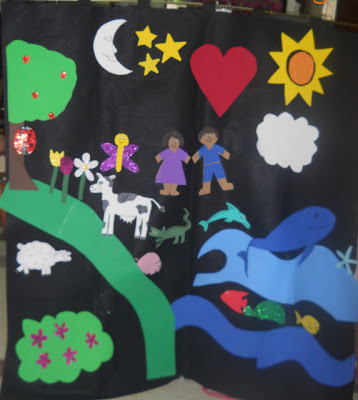 After hearing the classic Creation story, Genesis 1-2:4, so many times during our trip and in the weeks preparing for it, I have now come to appreciate the Seventh Day... the day God rested after a fluster of creativity and imagination coming together to create our world and everything in it. The Creation board is such a great symbol, now, of everything that has come to pass the last few weeks creating our experience in Manila. And of course, the Seventh Day wasn't the end of the story. It was, in fact, the jumping off point for all of humanity to be set in motion. But that day of rest had to be there. And if the God of the universe can indulge in some down time, might not be such a bad idea for little old me either. And on that note, please excuse me. Harry Potter awaits...
Posted by Peyton Roberts at 10:28 PM