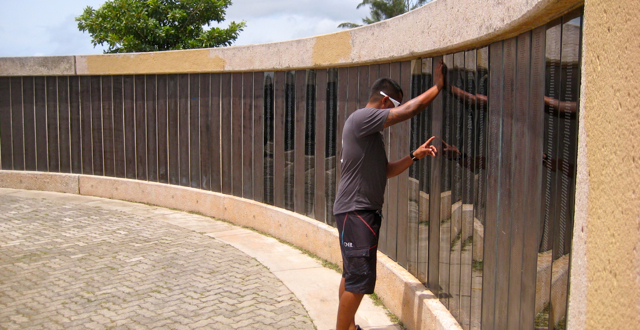 On Thursday I went on a pre-Liberation Day historical tour, organized by the Outdoor Recreation department on base. They're the group that puts together the Thursday hikes I usually go on to explore more of this beautiful island. This past Thursday was exactly a week before Guam's biggest holiday, Liberation Day. Celebrated on July 21st, this holiday marks the day in 1944 the U.S. Marines first landed on Guam to fight against the Japanese, who had taken over the island in 1941. After 21 days of fighting, Guam was no longer under Japanese control, and tens of thousands of Chamorros who had been enslaved in concentration camps for several years were suddenly and immediately set free. 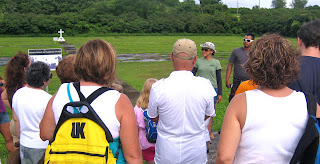 Interestingly enough, the tour started in our own backyard. Right on base, across from Sumay Marina, where we often launch our boat, stands a white cross monument that marks the place where a thriving Chamorro village once stood. Long before the Navy base was here, Sumay village was a bustling place positioned safely inside Apra Harbor where information, mail, and goods could pass from Guam to the rest of the world. In the 1920s, sea planes began landing here (which explains the restaurant name that's now perched by the cove called Clippers Landing). There was also a radio communication post where news could arrive from Japan and the United States much more quickly than it ever could before. This cross, and the history it represents, stands about a mile from our home. 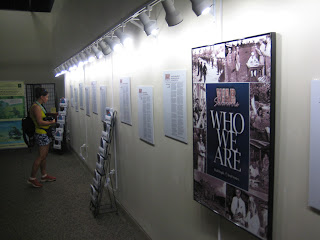 Our next stop on the tour was right off base at the National Park Visitor Center. This is one of those places we drive by every time we leave base, and yet rarely notice it. We watched a 30-minute film that told the story of Guam's invasion and liberation. I was familiar with the story, but it pieced together some of the gaps for me... like how the U.S. got Guam as a territory in the first place. The U.S. acquired the island in 1898 as a result of winning the Spanish-American War. Since that time we had a small contingency of American Navy and Marine personnel who posed as leadership for the island. But the post was so small that when Japan started dropping bombs on December 8th and then attacked not long after, U.S. personnel were forced to surrender almost immediately and were taken to prisoner camps in Japan for three years until the war ended. 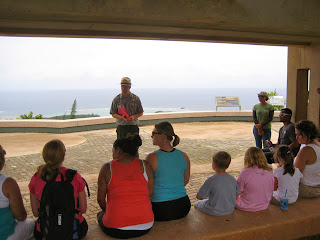 After the video, Ranger Dan started the rest of the tour. Much of the tour catered to kids, which made the day go a little slower than I'm used to, but also added a lot more elements of fun. Instead of getting stats and facts, the rangers told a lot of stories. There was one story in particular that really stood out to me that Ranger told as we sat on top of Asan Bay Overlook, imagining the Philippine Sea scattered with Navy vessels the day of that infamous attack. I'm going to retell the story now to the best of my ability, and though the pictures won't align with it, I hope you can see why I found this story so inspirational. 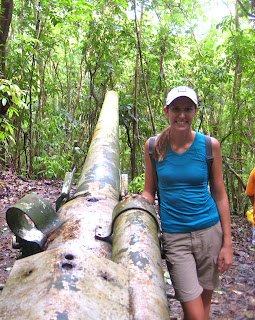 In 1934 a boy named Jorge graduated from high school here on Guam. At that time there were no colleges, and being from a prominent family, he left Guam to go to college in Japan. There he learned Japanese and got a degree. After college he returned to Guam and the reality of few job opportunities here at that time. He told his dad he was enlisting in the U.S. Navy, a career route that many Chamorros still take today. Despite having a degree, he enlisted as a Mess Assistant. He left Guam to start his military service. On Dec. 7th, 1941, Jorge was serving on the USS California, a ship stationed in Pearl Harbor, Hawaii. Despite the bombings that were going on, a higher up had called him to bring a sack of potatoes up from below deck. As he brought the potatoes up amid all the chaos, he witnessed the USS Arizona get bombed and sink in just nine minutes, entombing hundreds who did not make it above deck in time. Jorge survived that day, something more than 3,000 others did not. 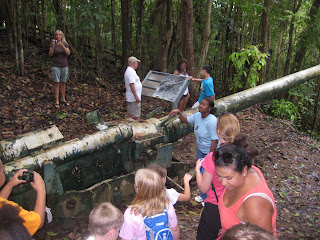 Meanwhile across the international date line, on Dec. 8th, the Chamorro people were in mass celebrating one of their traditional Catholic holidays. Out of nowhere, the sound of Japanese planes filled the skyways and bombs were dropped on Guam's shores. After the Japanese invaded, Jorge's family was told that U.S. forces at Pearl Harbor had been obliterated. They wondered if Jorge was alive and if they would ever see him again. 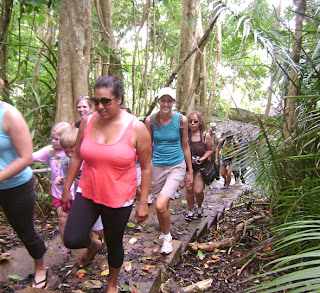 Meanwhile Jorge heard the news about Guam and wondered if he would ever see his family again. Over the next few years, his family members, like many others, were forced to live with and work for the Japanese, who took over the island forcing their language and culture on the local people, beheading anyone who posed a threat to their occupation of the island. There was one American sailor named George Tweed who had not been taken prisoner by the Japanese. Instead, he hid in the jungle with his radio until a few weeks before the Marines showed up. Chamorro people brought him food, recognizing him as their hope for escaping their imprisonment. Tweed was later very instrumental in positioning U.S. forces ahead of the attack. 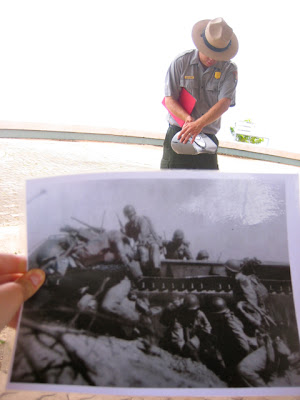 After Pearl Harbor, Jorge got picked up to be an assistant for Admiral Halsey. And a few years later when it became apparent that the U.S. would need to reclaim Guam from the Japanese, Jorge became a huge asset as the U.S. created their strategy because of his local knowledge of the island's terrain. Jorge transferred to the Marines so he could be part of the attack. On July 21, 1944, as his ship approached Guam's coastline, he saw his homeland for the first time in seven years. Guam's shores were emanating with smoke and flames from three previous days of bombings by the U.S., which destroyed towns and jungles in an effort to weaken Japan's infrastructure ahead of the attack. As he boarded the amtrak to head ashore with his fellow Marines, he prayed that he would make it to shore, to set foot on his homeland one more time. At this point in the story telling, Ranger Dan played an audio recording of an interview that Jorge did for the radio just 30 minutes after he landed on Guam's shores. At that point he still did not know if his family was okay or how the fighting would turn out. But he was grateful to have made it to set foot on his homeland one more time. 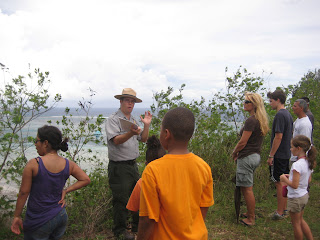 Many American Marines did not make it that far, as the Japanese fought hard to keep the island. The Marines who did make it to shore landed on beaches in Asan and Agat, both north and south of Orote Peninsula where the navy base and our home now stand. After 21 days of brutal fighting, the U.S. accepted Japan's surrender and freed the Chamorro people from Japanese concentration camps. In total, about 1,200 U.S. Marines gave their lives in the Battle of Guam amid a total of 8,000 casualties. It is this sacrifice that is jubilantly appreciated each Liberation Day here on Guam. Many of the elderly population emerge to tell their story of being held captive and then released from slavery under the Japanese. Had they not persevered, the Chamorro culture and language may not have survived. 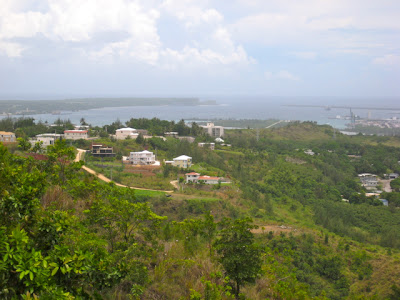 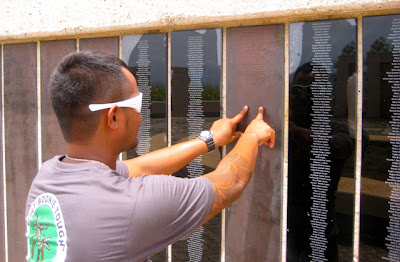 It was at this point I looked over and saw one of our hiking guides, Jesse, pointing toward the memorial wall etched with names. Amid the thousands of names enscribed, Jesse pointed out the name of his grandfather, one of the Chamorros listed who endured the Japanese occupation. I couldn't help tear up as it started to sink in what this day really means for these people. Like the rest of us, all they wanted was to live in freedom. That freedom was taken from them, and regardless of how you interpret the U.S.'s intentions for coming on shore that day, you cannot overlook the bravery and determination of the young Marines who fought to overtake this land and free these people. In terms of U.S. military history, it marks one of our nation's finest hours. 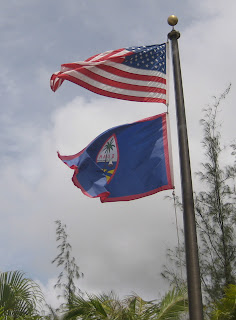 And so to finish the story, Jorge was eventually able to find his dad (whose first words as he saw the uniformed man approach were, "Son, I thought you joined the Navy!"). Jorge continued serving in the military until his retirement in Florida, but he came back to Guam just a few years ago. Ranger Dan showed us a picture of an old Chamorro man speaking at a podium at Asan Bay Overlook where our group was standing. In his remarks, Jorge announced that despite being present for the bombing of Pearl Harbor, and despite knowing what his family members went through under Japanese occupation, Jorge said he never once felt resentment or anger towards these people. He said (and I wish I could find the exact quote), at the end of the day, we are all human beings. All we seek is freedom and peace for ourselves and our families.

So this year, on July 21st, Liberation Day, I have a little better idea of what the big fuss is about: Freedom and peace. In all the world I can think of no better reason to celebrate.
Posted by Peyton Roberts at 10:01 PM