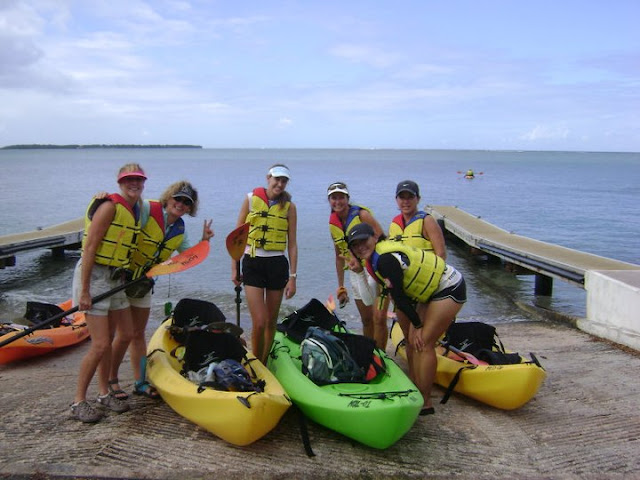 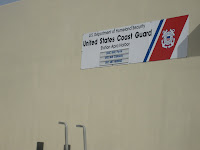 On Thursday, I joined the base boonie stompers for a little something different: Kayaking! The weather the week before had been somewhat typhoon-ish. We'd been having 30mph gusts for 5 days straight, and currents had been pretty crazy too. The trip was rated "difficult" by the recreation staff, so we were a bit leery when our first stop after loading up the vans was to the Coast Guard station... to turn in our emergency contact information "just in case." Always good to be prepared, I suppose. 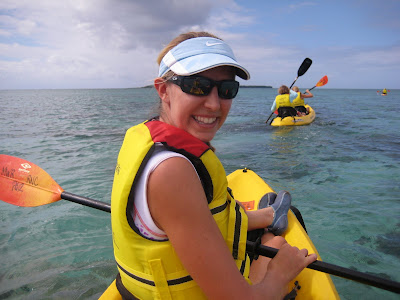 Anyhoo, we drove the 30 minutes down to the southern tip of Guam, Merizo pier, put the kayaks in the water, and off we went. From this picture here, it may look like we were *behind* some other kayakers. This was the VERY start and we were one of the last kayaks to put in the water. Rest assured, we got to Cocos Island first, thank you very much (uhhh, it wasn't a race... but it's always a race... I think being married to Nick has totally rubbed off on me). 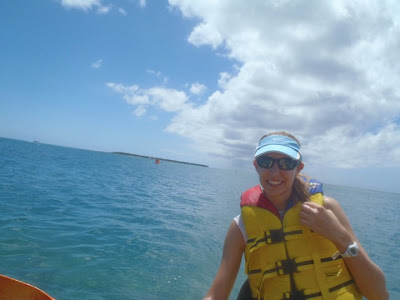 So we had a lovely 35-minute trek from the southern tip of Guam to Cocos Island. I have written about Cocos Island before when Nick and I took Propeller there, but we didn't go on the actual island because the reefs surrounding it are so shallow. Our boat motor would surely have suffered some major damage. So that's why the kayaks are so awesome. They can glide over the shallowest of reefs. It was a lovely trip out surrounded by "vacation blue" water, with the wind and the current at our backs (foreshadowing of the hard work to come). 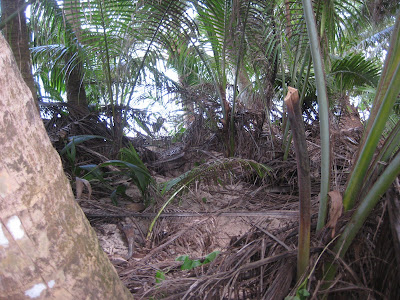 Once on land, our guides led us on a hike to the ocean side of the island. The best part of having guides who grew up on Guam is that they point out things the rest of us would completely miss, like the turtle nests in the picture here. They are hard to see but there are actually four areas that look like sandy bowls where turtles laid eggs in at one point. Cocos really would be the perfect place because it's so secluded with very few manmade structures or lights. There is one Japanese day resort on the island down the way a bit, but for the most part, it's all rustic nature. 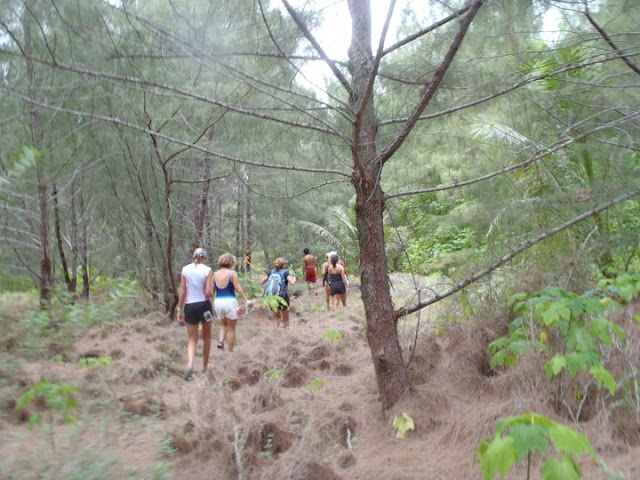 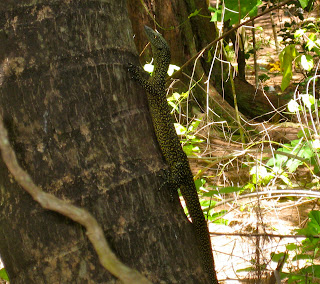 The trek across the island was pretty neat. The ground was covered in pine needles, of all things. And we saw four or five large monitor lizards that I didn't know existed out here. These things were really good at climbing trees, so I'm pretty impressed I got this clear of a picture of one. In addition, I immediately noticed the unfamiliar chirping of birds. I ran this by my guides and, sure enough, the villainous brown tree snakes that wreaked havoc on the Guam bird population did not have the same destructive impact out on Cocos, so there is still a thriving tropical bird population. I never saw these birds all hidden up in the treetops, but hearing them made me feel like I was back in Hawaii again! 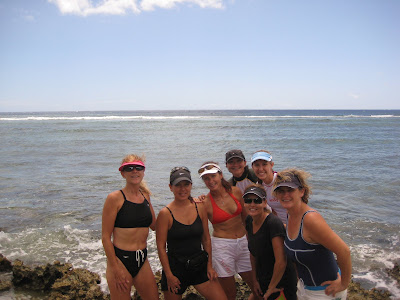 The back side of the island received a lot more surf break. You could hear the waves tumbling as we approached. The beach was mostly old coral rocks, so not anywhere to lay out and spend the day, but definitely beautiful. Our group had a great time and I enjoyed getting to know many of them better. I have been on a few hikes now with my kayak buddy Renea (white shorts, red bathing suit). She lives in my neighborhood and only has a few months left on Guam, so she's making the most of it.

After our stroll across the island, we made our way back to the kayaks and put in to start the long paddle back. We knew it would take longer going back since the current and winds were against us. So we started paddling. And we paddled. And we paddled some more. Finally, 55 minutes later, we arrived back at the boat ramp in Merizo: 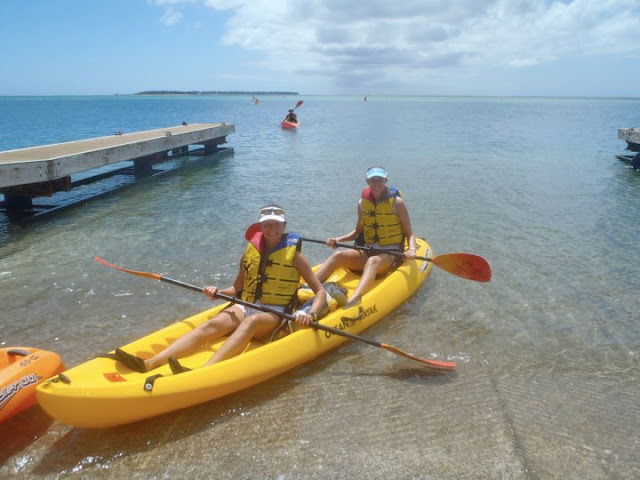 And we were still smiling (of course we were, since we were the first group back... winners!! j/k... not a race...). No, seriously, it was an awesome day and I can't wait to take Nick on the 5-mile kayak trip at some point. Especially because we will have a double kayak. And he will do most of the paddling (kidding, honey... although we both know it's kind of true... lucky me!).
Posted by Peyton Roberts at 6:18 PM

Email ThisBlogThis!Share to TwitterShare to FacebookShare to Pinterest
Labels: Exploring