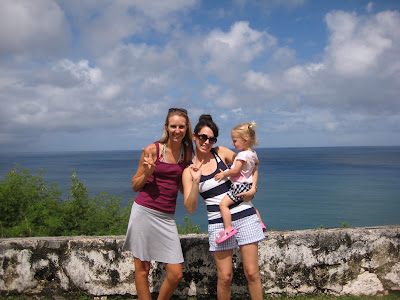 Mary and Annika are our third round of visitors here on Guam. We thought they were coming in this Friday, but due to the tsunami, they decided an expedited Guam vacation sounded a little more fun than being holed up inside their third-floor flat avoiding radiation level changes, rolling power outages, and food and fuel rationing back in Japan. So they escaped the mess and came to Guam where they are only a three-hour flight back to their home in case this thing blows over and they can be with Da-Da again. 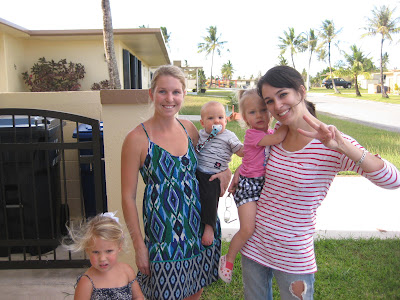 I picked up the girls and headed to Ashley's house, where Mary and Annika got to meet Wyatt for the first time. Ashley moved to Guam about a week before Mary moved to Japan last January and these girls hadn't seen each other since. It was a fun reunion, especially with how much the little ones have grown in this first year abroad. Our first Guam outing together was a new one for me... the park! 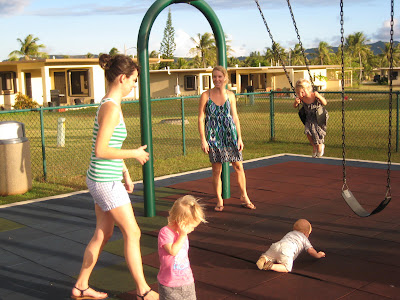 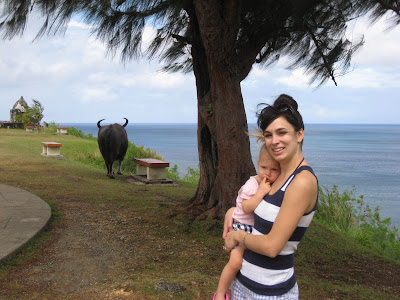 After taking a day to get settled here, Ashley (and crew) and I took Mary and Annika on the must-do drive around the southern tip of Guam. I was amazed that we saw four carabou on the drive, including Beshy, who I first met at Spanish Fort when Jenny was here in November. Annika was not such a fan of the big "cow" so she and Mary kept their distance. 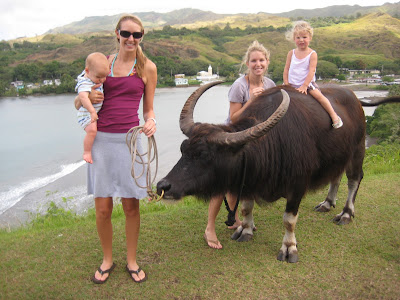 Bryce, on the other hand, couldn't get enough of the "water bussalo!" She let Beshy take her around for about 10 minutes before we let the Japanese tourists have a chance. Brave little girl!  We also got to try some of the locally grown honey bananas and star fruit. Yummmm! 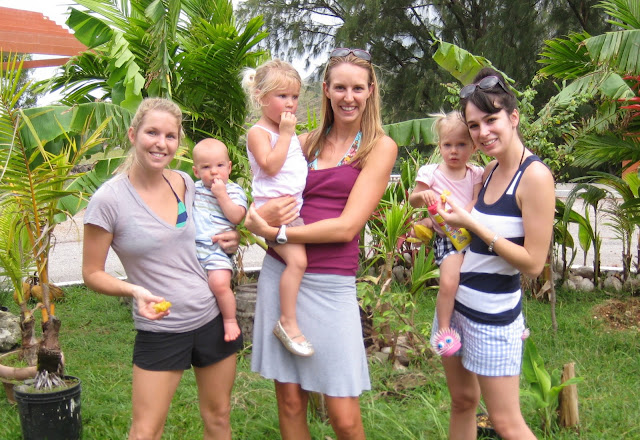 Never done so much baby holding in my life as I have this week! 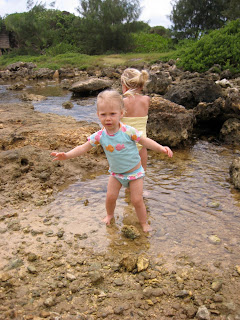 After numerous stops so we could look out the window at more water bussalo, chickens, goats, puppies, etc., we made our way around to the Inarajan Pools. These are such a perfect place for the kiddos to play because the water is divided into different pools of varying depths, some of which are quite shallow. The girls had a fun time splashing around and looking for crabs and fish. Here's Annika getting her sea legs.

We had a great time showing Mary how beautiful Guam is, and we even made it home in time for naptime! This has definitely been a new thing for me this week, planning around a little person's schedule. I'm growing to appreciate this whole idea of having your day built around a nap! I mean, whole countries have figured out this philosophy. It's pretty genius. 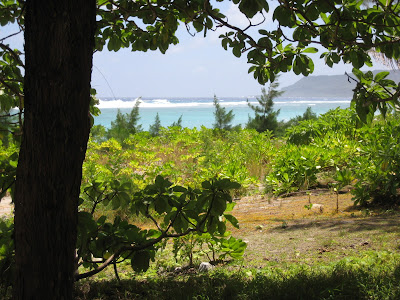 Other than a few schedule differences, Mary and Annika have meshed right into our week. They joined us at church on Sunday, have gone grocery shopping with me, and Mary joined in my Bible study on Tuesday. Always fun to have friends tag along, for sure. But even more awesome is that there are certain things I tend to do only while visitors are here. For example, we went up to the Air Force base and I took Mary and Annika to Tarague Beach (right), one of the most beautiful beaches on Guam. 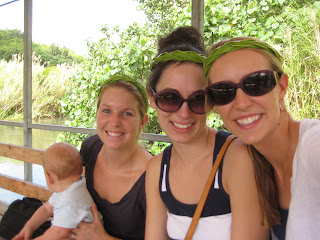 In addition to hitting up some of my favorite places, visitors are always the perfect excuse to get out and try new things. This morning we went on a river boat cruise of the Talofofo River.  This was something I'd wanted to do for a while but always seemed to run out of time to do with previous visitors. I know they would have enjoyed it had we gone, but I have to say it was the perfect thing to do with kids! Cruising the river up into the jungle was quite beautiful, and there were plenty of stops along the way to feed giant catfish, harass coconut crabs, stare at more water buffalo, and play with crafts made out of palm leaves. 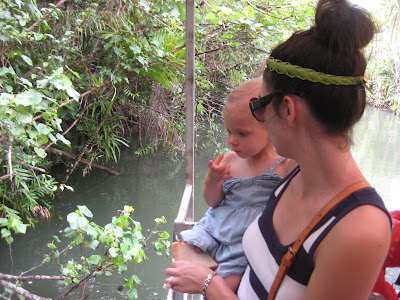 Here we have Annika eating the bread she should be throwing to the fish. Mary must be so proud. Kind of ironic that the name of the boat is the Proud Mary :) 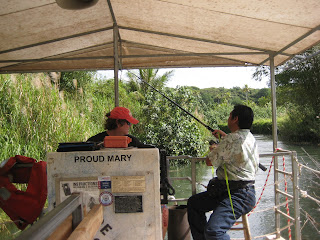 Speaking of the boat, we were somewhat impressed that the boat captain had been driving this boat up and down this river two tours a day for TWENTY-TWO years. I guess once this becomes your office, no reason to try anything else. Especially when you can fish for your dinner while you are working.  Oh yes, both of the guides had poles in the water throughout our excursion, hoping to catch something tasty to eat that night. At one point the captain said, "Hey, if you don't catch anything it's pretty much just a waste of gas." Just a reminder that despite this well organized and well presented tour, we were definitely still in Guam :)
They did catch a fish at one point, which Annika mustered up some bravery in order to touch: 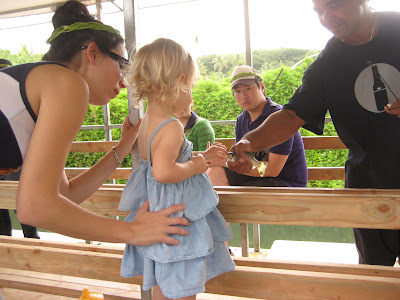 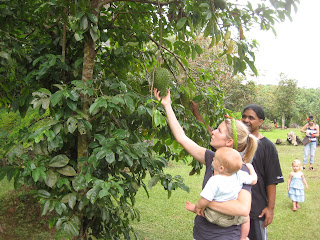 After about an hour of cruising two rivers (I had no idea the rivers were long enough to cruise on for that long!), we disembarked to a visitor center that used to be the site of an ancient Chamorro village. Here we got to touch, smell, and learn about many different trees and plants that grow in the wild here. The fruit Ashley is holding is something I'd never seen or heard of before, but apparently this fruit would be sweet and ripe in about a week. We found ginger, hibiscus, and many other types of trees that were utilized by the indigenous people to build homes and cook food. We also saw some original Guam latte stones (below) that have been at this site since about 200 BC. Latte stones were used to hold up royalty houses back in the day. They are somewhat of a Guam local symbol now so you'll see replicas all over the island. Here's a great group shot from the day! 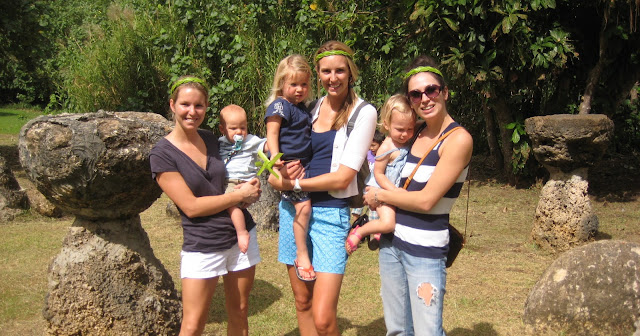 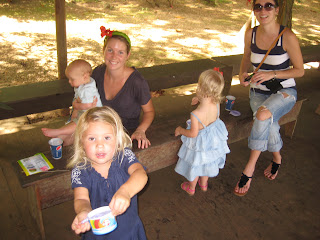 After the stroll through the old village, we enjoyed taro ice cream and lemon iced tea before watching a quick demonstration of how the Chamorros would start a fire using hibiscus bark. I think the kids were way more into the ice cream than they were into the fire starting, but it was pretty amazing how quickly they started a fire from nothing. After the boat tour, we went out to lunch on the beach at Jeff's Pirate Cove. All in all a fun day! I am taking advantage of nap time to put this post up. Now, as my eyelids are drooping, I might go take advantage of nap time for real!
Posted by Peyton Roberts at 1:55 PM