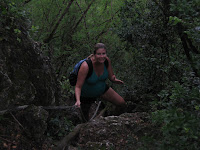 Okay, now before anyone gets too excited, I must explain. My friend Kate and I hiked down a cliff (on a trail) to Spanish Steps to go snorkeling. This is one of Guam's best snorkeling spots and Kate only has a few weeks left on this island before moving to the boring and cold East Coast to have her baby. So I was happy to have any excuse to head to this beautiful spot.  We were there for about 45 minutes poking around, not too impressed by the day's showing of fish.  We went at high tide (purposely so Kate's belly didn't drag on the rocks - cute!) and the currents were crazy. We literally had to hold onto rocks to keep from getting sucked away at times (though this sounds much more dramatic than it actually was). The water clarity wasn't as amazing as it usually is and the sun hid behind a cloud taking away the illumination source. All in all, it was shaping up to be a ho hum day... until we turned a corner into a lagoon and all of a sudden a bunch of fish started swimming very quickly towards us. Weird, I thought. The fish always swim away. I wonder if... 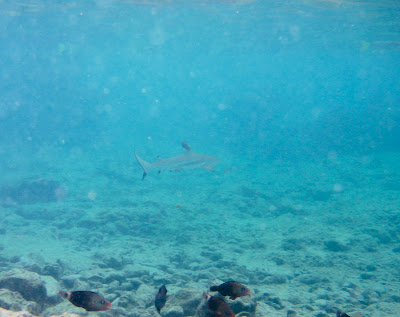 Sure enough - shark! Sharkssss actually! As soon as Kate and I realized we were swimming in a lagoon with a bunch of sharks, we did what any normal Guam snorkelers would do... we swam towards them as fast as we could to get a better look---and hopefully some pictures. So yes... we were the ones who, in essence, attacked the poor sharks, paparazzi style. There were 4 or 6 of them, 18 inches to about 2.5 feet long. We followed them around for about 15 minutes, trapping them in the lagoon whenever possible to get a better look. Taking pictures was tough because they are so fast! Here's a video to give you a bit of an idea:
Up to this point, I had yet to see a single shark since being on Guam, so it made for an awesome day to see so many of them so close up so unexpectedly! And I have to say I'm pretty impressed with Kate. Even 7-months preggers, she was at least as I excited as I was to be swimming with these vicious killers (again, way more dramatic than it really was).

I am thrilled to hear that just last week Guam passed a law that the practice of shark finning is now illegal. I just learned this, but apparently shark fin soup is a status symbol in some cultures (not sure if it's Asian or Chamorro) because of how pricey it is at restaurants... our equivalent of "I'll have the lobster and caviar," I suppose. Consequently, there is a horrible fishing practice where people would catch sharks of any age or size and cut off all their fins and throw the rest of the shark back in the water. Sharks need to swim forward to push water through their gills, and without fins, they were left to slowly suffocate to death. So now the practice is illegal, and so is killing sharks in general, which will hopefully allow sharks to have a better shot at making it to their adult reproductive age (about 7 years old). 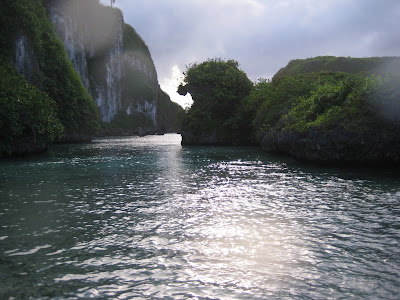 That's the marine biology lesson for the day.  Thanks to Kate for getting me to this gorgeous place for our awesome predator sightings and our very own shark week!

Email ThisBlogThis!Share to TwitterShare to FacebookShare to Pinterest
Labels: friends