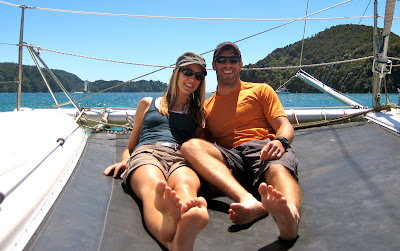 Greetings from the other side of Honeymoon #5! I hope everyone had a wonderful Thanksgiving. I am so excited to finally share with you the stories and pictures of New Zealand, which was an absolutely fabulous vacation for so many reasons. For starters, we had the pleasure of meeting up with family who live so far away. We got to try delicious new food and wine and were reunited with delicacies already forgotten about in our four months on Guam (like fresh produce). We drove through beautiful farmlands, hillside villages, surf towns, mountains, forests, deserts, and sea cliffs. We explored the innards of caves, the heights of volcanic landscapes, the serenity of the coastline, and the familiarity of the blue sea. We sailed, golfed, walked, ate, drank, slept, drove, flew, floated, and tramped (that's Kiwi for "hiked") our way through some fo the most vibrant green, blue, and even red landscapes my eyes have ever seen. 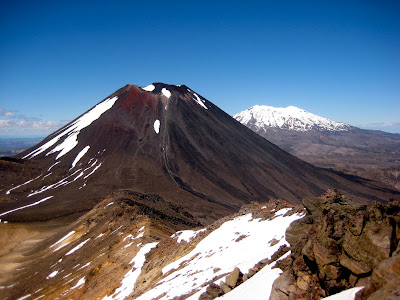 Looking back, it's hard to choose a favorite day. Nick's was on our 22.2 km (14-mile) traverse of the Tangariro Alpine Crossing in Tangariro National Park smack in the middle of the North Island.  We began the hike by climbing up and up next to a massive active volcano (that last errupted in 1995) until we flattened out and walked across a lava field flanked by snow drifts. Climbing to the summit gave us views of nearly all of the North Island and its beautiful countryside. 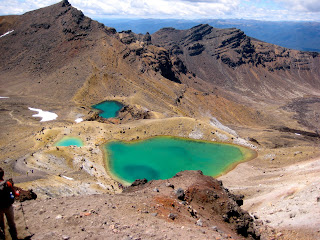 The volcanic crater was hot red while the crater lakes contrasted the gray ashy rock with an icy green.


Our hike down brought vistas of blue Lake Taupo amid fields of bright yellow flowers and green crops. 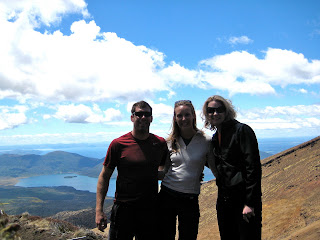 Our last steps of the perfectly sunny journey were through the cool shade of a thick forest. The diversity of views on the hike much mimmicked those of our drive across New Zealand. Packed into one day, this hike was truly memorable, especially sharing the experience with my favorite husband and my favorite sister! 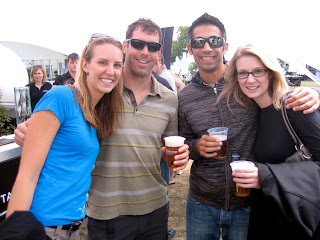 It's hard to compare a day like that with the others that stand out so much in their own way. There was our first day together with Courtney and Ben when Ben's mom treated us all to the Auckland food and wine festival. Sampling gourmet cheeses, local wines, and regional beer favorites, we soon realized what a perfect first day this was--a chance to taste everything and discover some quick NZ favorites without having to do all the driving from one farm or winery to the next. While most people in New Zealand bemoan Auckland for having nothing worthwhile to do, we had a fabulous start to our trip there. The "City of Sails" came through with a crisp, sunny day for strolling the inner harbor surrounded by impressive yachts below the pinnacle Auckland Sky Tower. 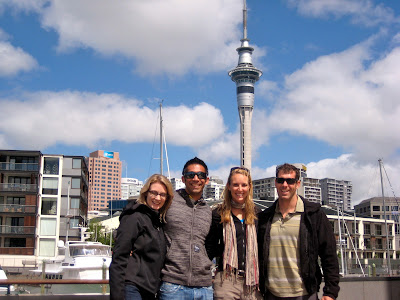 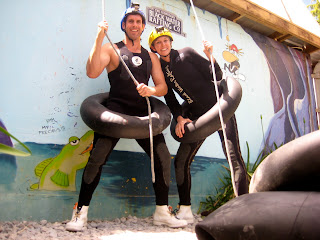 Then there were side trips, like our tour of the Waitomo Glowworm Caves, where we floated and waded through freezing cave water surrounded by rocks and bioluminscent fly larvae (more romantically referred to as glowworms). There aren't many places in the world where you can have an experience like this. All in all, pretty awesome, especially when factoring in Nick's Village People rendition of the wetsuits they provided. 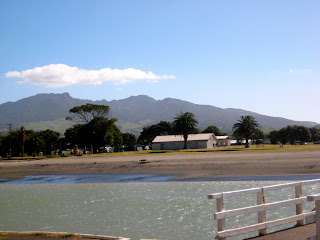 It was a day made especially lovely by our side trip to surf town Raglan on our way home. It was too windy for surfing, but the bay coastlines surrounding the cute town made a perfect setting for a run and an outdoor workout (someone has to keep his workout schedule). It was so refreshing to exercise outside without drowning in sweat as one might do in, say, Guam. The views were breathtaking and the Raglan Bakery unexpectedly provided one of our favorite meals for the week. 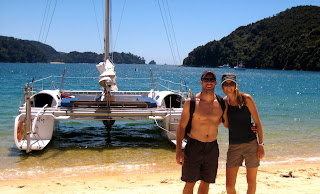 In terms of New Zealand experiences, my favorite day was spent sailing and hiking at Abel Tasman National Park. We boarded the catamaran in non-existent winds on a perfectly sunny Saturday. After 30 minutes of motoring, I heard that all too familiar sound of a sail on its freedom ride up to the top of the mast. And as the lull of the motor silenced and the fresh Tasman breeze took over, I couldn't help but feel right at home, even in the waters of a new place in a hemisphere I've never crossed into before. 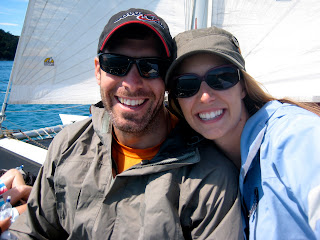 It was a relatively short two-hour sail, but alongside the pulses of the bay, I was caught in a wave of emotions ranging from the sadness of having left behind our own sailboat in San Diego to the ecstacy of being back on the water, fueled by the winds of a breathtaking sea, coasting carefree through the sunshine. I've never felt so at home while so far away from home. 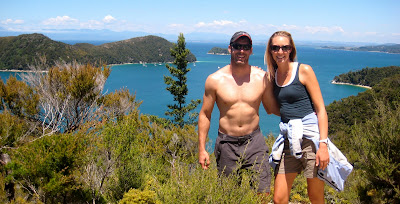 The rest of the day involved a 12km hike back down the coast we had sailed up. The bay and island vistas were even more spectacular from the heights of the coast track hillsides, and our walk was interrupted by quirky bird sounds and photo stops to capture the beautiful flowers and giant fern palms.

I should probably end this post here, but I haven't even mentioned some of the other highlights, like playing golf on a gorgeously groomed oceanside course we had all to ourselves in the late Friday afternoon sunshine. 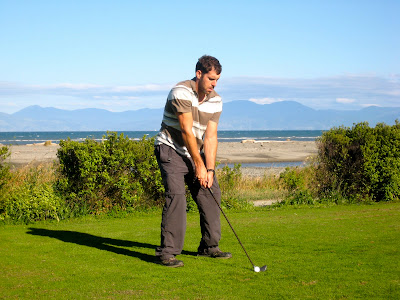 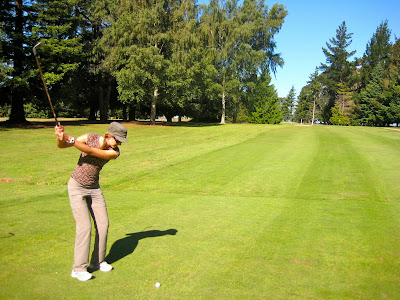 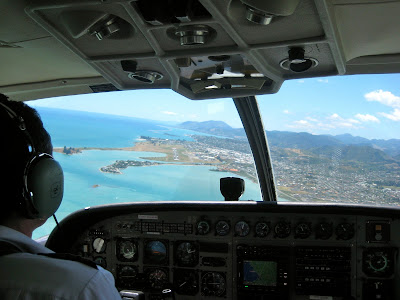 Or before golf, the hop in the Cessna we took from Wellington on the North Island to Nelson on the South Island. The views of the Marlborough Sound were extraordinary from the air, and the water color once we got to Nelson was that old familiar "vacation blue."


Or before that, relaxing and catching up with Courtney while soaking in the hot springs overlooking steamy blue Lake Rotarua (while Nick worked out at a nearby gym). 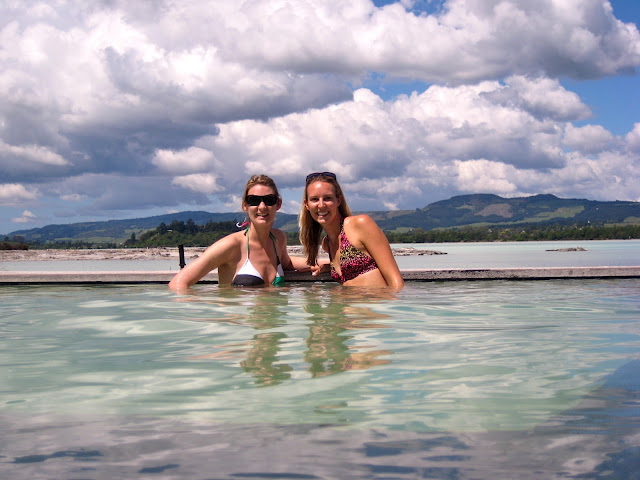 Then there's the picnic Nick and I did on the beach at Rabbit Island our last day there, right before we stopped off at a winery (which seemed more numerous in these hills than Starbucks is in Seattle). There really were so many highlights from this relatively short trip. New Zealand is a truly amazing place in every possible way.

After a one-night stopover in Fiji on our way back to Guam, our fifth honeymoon came to an end (Fiji is way too much like Guam to bother blogging about). New Zealand was so good to us throughout our stay, providing abundant sunshine to illuminate its colors while offering fair winds and cool nights reminiscent of San Diego. At the end of it all we reflected on a trip where the travel was easy and the food was delicious. You can't ask for more than that out of a honeymoon. And even though it may be too soon, I can't help but wonder where #6 will take us. Only time will tell.
Posted by Peyton Roberts at 10:09 PM