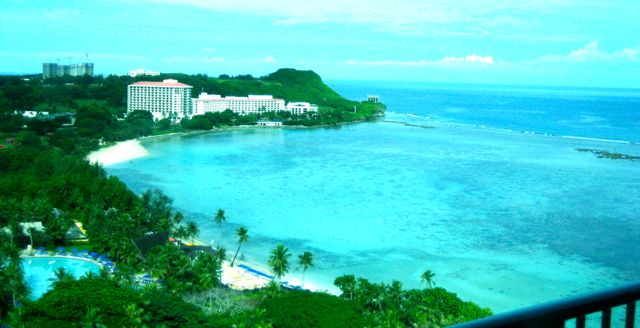 I am writing now from 30,000 feet over the Pacific Ocean… which means our time on Guam has come to its end. Monumental as this day is, I would be lying if I said I wasn’t ready to go. Five weeks of being in transition, and especially the last two in and out of hotel rooms, borrowing a car, plus the draining base check-out process makes a person want to get on with it already.  That said, the view from our 16th floor room of the Marriott in Tumon made those last five extra days on island a little more bearable. 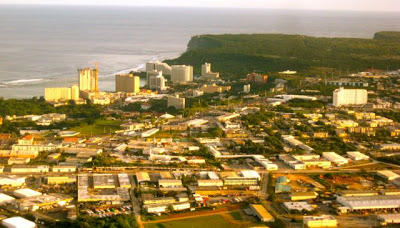 We spent our last weekend on Guam saying goodbye to the places and people that have made this island such a wonderful home and rich experience the past two years. Thursday we checked out of our empty, lifeless Happy Gilmore home and checked into the hotel. Friday we played golf at Leo Palace, the nicest golf resort on the island. 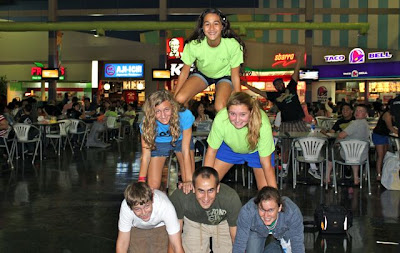 Friday night I led one final youth group get together… a photo scavenger hunt at the outlet mall. A bunch of kids and leaders and parents showed up for the fun. We had a blast collecting silly pictures of monkeys and food court pyramids and videos of manikin proposals and thumb wars with Korean tourists. We went back to the church for dessert and a viewing of all the ridiculous shots full of faces that I am going to miss so much. 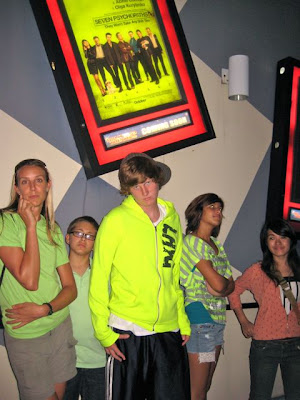 On Saturday, Nick and I did one final drive around the southern coast of Guam. It started with a stop at Talofofo Caves so Nick could show me the back entrance to the biggest cave, which I hadn’t seen before. There’s a rope where you can climb the hundred-plus feet down to the bottom (he and his brother did this back in April). But it was slippery and wet, and with so few hours left, I decided I wasn’t feeling that adventurous (you’re welcome, Moms). 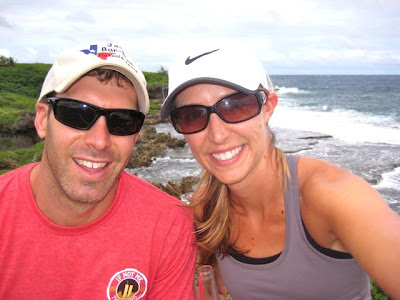 So we continued on to Inarajan Pools so I could feast my eyes on my favorite island spot one more time. The surf was powerful and the wind was strong. Rather than soak and wade and dip in the fresh pools, we kept our feet on the limestone this time. We stared out over the ocean and marveled again at its incomparable vastness. We breathed in the salty air and toasted to two unbeatable years of island living. 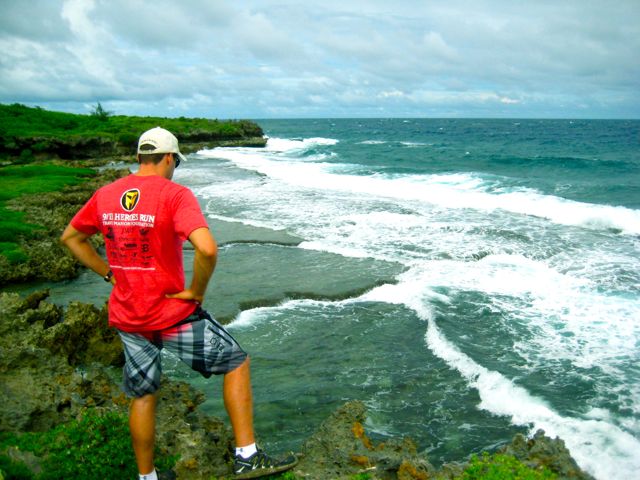 We wrapped around to the Southern Mountains overlook to peek at Mt. LamLam one last time. The 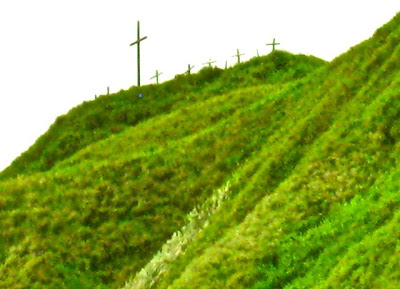 weather was pretty terrible our whole last week… not necessarily pouring, but lots of clouds and wind and very little sunshine. I had hoped for another Mt. LamLam sunset climb last week, but each opportunity was met with an evening sky marred by a blanket of cloud cover. We never made that last climb. It sounds disappointing, but honestly, getting out of here during rainy season was the probably only thing that could make it easier to leave paradise. 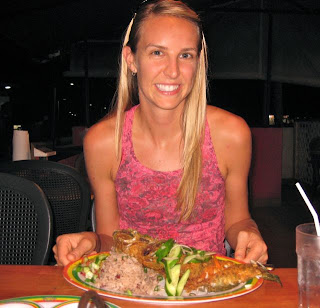 The same weekend we were staying in Tumon was also a port call for the USS George Washington, an aircraft carrier strike group that’s based out of Japan. Our friends Ben and Mason (the husbands of the girls I visited in Japan, friends from our time in Coronado) were in town, so we grabbed dinner with them at a favorite restaurant. I ordered parrot fish, a local reef fish, which is one of the tastiest there is and probably not one I’ll be able to get fresh in Virginia Beach. When in Rome… 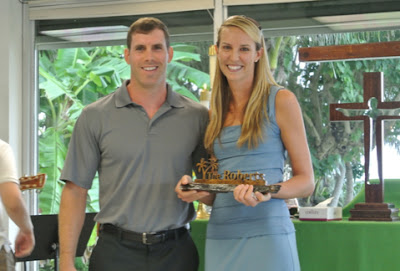 Sunday morning we awoke for what proved to be the hardest part of the weekend… going to church one last time. Since I was singing, I helped pick the songs, so the service included some of my absolute favorites. At the end of the service, Nick and I stood before the congregation during our farewell and shared what it has meant to be a part of this unique and caring church family. We received our parting gift, our last name carved into a piece of wood from a tree taken from the church property. It will sit on our mantle in our future home and remind us to continue passing on the love and fellowship we found at the Lutheran Church of Guam.
After the service, our church voted to extend a Call (yes, call with a capital C) to one of the pastors who visited a few weeks ago. As part of the Call Committee these past 12 months, I found it very satisfying on our last Sunday that after months of prayer the church was able to take this leap of faith towards its future. 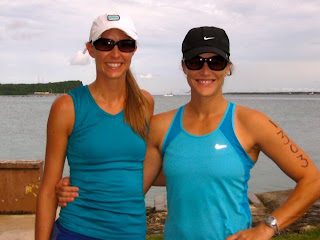 Sunday afternoon we found ourselves at our favorite barbecue spot, our friends’, the Roberts, house down the street from ours. We have spent so many Saturday nights here gathering with different groups of people for a great meal and lots of time-passing porch sitting. We joke that these guys are our long lost brother and sister (since we share the same last name and all). After the last year and a half together of dinners and workouts and venting sessions, I think it’s safe to say that we’re only half joking. 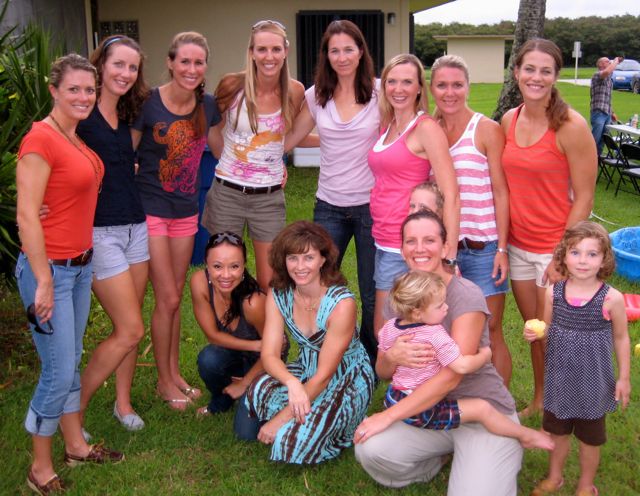 So many great friends from the neighborhood and Nick’s work came out to see us off at the party. I was completely surprised when the girls pulled me aside to fill me in on an extremely unexpected parting gift that has to be one of the most thoughtful gifts I have ever received. It is waiting for me in Texas. I will have to leave you hanging for now until I get my hands on it.

Monday we woke up to the reality of our last day. Nick spent the morning at work receiving his parting gifts and awards from the command and leading one final workout with his buddies. I ran last errands and spent an hour at Gab Gab Beach. I went swimming one more time to absorb the beauty of the reef and the energy of all the life swimming around and through it. I ran into a pod of about 50 squid which Nick and I spotted a week ago for the first time. I smiled thinking about how this place continues to amaze me even in our last days.


Monday afternoon we played a final round of golf at Leo Palace then headed back to the hotel to pick up our visiting buddy Ben for our final meal on island. We went to our favorite Thai place and weren’t disappointed. We dropped Ben off back at his ship on base and made one last final journey down Marine Corps Drive. Along the way we said goodbye to the things we are going to miss… “Goodbye 54 Gilmore. Goodbye LCG. Goodbye YogurtLand… Goodbye fish… thanks for all the memories.” We also said goodbye to the things we aren’t going to miss “Goodbye terrible Guam radio. Goodbye crappy Guam Premier Outlets. Goodbye GTA cell phone service… thanks for all the dropped calls.” 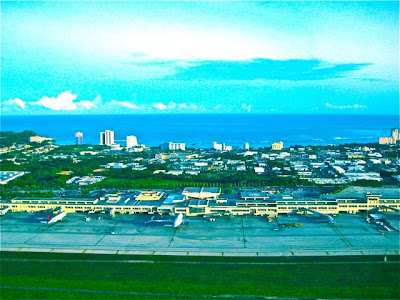 This morning, Tuesday, September 25th, we woke up, packed up, checked out, went to Guam International Airport, and boarded the plane for our one-way journey back to America. As the wheels lifted off the ground, I spent the next few minutes looking out over the land, the land that has become our home, the island that has captured my heart and stretched my soul and seasoned us with life. 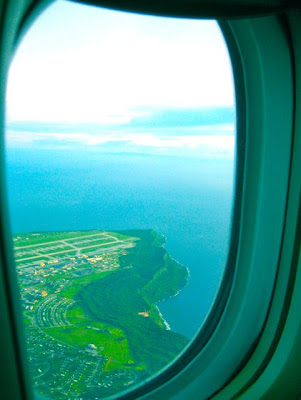 As the land disappeared from our window leaving nothing but ocean in our sights, I said my final goodbye to Guam. Island time has come to its end and our two years together in tropical paradise have transitioned into the realm of memories now.

And so a new story begins. And thankfully, as all my favorite stories do, it begins together. A new home awaits us, and even if it won’t be on a tropical island full of palm trees and endless summer, it will still manage to be the most wonderful place in all the world whenever we’re together there.
Guam, though, will forever remain a close second.

Grateful and humbled, refreshed and fulfilled. Thank you, island. I pray my feet may walk your shores again one day. But even if that day should never come, there are island-shaped footprints forever on my heart to remind me of all that has been.

So long, paradise. So long.
Posted by Peyton Roberts at 2:15 PM