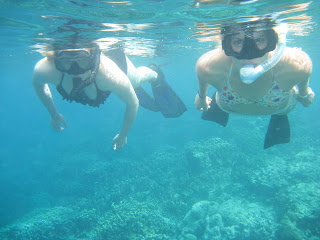 During our many going away gatherings back in June and July, Nick and I heard the ever predictible "We're going to come visit you in Guam!" line. While it's fun to think about having each and every one of our friends out here, we know reality sets in when it comes time to choose dates on the calendar, sit on a plane for 14 hours (each way), and fork over the four-figure dollar amount for a plane ticket (yike$). Well, we had our first taker this past week! Call her a dedicated friend or call her crazy, but our good friend Jenny came out all the way from Texas. It was so wonderful having a piece of home find us here in Guam! 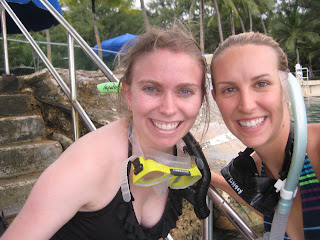 First, a little background for those who don't know Jenny. I met Jenny when I moved to Texas for my junior year of high school. She and two other friends picked me up on my first day at Stratford so my mom wouldn't have to drive me (phew!). She was a great friend to me in high school and college and was one of my bridesmaids in our wedding. She's actually known Nick since middle school, as they both had a class together in sixth grade (cute!). Jenny has earned the title of "Most Dedicated Visitor" because as of now she is the only one who has visited us in Annapolis, San Diego, and Guam. 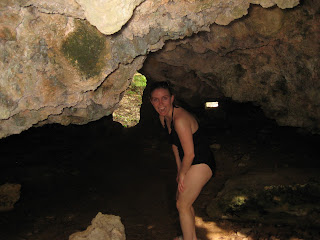 Jenny's job back in Texas has a busy season from June and October, so she wanted to do some relaxing on this trip too. We squeezed in a little of that when we weren't snorkeling, exploring caves, touring the island, or working out. So hopefully she got some of the R&R she was looking for! We spent the first day exploring three of the beautiful beaches on base, doing some snorkeling here and there. I love that Jenny is always up for doing just about anything :) 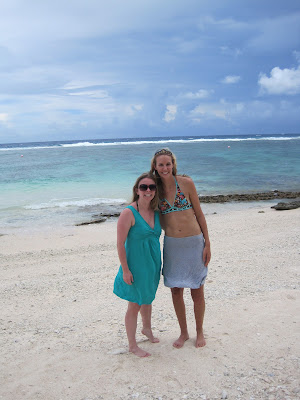 The next day I grabbed a couple of friends (Crissy & Kate from the Saipan trip), and we went up to the north side of Guam to do some shopping and beach laying. As we headed to a new beach (new for me), we found ourslves driving down the side of some huge cliffs overlooking the Pacific Ocean. Once back at sea level, we lounged on Tarague Beach for some of the afternoon and shared travel adventure stories that everyone seems to keep racking up. Tarague is a gorgeous beach, but its crazy currents and rough surf make it a tougher swimming/snorkeling destination. We kept to the beach this time, which was certainly no hardship as we had the whole beach to ourselves :) We found a great new place for lunch (hello crepes!) that my friend Caitlyn recommended and headed home for an afternoon workout and dinner with Nick. 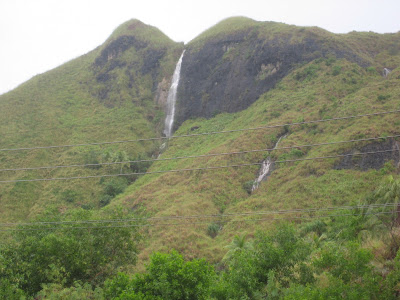 Wednesday I took Jenny on a tour around the southern half of the island. The farther south on Guam you drive, the less developed and more authentic it is. The southern end is quite mountainous as well, with gorgeous views of the hills on one side of the car and the ocean on the other. I was a little frustrated at how rainy the day looked. As soon as we started on our tour, the skies opened up and it absolutely poured. The bright side was when we looked up and saw several giant waterfalls that I'd never seen before. I guess they only make their appearance right after it rains, and we had very lucky timing.
Continuing around the coast, we stopped at the overlook for Cetti Bay. 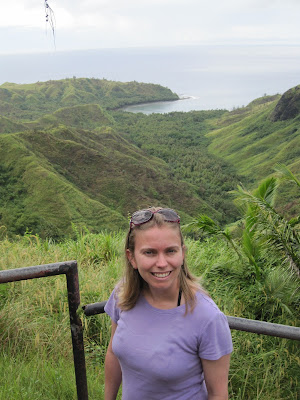 And then rounded the corner to the area of Guam called Magellan's Landing, the site of, well, yes, Ferdinand Magellan's landing spot on Guam back in the 1500s. Crazy that he was able to find this speck in the middle of the ocean way back in the day. 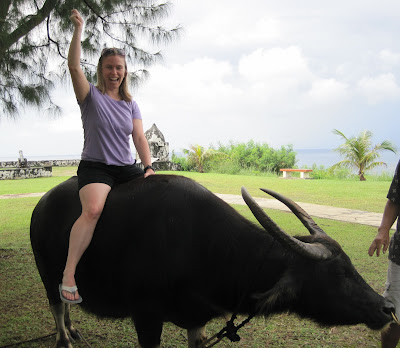 This glorious overlook called Spanish Fort is home to one of Guam's home-grown icons, the caribou. Jenny, being a true Texas girl, knew exactly how to pose upon mounting the caribou. "Yeehaw!" she said. "It reminds me of a Texas Longhorn!" The caribou's owner told us her name was Bessy... or Beshy... or Besty. I don't know because he had a strong lisp and very bad teeth. One of the best things about having visitors is that you have a reason to do all the touristy stuff you'd never otherwise do in your own town. So you betcha, I hopped on Beshy/Bessy/Betsy too. 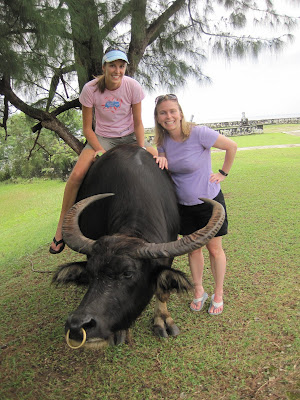 Surely some of you who were previously on the fence about coming to visit are now sold because of the caribou experience awaiting you. We had a blast, although based on the look on Beshy's face, I'm wondering if she feels the same... 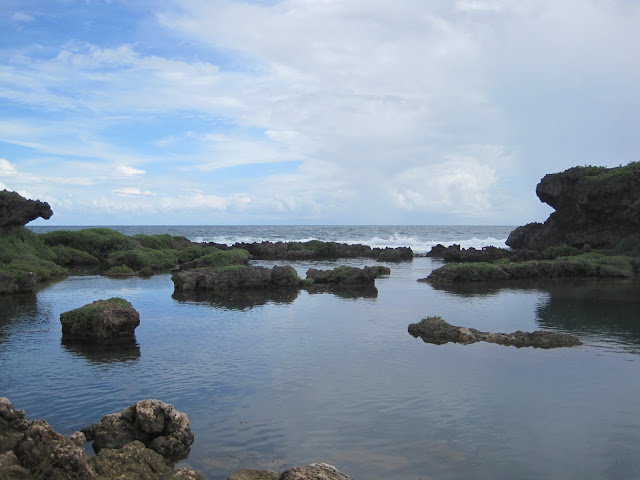 The rest of the drive around the island was one beautiful viewpoint (see above) after another. I love this drive and I always manage to find something new every time i drive it. This time, we stopped at the Inarajan Pools, a naturally pooly rocky area that you can swim in. This place is typically crawling with kiddos and beer-filled Chamorros on the weekends. It was gloriously empty and calm when we rode by. 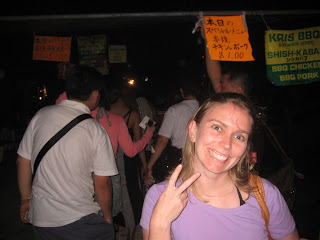 Wednesday night, Jenny and I ventured to Chamorro Village. I'd heard great things about this weekly town festival. I'd heard the shopping was good, the Japanese tourists were a-plenty, and the meat-on-a-stick was to die for. All rumors turned out to be true, and we were having a great time until our visit was cut short. With meat-on-stick in-hand, we stopped in our tracks when the lights all around started to flicker and then one by one went dark. Power outtage! Interestingly, if you ever find yourself in a power outtage surrounded by Japanese, you will probably notice as we did that they are unusually calm and orderly. After witnessing this firsthand on my trip to Tokyo, I could have expected this, but they really were calm. We all pulled out our cell phones to use as flashlights, and realizing many of the grills were being shut down, we jumped back in the "BBQ Express" line for more meat-on-a-stick (this stuff is AMAZING - dare I say BETTER than Texas BBQ?!). The Chamorros don't have it all figured out, but they have an amazing knack for grilled pork! (on a stick!) 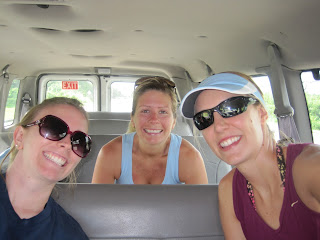 Thursday Jenny and I went Boonie Stomping. This is Chamorro slang for what we outdoorsy folks often refer to as "hiking." Kate came along and convinced our guide to take us on a harder hike than the one we were planning to do. So off to Sigua Falls we went. The start of the hike was extremely muddy. As we could have expected, it only got muddier. 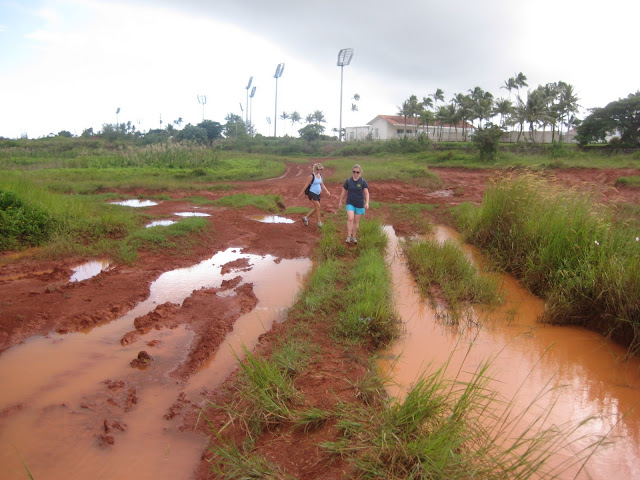 And, of course, it promptly rained on us, which made things, yes, even muddier. 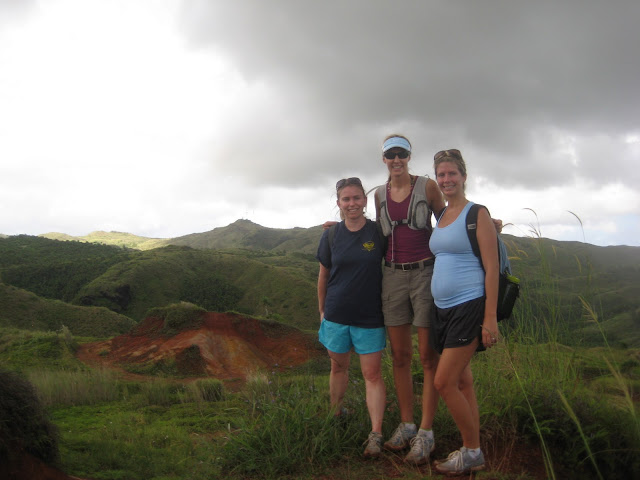 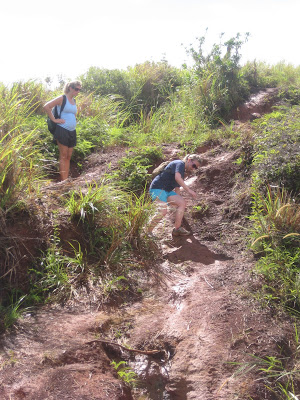 So the steep hills were a bit of a challenge, especially for prego Kate who was trying not to fall (no one, including the guide made it through the hike without at least one spill). Jenny did a great job on her first boonie stomp. The bottom part of the waterfall involved lowering yourself down slippery, muddy, mosquito-farm trenches using somewhat sketchy ropes. Due to our general disgustingness at that point, I have been banned from posting pictures of that ordeal.
﻿ 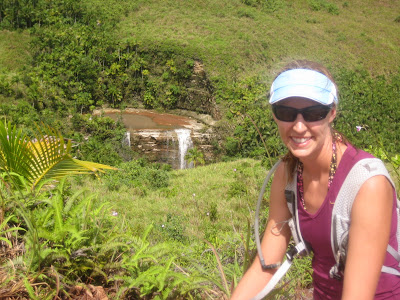 ﻿The five-mile hike was absolutely beautiful, and treking through it with friends was the best part.
And once again it looks like I have more stories and pictures than I have time, so I will leave the second half of Jenny's visit (enter Nick!) until next time. I mean, if I could make her visit last until the end of the year, I absolutely would because we definitely had a blast and we miss her already!
Posted by Peyton Roberts at 10:27 PM