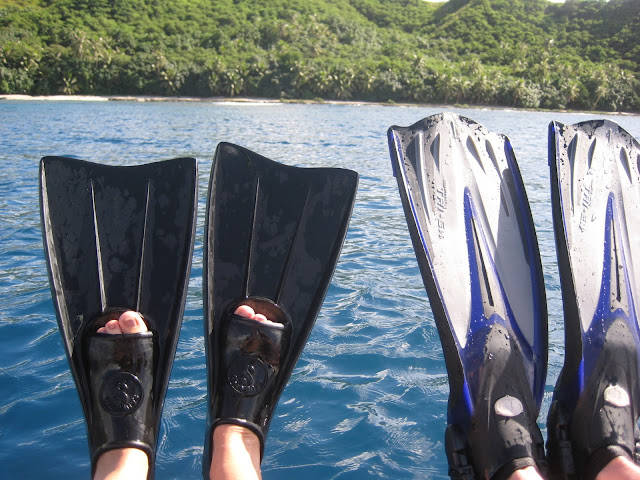 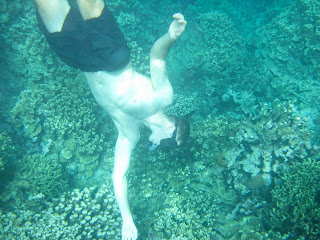 Jenny and I had a blast gallivanting across Guam all week. But meanwhile, poor Nick was stuck at work (boo!). Friday afternoon he was finally able to join us for something more exciting than dinner, with a nice easy snorkeling trip out at Gab Gab. This was one of the spots Jenny and I hit up at the start of the week, but five days later after some rogue surf had a chance to calm down, the visibility was SO much clearer. 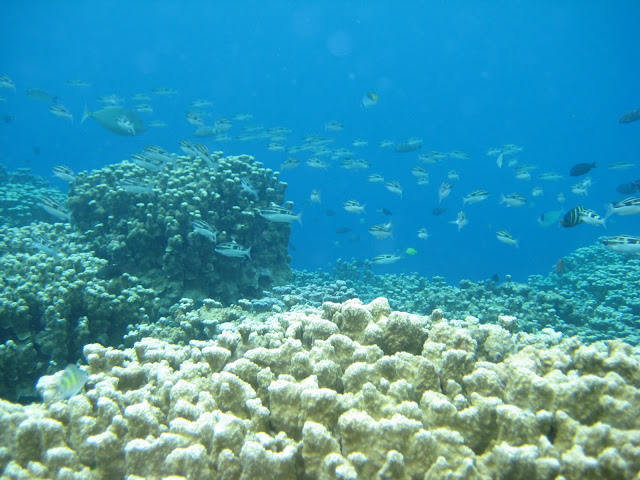 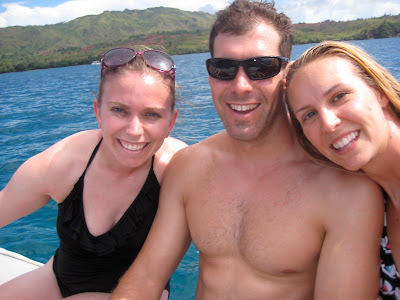 The next day we showed Jenny a perfect Guam Saturday... sleeping in, having a lazy morning, then taking the boat out in the afternoon to explore some of the harder to reach areas. We took Jenny to some of our favorite snorkeling spots. Guam did a great job showing off many of its beautiful sea creatures for our visitor. 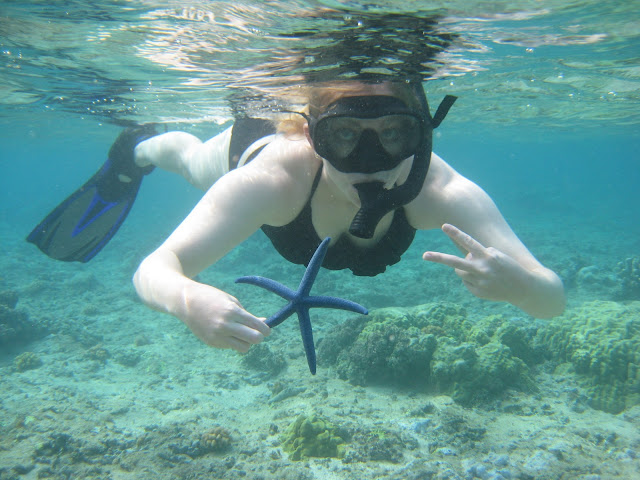 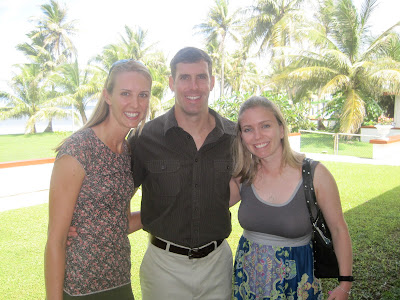 Sunday morning we went to our beautiful church and took this picture - the only one of the three of us in real clothes (not in bathing suits) all week! We look so much better without mask faces. Maybe we should have taken more like this :) 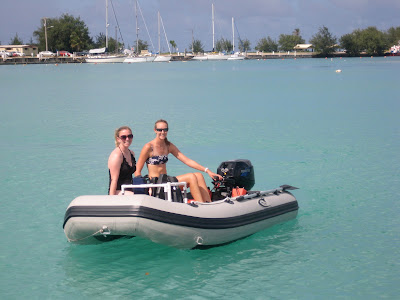 After church we jumped back in the boat, this time launched in Apra Harbor on the navy base (home of "vacation blue" water). 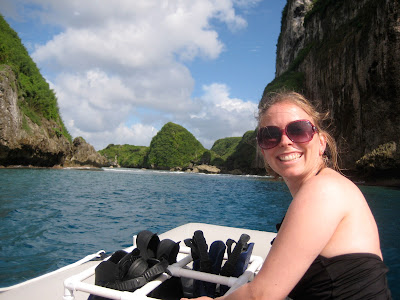 After a ten-minute boat ride across the harbor, we curved around Orote Island and approached the gorgeous Spanish Steps lagoon. And while yes, you can reach this place by hiking, it's so much more relaxing to pull in by boat. And you get to avoid the mosquito farm in the jungle on the way up. 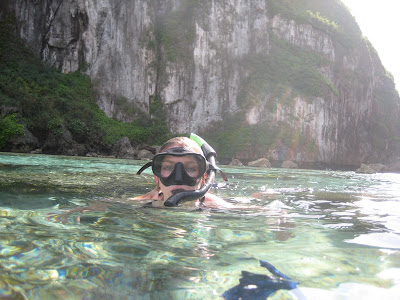 Crystal clear green water, towering mossy cliffs, and luscious reef ecosystems make this a snorkeler's paradise. Jenny's visit is a great example that you don't have to be a scuba diver to have a great under-the-sea experience here (hint, hint to anyone considering making the trip). 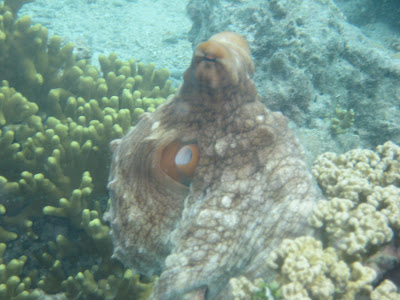 This beautiful octopus was the prize discovery of our weekend. We got to watch this guy hover for about ten minutes before it finally jetted off, changed colors before our eyes, and snuck underneath a reef rock. I've seen this phenomenon several times on the Discovery Channel and such, but nothing beats getting to see it happen in person. The instant camouflaging trick was pretty unbelievable. Hopefully one day we will catch it on video of our own. 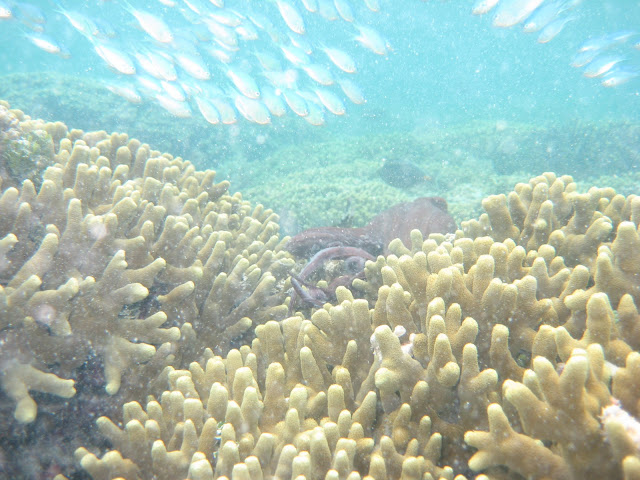 This is the one picture Nick took of the Octopus fully extended right before it turned gray and hid. I didn't notice at the time, but it's funny now to see how all the other fish are turned staring at it, just like Jenny, Nick and I were. So beautiful! 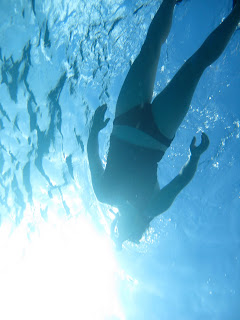 After gawking at the octopus for some time, we left the shallow reef are and swam all the way around Orote Island, which is a big rock out on the very tip of the Navy base peninsula. It's at this tip that the rolling swells from the Philippine Sea collide with the exiting waters of Apra Harbor, creating very strong currents. We were hoping to spot some sea turtles or sharks out in these deeper waters, but no luck there. The only new thing we discovered was a boatload of Japanese scuba divers, which Nick promptly free dove down to harass. 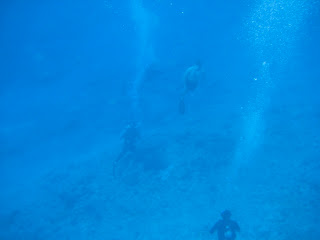 This picture is tough to make out, but Nick basically dove down next to one of the Japanese divers, pointed at some stuff, the Japanese diver looked up and had shock-face when he discovered a big white dude with no air tank giving him the "okay" sign from two feet away... down at 40 feet! So funny also to see the Japanese divers writing in Japanese on their underwater etch-a-sketch. It never occurred to me what it would be like to dive in another language. 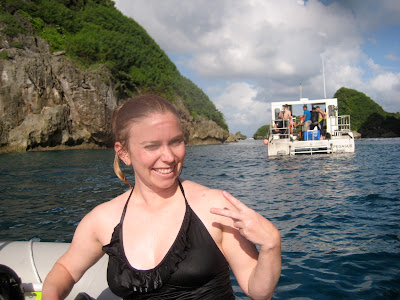 Okay so after my trip to Japan I might have made it sound like I felt bad for making fun of the Japanese tourists in Guam. I did come back with a much better understanding of their culture in their element. However, there's just something so out of place about the Japanese here in Guam. I don't know what it is, but the tour buses and boatloads full of them still crack me up, and now I know I'm not alone (thank you Jenny!).

After this awesome weekend of snorkeling and week of exploring, there's nothing I wanted more than for Jenny to get to stay longer. But alas, the week was up, and when Monday morning came, it was time to take her to the airport for the long journey back. On our way to the airport, I decided to take a few last detours to see what other beautiful island views we could fit in before Jenny headed back to the mainland. I found it fitting that in our last hour together, standing at the highest point on Guam we'd been all week, we looked down at the ocean and saw this beautiful rainbow glimmering back at us, seemingly just a stone's throw away. 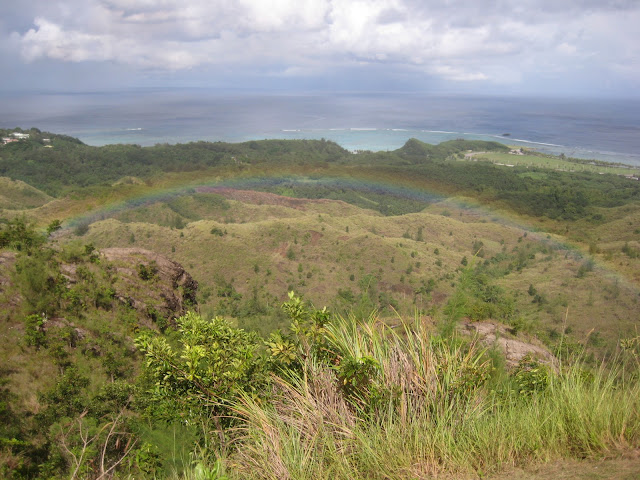 And while I was sad for my Guam buddy to leave, the rainbow was the perfect omen for our dear friend as we sent her on her way back home. Thank you, friend, for coming all this way, for bringing us a piece of home, and letting us share our beautiful island with you. I would say, "Come back soon!" but I know that's too much to ask. So, thank you for coming, Jenny, and please say howdy to the folks back home for us!
Posted by Peyton Roberts at 9:43 PM