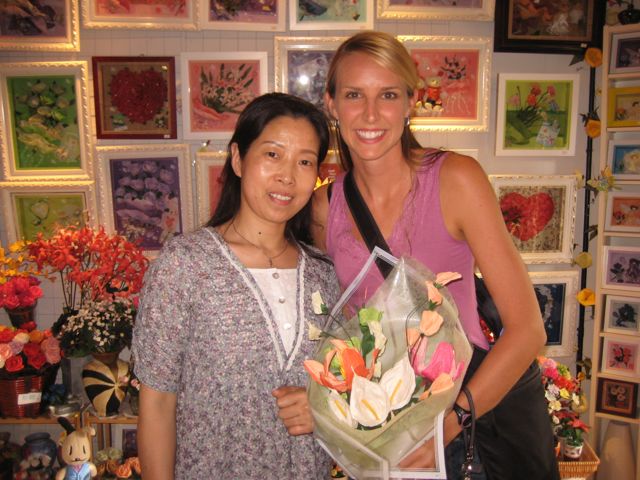 Before I move on from our excursion in China, there's one more topic I want to tackle. Since moving to Guam, I have become a lot more aware about where the products I buy come from. Part of this is because living out here, where every single item (except fresh produce and fish) has to be specifically shipped, that extra step (and fuel) often makes items more expensive than in the States. Even if it's still a price you're willing to pay, often the process of it getting here seems so ridiculous, I lose all desire for it.

A quick example is the bag of frozen shrimp from the commissary. Since growing up in Florida, I am pretty particular about where my seafood comes from. The shrimp come from the waters around Thailand, head to the USA for distribution, are distributed to commissary channels, then flown back to Guam. By the time they get to the freezers here, those shrimp have traveled more air miles than 70% of all Americans (basing that on the stat I heard that only 30% of Americans have passports). My paleo palate cringes at the thought of consuming something that has traversed the globe (twice).

Another example is all the excitement of going back to the States to shop at places we Guamanians harp on about missing, like Target, that incredible, one-stop shop where you can get all that cute stuff you need all in one place (I can't believe they have Starbucks inside them now too... that is genius... multiple addictions to feed all in one place!). But these last few times back in the States, I have left Target underwhelmed. Just about everything in there was made in China... or Bangladesh... or Thailand... or the Philippines. It seemed really stupid to fly all the way from Guam to peruse the shelves of things made just hours from my home, only to lug them back across the giant ocean. I started to wonder if anything is made in America anymore (I also still wonder why the Occupy movement didn't adopt the "Buy American" platform as one mass consumer solution to creating jobs and jump starting the economy. They had the attention of millions... sigh).

Traveling to all of these Asian countries has been a blast, but when it comes down to buying souvenirs and such, it doesn't seem to matter where you are. Thailand, Korea, Singapore, etc. So many of the things to buy there are made in China. It takes a lot of the fun out of finding some authentic gift for a friend back in America when everything was actually made in China, just like all the products at Target, right down the street from where your friend lives. 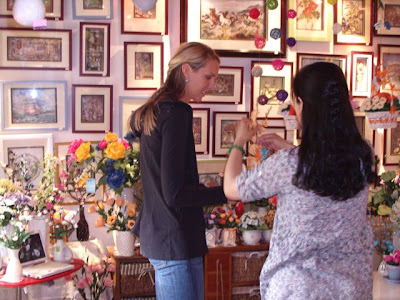 So actually being in China looking for souvenirs was great! No guilt about buying things made in China! One of my favorite discoveries of the entire trip was stumbling upon this paper flower shop in the old part of Beijing. The shop was completely empty of people except for the lady at the counter who was molding a piece of white paper into the shape of a lily. I was in awe but bought just one flower since we were at the first stop of our first day of touring. We went back to the shop on the last afternoon of our last day so I could peruse the selection and pick out an entire bouquet. 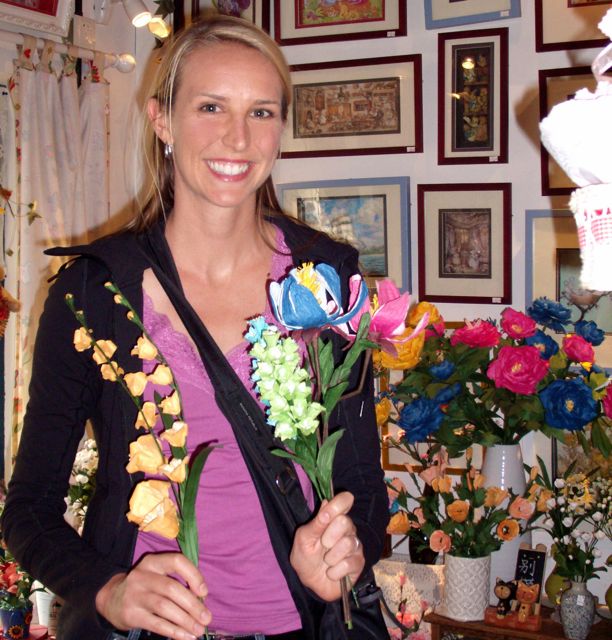 I hand-carried the fragile paper crafts back with me so they wouldn't be damaged in the long journey back. They now sit beautifully arranged in a vase on our kitchen table. I am usually opposed to fake flowers, but these flowers aren't trying to be real. They are art. 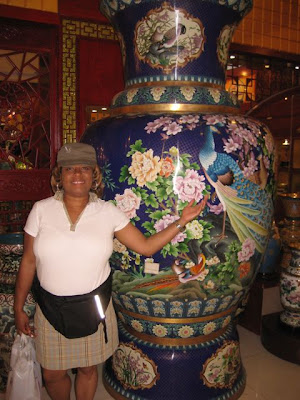 Many of the handicrafts we saw in China impressed us. We saw massive copper vases, etched by hand. We ran our fingers across beautiful silk prints and marveled at ornate coffee tables carved completely from jade. The Chinese are incredibly talented, patient, and hardworking artisans, and they have beautiful things to show for themselves. Part of me thought, no wonder Americans seek out products made here.

With all we saw in China, I know there was so much more that we did not see. We did not see any of the factories where all of those Target products are being made en masse getting ready to ship across the Pacific Ocean to our American shopping carts. My sister tipped me off to The Story of Stuff, a 20-minute YouTube video you might want to check out. Apparently all of the stuff we buy has an average shelf life of six months. American consumers (all of us) have been groomed to buy, buy, buy... and throw away, throw away, throw away. So we keep basking in the glory of new inexpensive stuff and money keeps flowing through the system. The kink in the chain for me is that after traveling to these places, it's harder to ignore the fact that very little of that money is making it into the hands of the hardworking people who actually make these products. Americans gasp about human rights but still insist (through the purchases we make) on having mass quantities of cheap products made overseas.

Since being more mindful of where my products come from, I have started to follow the Buy American movement. Turns out there are still a number of companies nestled in the hills of Tennessee and the riverbanks of Maine (New Balance!) that actually manufacture goods on American soul. They hire American workers, paying them American wages, and are subject to American labor laws and regulations. Many of these companies (like Bullet Blues jeans) go to the trouble to make sure every part of their product was also made in the USA. I haven't made any drastic consumer changes yet (if anything, I've stopped buying unnecessary stuff for the time being), but I am definitely starting to see the connection between buying American and lowering the unemployment rate.

There is a movie coming out soon called Made in the USA: A 30-Day Journey in which American filmmaker Josh Miller travels around the States using only things made in America and interviewing companies about what it takes to stay in business in America. Josh just finished his 30 days filming throughout the month of May, and his slogan really caught my attention, especially around Memorial Day: 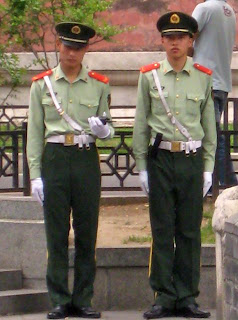 As China continues to grow in economic power, it naturally becomes more of a military threat to the USA, if for no other reason than we've turned it into that. While I have been resigned to think I don't have any control over these big changes in the world power shift, I'm starting to think that's not true. Every dollar I spend on American products and every dollar I don't on products made in China... that dollar is a vote for America. So maybe it isn't so much about Election Day around here as it is about what we as individual Americans will elect to spend our money on. Do we want to continue fueling the economic powerhouse across the Pacific and filling our landfills with cheap crap? Or do we want to transform our dollars into jobs for Americans, more tax revenue for schools, and a better future for our kids?

There is a growing community of bloggers, tweeters, and Facebookers who have already done a lot of legwork to consolidate listings of companies that make American products. Here are a few I recommend if you're interested to learn more about the products still made on US soil:


Buy American Challenge - Read more about the rationale for buying American and learn a simple strategy for making basic changes to your buying habits.

The Buy American Movement - a nonpartisan nonprotif organization dedicated to establishing a focused, coordinated, and effective buy American movement in the United States.


I Choose American Campaign - A listing of products made on American soil, as incorporated into a strategy for families to save our country.