In Search of Wisdom

Two years ago as I was saying my goodbyes to dear friends in San Diego, I received a particularly special parting gift. April had picked out for me the most beautiful journal I had ever seen. The cover was soft brown leather and embossed into it was the image of an owl. April's farewell note to me on the first page read, "I hope these big old eyes will watch over you and bring you wisdom."

I began writing in that journal a week before we left for Guam. I wrote about the sadness of leaving our beautiful home and wonderful friends. I wrote about the anticipation of arriving in a new place, of making a fresh start. I made my plans to fill those pages with wisdom. "Mistakes... there will be many," I wrote. But what a perfect place to make them, safe within those pages.

My second entry was written high in the sky somewhere over the Pacific Ocean on our 12-hour flight between LA and Tokyo, the longest segment of our one-way itinerary to Guam. I used that time and space to recap all the many moves I made growing up. I wrote about each precise memory of the special going away party in Houston. Loading up the Beast to start our trip from Ohio to Oklahoma. The family meeting when my parents announced my dad's job in Tulsa had been downsized and we would be moving---again.

I wrote about my hopes for Guam. I wrote about how I wanted to spend my time... reading, writing, playing the piano, sailing, diving, fishing, and spending as much time with Nick as I possibly could. I wrote down my fears, not knowing what was in store for the two whole years ahead.

Two months later, I returned to those pages on an exciting train ride across Tokyo from Narita airport to Yokahama Station. I marveled at all of the world and its people I would lay eyes on and what it all meant. It was my first trip to an Asian country, and it was so neat to capture a new place in words before I had a chance to do so in pictures.

Days later I returned to those pages again broken in a way I never had been before. The unexpected September tragedy was too much for my soul to understand. The emotions spilled out from my fingers and bled onto the pages. I wondered what wisdom the wise owl could possibly hold for me amid such unexplainable sorrow.

Throughout the past two years, I have turned to those pages so many times. At a coffee shop in Phi Phi Island in Thailand. After a particularly compelling Bible study. On a plane heading to Alaska. In a hostel in Manila after our first day at the orphanage. About to land in San Diego for the first time after moving. There are so many snippets of me and my experiences resting on those pages. So many moments of wisdom that came to their full realization in my quiet moments of reflection in the Owl Journal.

On our second day in Beijing, I returned to our tour vehicle after our walk across Tiananmen Square. Mysteriously, the second bag I had packed that day containing a few snacks and comfort items had disappeared from the car. I had not taken it out of the car, and the driver swore he left the car locked when we all went to lunch the stop before. But my bag was not there. I gave a sigh of relief knowing my passport, money, wallet, and camera were all safe in my purse. And then I realized... the Owl Journal. The Owl Journal was in the missing bag.

I knew at that point I would never see my journal again. I had no identifying information, not even my full name that someone could Google (there's no Google anyway thanks to the Great Firewall of China). Those thoughts, ruminations, epiphanies and memories are now moments lost in time and space. I imagined all those hours of thinking and writing, all those lessons of my soul, sinking into the lost crevices of a landfill outside the city gates. My words, so priceless to me, tossed aside as common waste.

Upon returning to Guam and telling the story, a few people have come up some really fascinating conspiracy theories... that the Chinese government took my bag (why did they leave everything else in the "locked" car?) and that my journal is now being translated into Chinese and my "wisdom" shared with countless people. Maybe someone would read this blog post and my journal would be returned to me one day (extra doubtful considering my blog does not exist in China). While that's a very gracious response, and perhaps a great subplot for a novel, I'm not so optimistic. I'm pretty sure it's just gone. 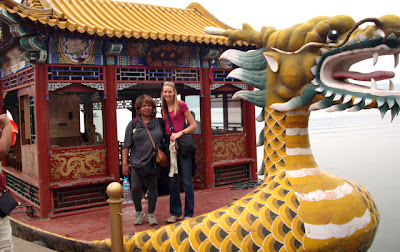 At that moment in Beijing, halfway through our tour, my default mode was to mope and pout. I was sad and angry, and I knew filing a police report or taking any action wouldn't result in getting the journal back. As we boarded the Dragon Boat at Summer Palace, I forced a smile for April's picture. We got on board with the first tour group of Americans we had seen since we'd arrived in country, many of them sistahs (as April likes to say). 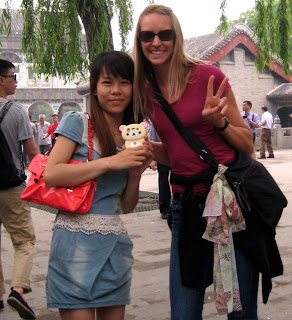 Halfway through the boat ride as I sat there moping in the mist, the group of Americans started singing Beethoven's "Ode to Joy," in perfect a capella four-part harmony. I felt like I was in a movie (Sister Act?), when the flash mob around me broke into "Joyful joyful, Lord we adore Thee," forcing me out of my troubled slump. So yes, to recap... just thirty minutes after my journal disappeared, a black American gospel choir showed up on my dragon boat in China to remind me to be joyful (believe it). When I got off the boat, a Chinese girl came over and asked if she could take a picture with me. It's like the universe invaded doing everything it possibly could to make me smile (mission accomplished).

In grieving the lost journal I have come to realize (for the second time this year) how enormously thankful I am for Peyt's Island. Most of my memories of our last two years have been safely captured here, where I can turn back to them as I wish. They don't hold my deepest, innermost thoughts as those pages did, but they are close. 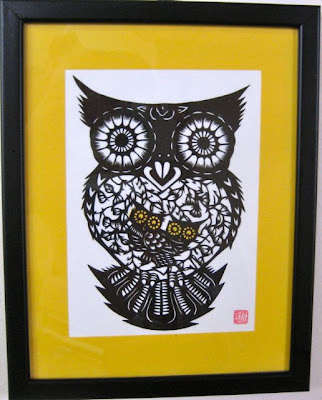 I have been reading the Chronological Bible in a year, so as we flip to June I am about halfway through. In the days after returning from Beijing without my book of wisdom, I marveled that the pages before me now happen to be Proverbs. As I read through Solomon's musings, perhaps for the first time straight through, I'm not surprised that this fresh dose of heavenly wisdom is making its way into my day with such precise timing. Its messages are simple: Work hard. Live with integrity. Choose your words carefully. Be slow to anger. Seek wisdom. It's a great reminder that even with the Owl Journal forever gone, I have all the wisdom I will ever need in this lifetime among these pages.

At an artisan shop near the Great Wall, I bought a framed paper cutting of an owl (yes, the owl is one single piece of black paper cut into by the artist's blade to create the white contrast). It looks remarkably like my owl did and now hangs on a wall in my kitchen looking over me. Its big, smiling eyes are a reminder that no one can ever steal my wisdom or my joy.

He who gets wisdom loves his own soul; he who cherishes understanding prospers. Proverbs 19:8
Posted by Peyton Roberts at 10:27 AM