A Wedding of Friends 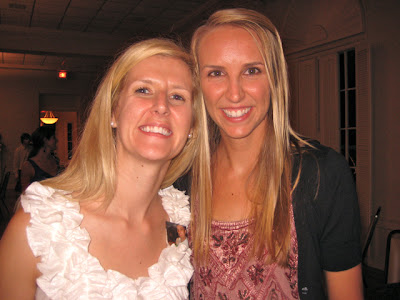 There are few things worth making the long trek from Guam to the States for. A last visit... a funeral... a wedding.... but not just any wedding. A union of two dear friends. After 25 hours of flying (thankfully with an awesome Guam/Gator travel buddy!), I arrived exhausted in some warped reality we'll call Orlando, Florida. With only an hour until the start of the Friday night welcome dinner, I took the best shower of 2011, got ready, and rallied to head out for the first of two celebratory nights. I met up with our friend Tom and his girlfriend and headed to the BBQ dinner at a local community center, which reminded me so wonderfully much of our own rehearsal dinner! It was a great night to reunite with the bride and groom and meet many of their fabulous friends I had heard so much about over the years. Not to mention catch up with sorority sisters I hadn't seen since graduation and Nick's company mates who are harder and harder to get in the same room at once. Due to holiday leave blocks, Nick unfortunately wasn't able to accompany me on this leg of the journey (but thankfully I'll see him soon). 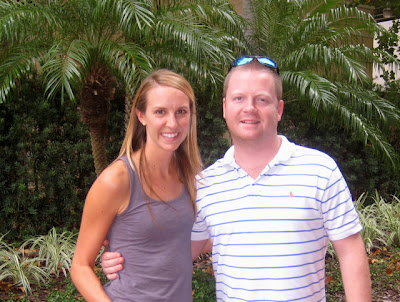 The next day I slept... and slept some more... then met up with my cousin Chris for lunch. Chris was one of my best buddies growing up in Pensacola. The two of us spent hours upon hours fishing off the dock in the back of my grandparents' house. When we weren't fishing with shrimp, we were peeling and eating it with ketchup, our favorite cocktail sauce. Chris now lives in Daytona, just 45 minutes away, so I couldn't pass up the chance to get together while I was in town. Our recent visits haven't included fishing, unfortunately, but rather family memorial services in our hometown. It was nice to be getting together as the result of a wedding rather than a funeral for once! 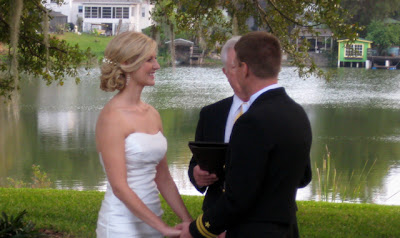 After a delish USA (fresh produce!) lunch, I got ready for the wedding, watched a little of the Army/Navy game (Go Navy!), and headed out. Down in the hotel lobby, I immediately ran into Kate and Chris's friends I'd met the night before. It was awesome already knowing who everyone was and how they knew the bride and groom. I must have explained a zillion times how I knew them. "Kate was in my sorority at UF and Chris was Nick's roommate at the Naval Academy," I'd repeat. Funny how many people responded with, "Wow, what a small world!" not realizing that we were the ones that inadvertently introduced them. Nick and I take no credit as matchmakers, as we had no intention of setting them up (though in hindsight, what a great idea!). But somehow despite time and distance, these two just made it work. 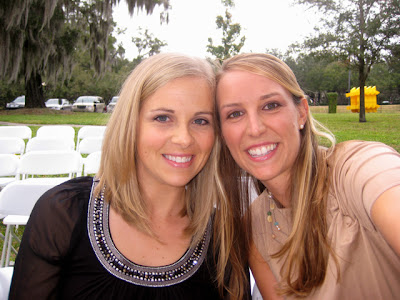 As soon as I arrived at the wedding, I ran into a dear, dear friend I haven't seen in more than two years. Megan's husband and Nick went through initial training together in San Diego, but shortly after Megan disappeared to Virginia Beach. The last time I saw her in 2009, she was 8 months pregnant! I didn't get to meet her adorable daughter this trip (she was back at Disney with grandma and grandpa!), but it was sooo great to catch up with this friend who feels so much like family. There are some parts of your life that you go through that no one else can understand except those who trudged along beside you. Together we navigated our new lives as newlyweds, pseudo-Team wives, San Diego transplants, and young professionals. And Megan is from Texas, so needless to say, we hit it off right from the start. It's faces like this (and the bride and groom!) that remind me that Virginia Beach has a place for me that will feel like home... and gives me more and more to look forward to even as I turn my back on the San Diego dream. 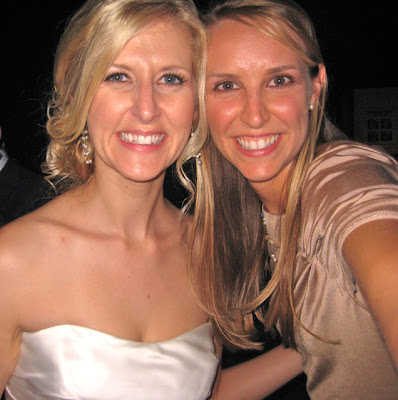 Now I certainly know that Kate and Chris hired a capable set of photographers for this very important occasion. But something in me still feels the need to document everything myself, as if my trusty point-and-shoot will somehow capture something missed by one of the professionals. So just in case the photographers forgot to load the film or something, here are the pictures I took of the wedding events. 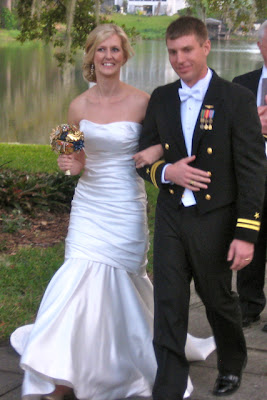 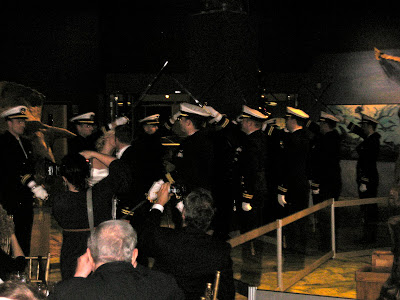 Sword arch (let's hope those photographers got the film right) 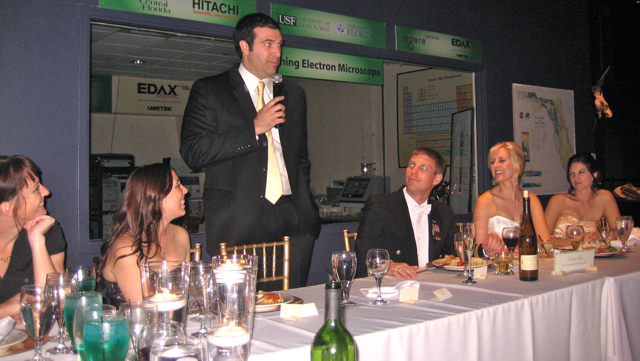 A moving and heartfelt speech by the best man, Chris's best friend from childhood
(Toasts are always my favorite part of the night... especially this night) 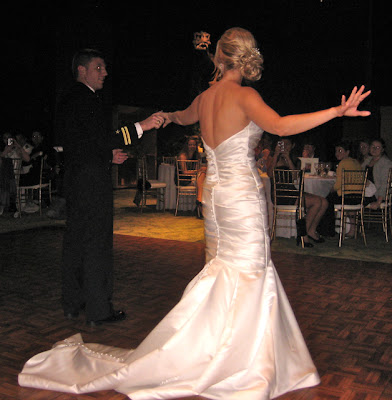 The first dance to the Eagles... Take it Easy.
Side note: Kate and Chris have actually been to Winslow, Arizona
(such a fine sight to see...) 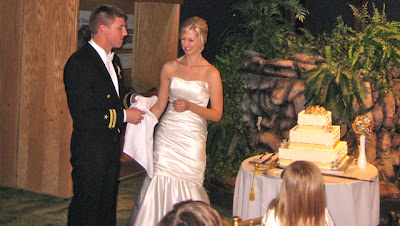 Cutting the cake (which was not paleo and therefore totally delicious) 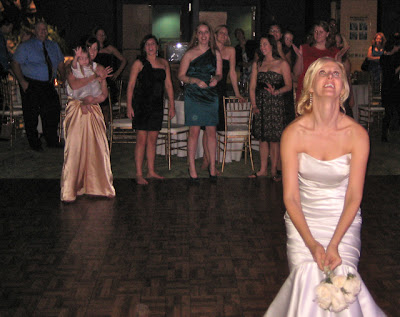 Why I love Kate... she called out her single friends individually
and made them come out for the bouquet toss. Oh yes she did... 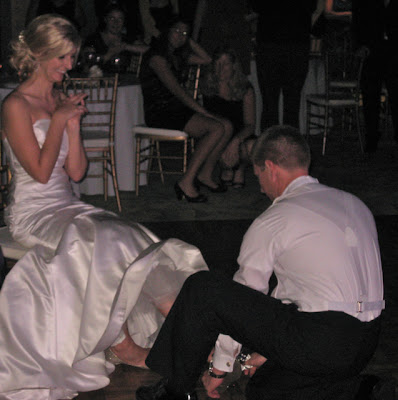 Garter toss... played to Queen's "Another one bites the dust." 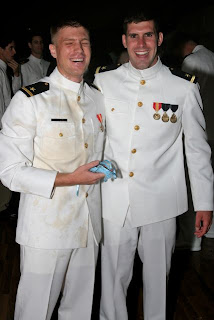 Fun fact: Chris caught the garter at our wedding (six years ago... so he was kind of next).
He also got an unexpected, unfortunate shower...

The rest of the night was all about dancing and friends! 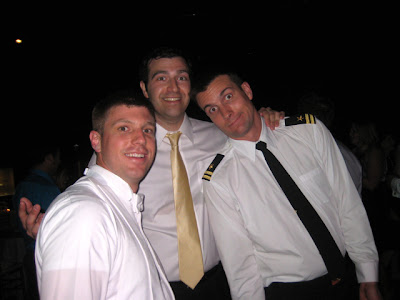 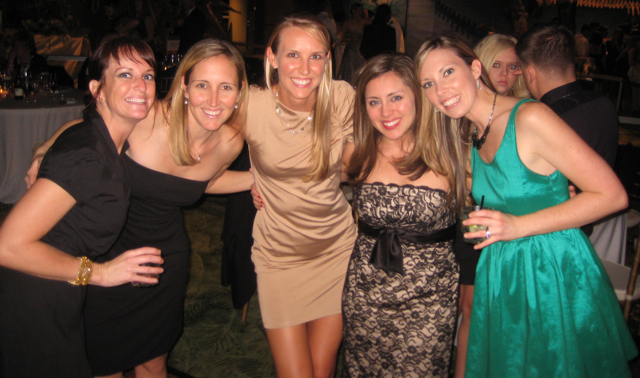 New friends! (Three of these girls live in our future hometown!) 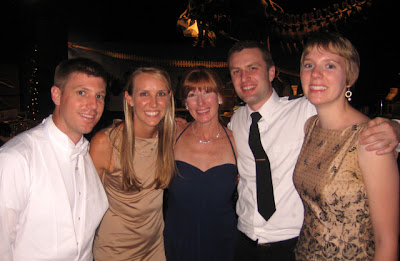 Red friends, blue friends... just kidding... although now that I think about it... 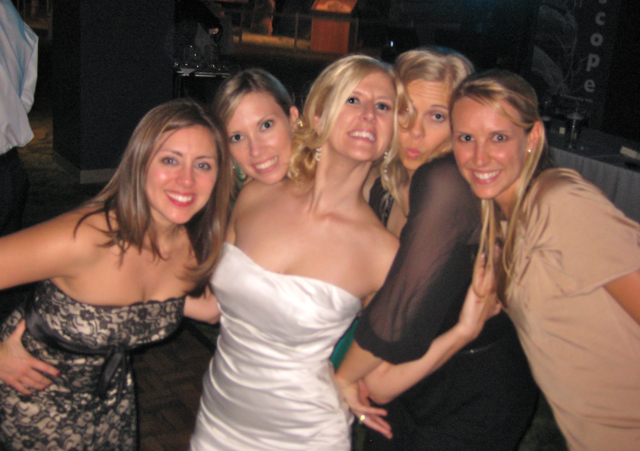 No one had any fun... especially not the bride 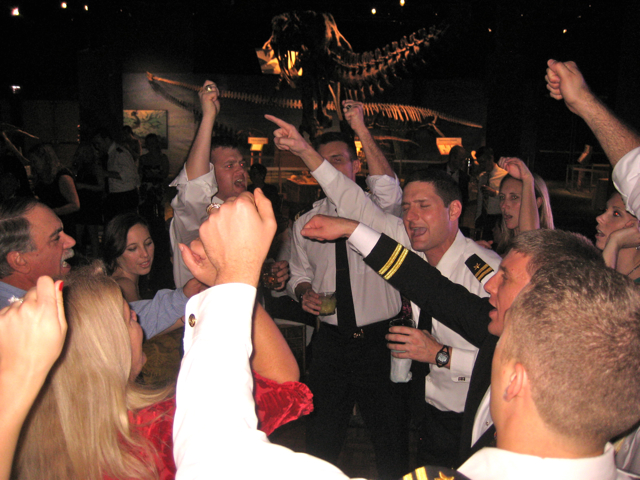 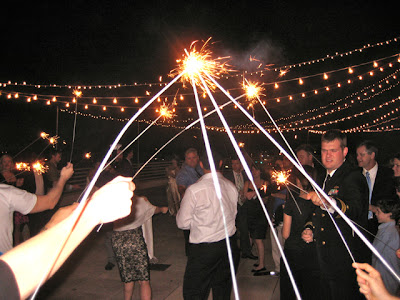 We sent the bride and the groom out with a stunning display of sparklers on the 6th story balcony of the venue. SUCH a fun weekend, SO great to see everyone and come away with some new friends too. We couldn't be happier for our two friends as they begin this new chapter of their lives together. They threw an exceptional bash to get it all started. Everything from the save-the-dates to the sparklers were so personal, creative, and memorable. 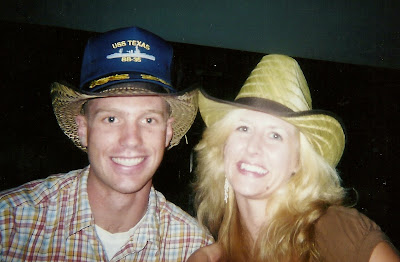 As I look back on this picture taken of Chris and Kate at our own rehearsal dinner six years ago, I can't help but marvel at how the universe conspired to get these two together. Having known them separately for so long, I now can't imagine either of them alongside anyone else. I'm grateful for our respective and overlapping friendships that have spanned the ten years since college began. In fact, their story and their wedding remind me of how integral friendship is in a relationship that goes the distance. I am so honored to be part of their story and grateful to have been present for the celebration. And, to borrow something from our own wedding (one of my favorite toasts) for the two of you (thanks to Tom and REK!): May the road go on forever and the party never end!

Congratulations Kate and Chris!
Posted by Peyton Roberts at 5:55 AM