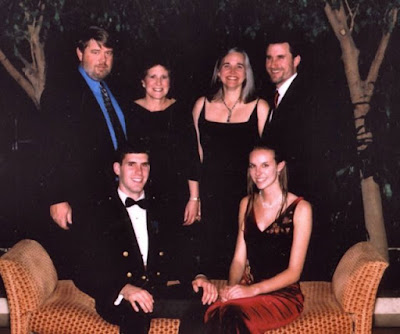 Every Christmas during our college years, Nick and I had the good fortune of reuniting in Houston to celebrate with our families and friends and be together as one year turned into the next. And every Christmas for each of those four years, I attended the Service Academy Christmas Ball with Nick's parents and good friends of ours (who have the minor misfortune of being West Point alum and Army fans). The opportunity to get dressed up and go downtown to celebrate the passing of another semester was always a highlight of the winter break, and the party itself was always smashing, even slightly over the top. Most years, every servicemember walked away with a $100 bill and some incredible prizes. They had an impressive banquet of food, poignant speakers, as well as a busy dance floor. It was one of the few perks of dating someone who didn't go to just any old university. 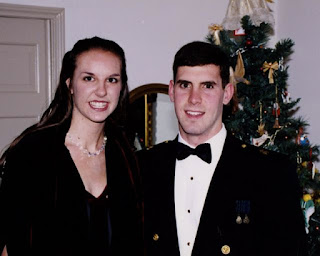 While the festivities of the evening shared a lot of similarities to, say, a wedding reception, this particular dinner/dancing celebration had its own very distinct feel. Part of it was that Midshipmen and Cadets representing the four U.S. service academies were decked out in their crisp, almost inspection-ready uniforms. Part of it was the speakers chosen, who were often notable retired servicemembers or military supporters from the area. The keynote speaker who gave the December 2001 address was particularly inspiring, as the uneasiness in the air at the time was palpable. But what stood out the most to me from any other event I'd been to was the empty chair and starkly set table in a quiet corner of the room.

The military and military veterans organizations have a quiet but appropriate way of recognizing those who cannot join the celebration that night. Specifically, through this small ceremony, they recognize the tens of thousands of U.S. prisoners of war and those missing in action whose whereabouts remain yet unknown. In their recognition, an empty chair is placed at a table seated and set for one. A white tablecloth drapes over the table and on it rests an empty plate and a glass. Wording read during a short ceremony discloses that the glass is inverted because these comrades will not be toasting with us tonight. Similar wording reveals that salt has been sprinkled on the plate, "to remind us of the countless tears of those who have never come home and of the tears of their families and friends, whose grief knows no end."I found it compelling that in a room full of cheer and celebration, there is an intentional effort to remember and honor those who cannot be present.

This Christmas I am extra aware that the opposite may be taking place. Instead of intentionally seating an empty chair as a reminder, I know of more than a few dinner tables that have an empty chair out of default. No reminder is needed because, well, everything is a reminder. I think of the many friends whose husbands are deployed right now, some missing out on their child's first Christmas. I think of a dear friend whose heart is still raw from losing her soulmate. I think back to a crash in August that dashed apart the dreams of so many families all at once. I think of a brother who wrote a song about triumph, whose notes now echo pain and loss. I think of a friend overtaken by the brutality of a war he had long since returned from. It seems epecially in the military community, you don't have to look far to find an empty chair this year.

This year Nick and I have the undeniable blessing of being able to spend Christmas with many of our closest family members... my parents and sister, his parents and brother (and his fiancee!), his grandfather, several aunts, uncles and cousins. Living so far away, we are especially mindful of how amazing it will be to share the holidays with so many loved ones. And yet, I recognize there are those among us on both sides who, due to our own family losses this year, will experience their first Christmas without a grandparent, a parent, a sibling, a child, or a spouse. One less place setting. One less glass raised. Many of them absent much too soon.

There is sadness, often overwhelming sadness, in acknowledging the empty chair at the Christmas table. But just as our eyes look down in remembrance and appreciation of the person we so wish could join us, may we somehow find the strength to look up and meet the smiling eyes of those seated around us. From sadness to joy in a glance. From emptiness to blessing in a moment. From despair to hope thanks to a miracle called love.

The thrill of hope, a weary world rejoices.

Wishing you all a very Merry Christmas, wherever you are. May you be surrounded by family and friends and in every way be reminded of the hope that was born this day.
Posted by Peyton Roberts at 6:38 PM