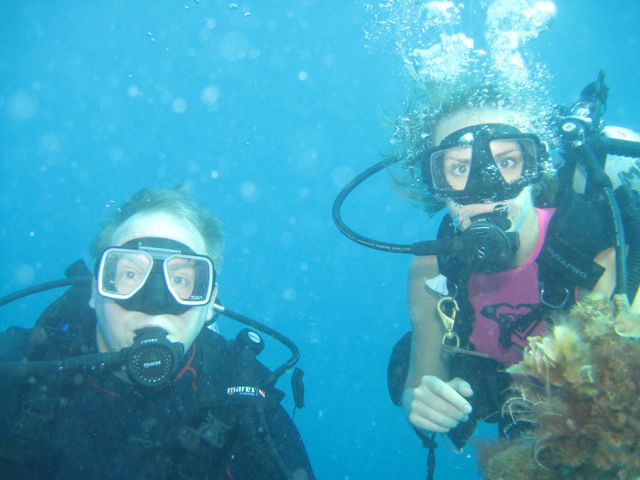 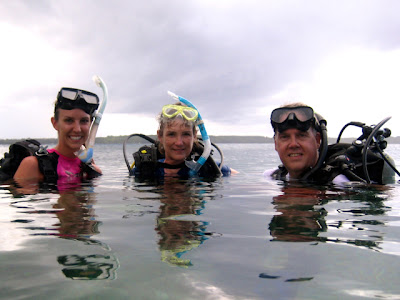 One of the awesome things about my parents coming out for a full two weeks is that they had enough time to squeeze in an entire SCUBA certification course! My dad did the required readings on the plane on the way over (a great use of his 16 hours of flying time). He breezed through the underwater tests with their awesome instructor, Fred. My mom did a great job with the course as well... I still can't believe she had never so much as snorkeled before this visit before. But she strapped on the tank and got the hang of things pretty well, even diving down under to feed the fish at 15 feet at one point. In the end, she didn't want to do all the silly underwater tasks they ask you to do (take off your mask, your BC, etc), she just wanted to swim and look at the fish! I'm pretty impressed that she made it that far, though, this from my mom who was always the one sitting by the pool growing up, never getting in. She definitely gets points for getting in! 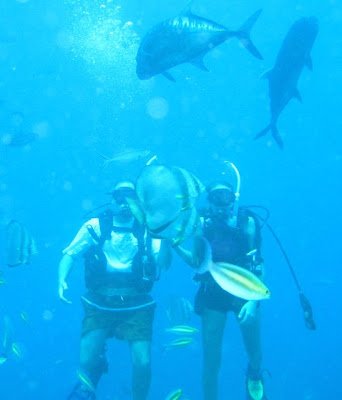 My dad was able to complete 7 dives while he was out here! Our first dives together were pretty easy, shallow dives to feed the fish. Our next dive, though, was down to 75 feet at a site called Gab Gab II. This is the place where the Japanese tourist submarine feeds the fish every day, so consequently, there are lots of fish... and big fish. We took them some pepperoni and crackers and they nipped the bag out of my hand! The rest of the dive, we explored the reef, which is just off the coast a quick swim from the main beach here on base. 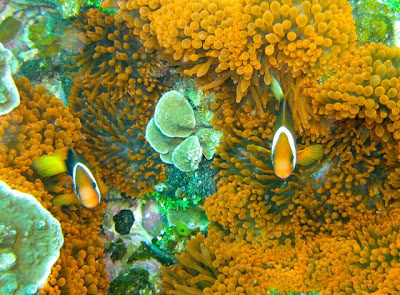 Clown fish in a red anemone 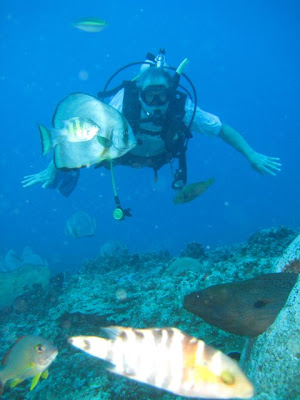 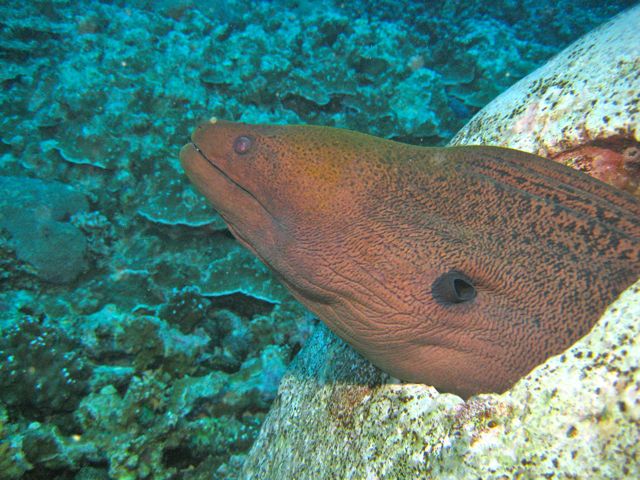 This is the biggest eel I have ever seen... its body was the width of a volleyball! 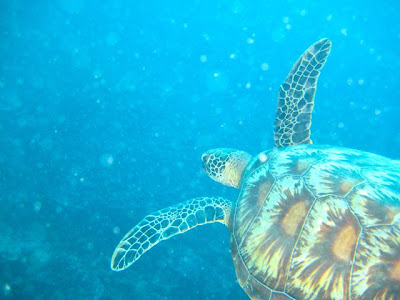 I was so hoping my parents would see a sea turtle... they did just 5 minutes into our second dive! (Mom snorkeled above us so she saw it too!) 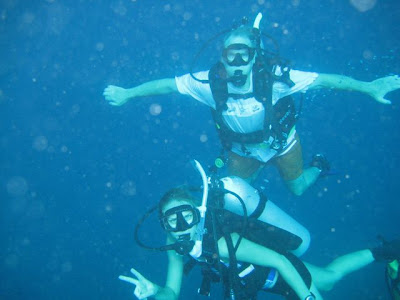 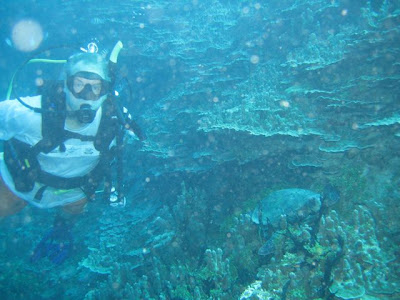 Dad spotted the turtle again and sneaked up behind it for a picture! 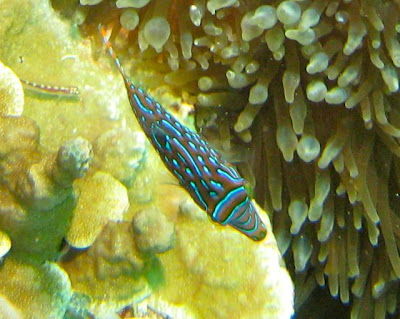 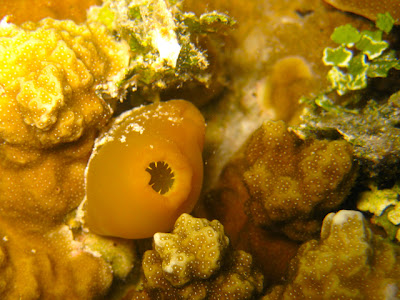 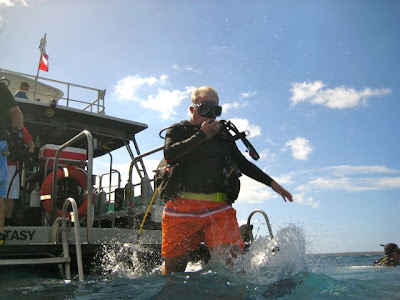 The Sunday before they took off, Nick, Dad and I signed up for a boat dive. They were doing three of the best wrecks in two dives that afternoon. So we set off on our first dive to the Tokai and Cormoran, the only site in the world where a WWII ship sank on top of a WWI ship and the two ships are touching. Glad my dad got to see this unique dive site, although now he is spoiled because it was his first shipwreck dive! He also got to experience going down to 103 feet! Which, for you non-divers, is deceiving because it feels the same as being at 50 feet, so it's not really that crazy. 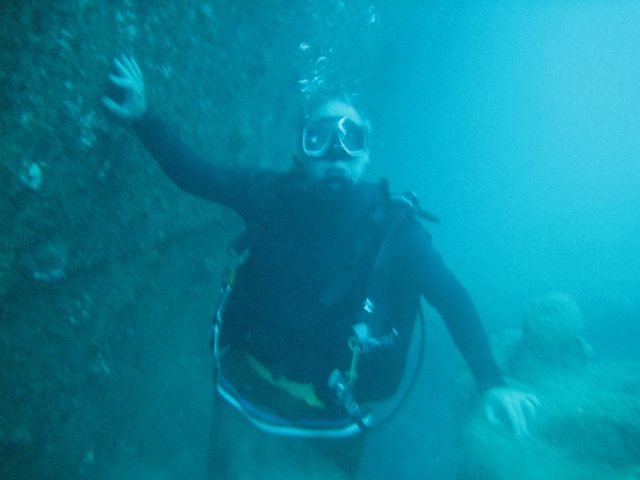 Touching WWI and WWII wrecks at the same time! 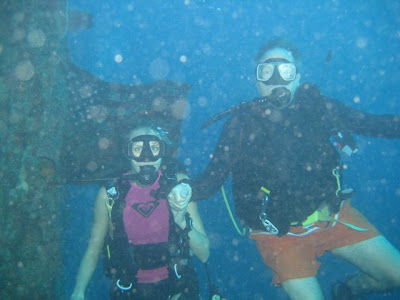 Our next dive was to the American Tanker, probably our favorite wreck to dive because of all the rooms you can go into. Usually penetrating a wreck requires specific training and equipment, but this one, settled in only about 50-60 feet of water, still has plenty of light reaching it, so you can look into a window, see the exit across the way, and easily swim through it. There's also the token American flag we always have to stop and get a picture at. Not the best visibility today (hello backscatter), but still so awesome to be able to do this dive with my dad!! 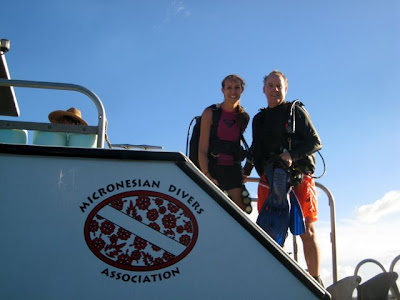 Getting back on the boat after our last dive - woohoo! 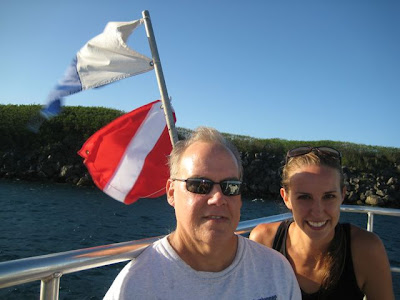 Thanks for going diving with us Dad! And thanks Nick for taking all the pictures, as usual. I wonder where we will all go diving together again next!
Posted by Peyton Roberts at 8:27 AM