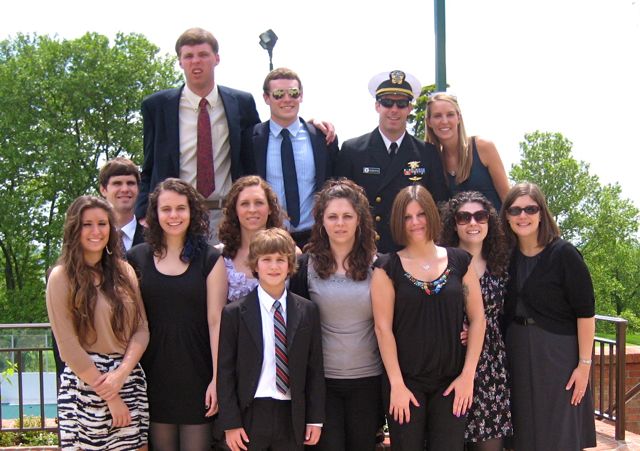 One of the remarkable things about the weekend with Nick's family in New Jersey is that all of the immediate family, children and grandchildren, were able to be there. Over the past ten years since I've been included in the family gatherings, it seems there has always been one person who couldn't make it for one reason or another. Work or school, travel expense or other conflict. It's amazing how, with such short notice, all of us were able to convene from all over the country (and world, I suppose) to be here together to celebrate MomMom and to be there for PopPop. 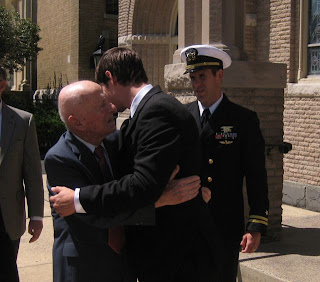 The visit began Thursday evening when we arrived in town greeted by Nick's immediate family. Matt and Russ had arrived that afternoon. Other family flew or drove in from Florida, Pennsylvania, New York, Maryland, and Virginia. That Friday morning, the big reunion began as the other aunts, uncles, and grandkids arrived in town for the visitation. It was so much fun as, family by family, they walked through the door of the condo that held within its walls the last 30 years of family memories.

After hugs and brief catching up, we went to the funeral home for the two visitation services. Literally hundreds of people showed up, dodging the sometimes intense downpours, to pay their respects and be there to support the family. The time also allowed all of us grandkids (I consider myself an adopted one since I am now a grandchild orphan) to really sit and talk to each other. We shared stories of MomMom and talked to each other about what was going on in our current lives. It was apparent to me how much more grown up everyone was since our last big reunion. More grandkids had graduated from high school and college and started their adult lives. It was also evident looking around at what good friends these cousins were with each other. No question MomMom's example of love has permeated their acceptance and respect of one another. 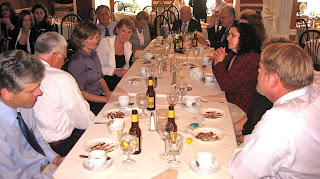 between visitations, the entire family went to dinner at a favorite Italian restaurant we had celebrated at in years past. It was here that we shared stories and memories of MomMom, accompanied by laughter and tears. The memory idea had been my mom's suggestion, so part of me felt bad, somewhat responsible, that so many of these happy memories brought such sadness in light of MomMom's departure. But as I reflected on my own last four years of saying goodbye to grandparents, I withheld my urge to apologize for their tears. There's no easy way to get through losing someone so special. It's just going to hurt for a while. And that's okay. 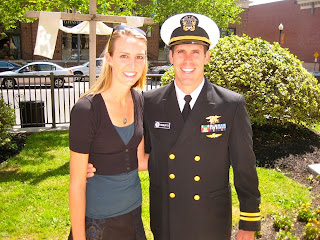 The next morning, we convened at a beautiful church in Red Bank for MomMom's memorial service. Nick went the extra mile and wore his uniform, which MomMom would have loved seeing. The service was absolutely beautiful, a true celebration of the graceful woman MomMom was. Beautiful as the church was, even more beautiful was the perfect blue sky and sunshine that served as the backdrop for the day. It was very fitting. The day before had been cold, rainy and gloomy as we met in sadness to pay respects. Today we were surrounded by glorious warmth and vibrant sunshine that illuminated the Navesink River we overlooked at the reception. Since MomMom and PopPop were due to celebrate their 65th wedding anniversary this fall, PopPop decided the celebration must go on and planned the reception accordingly. At the reception all of the grandkids did a toast to MomMom. We ate some fantastically delicious food (extra amazing compared to food in Guam!) and stuffed our bellies with desserts (I instituted a rule on this trip that on the day of a grandparents' memorial service, you can eat as much dessert as you want. It's a really great rule!). 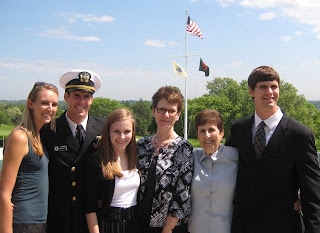 surprise for me this day was that so many of Nick's Dad's side of the family drove in town for the service. They live within a few hours' drive, but for whatever reason, it never dawned on me that they would be there on Saturday. It was such a treat to get caught up---again, in person---with his Grandmom Roberts, Aunt Cathy, Aunt Patti, Uncle Craig, and cousin Caroline. In a week where we said goodbye to two family members, it meant a lot that we were surrounded by so many others. 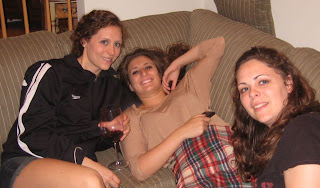 After the service, we went our separate ways for naps and a change of clothes, then reconvened at the condo for an evening of hanging out. We ate pizza, watched the NBA playoffs, and just enjoyed this last bit of uninterrupted time together before the trips home began the next day. I can't say enough how nice it was to get to talk to so many cousins one on one to hear how their lives are going. Amazing how much this 48 hours of visit time could do to erase the 10,000 miles of distance that usually separates us on a daily basis. Gatherings like this make you realize how important family is. That sounds generic, but there are some elements to this whole group of people you're born related to that can't really be put into words. 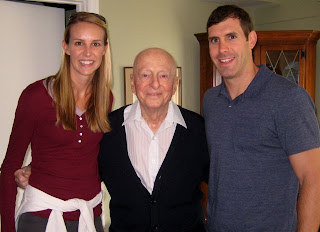 The next morning came all too quickly, and much like Friday, the northeast gloom and rain had returned to accompany the sadness of our imminent separation. Several of us were flying out that Sunday, so the morning was spent recapping the wonderful weekend, taking last pictures, and giving those last important hugs. As I rode to the airport, I was filled with a familiar feeling of gratitude for having been here in person to make and recount these memories with Nick and his family. So strange having gone to two of these services in these same week, to have lost two special family members so separately yet so close together. And yet, it was only the timing that allowed both of us to be here, as I don't think I would have been able to make the trip with Nick from Guam. 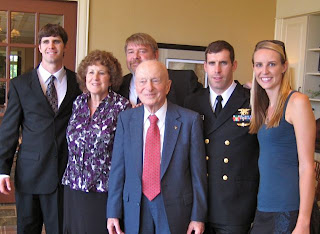 If timing is everything, I have to wonder about the timing of this week, in which I lost my last grandparent just days before Nick lost his first. I don't have any answers, just that there is, indeed, a season for everything under heaven. A time to mourn and a time to dance. A time to be born and a time to die. I don't always understand heaven's timing, but just this one time, I had to appreciate it. For it allowed all of us to be together to remember and to celebrate a most special lady. And there's just something to say for the power of a family that comes together to support one another. MomMom would have been so proud to see it. Probably explains why the clouds were pushed away that beautiful day, so the view from heaven was a little bit clearer. 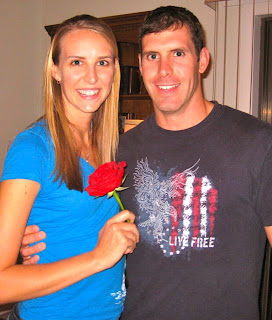 One last mention I want to make about this weekend was originally going to be its own post. The day of MomMom's service was also the 10-year anniversary of the night Nick and I had our very first kiss (Monday Monday!). We can now say we've been together for ten years, which seems like a long time when you consider 10 years before we hadn't even graduated high school. Once again, an interesting milestone to reach considering the timing. Ten years later, I feel so much a part of this family. And to think… it all started with a kiss :)
Posted by Peyton Roberts at 7:35 AM