Ever since I left my second job in November, I have been tentatively planning to come back to the States for a visit in January. Nick was going to be off island, things at the church would be fairly low key, and the rest of my days were wide open. Combine that with one of the military's most lucrative benefits---Space-A travel---and I had a recipe for a glorious visit.

In Space-A travel, the "A" technically stands for "available." But it could just as easily stand for "adventure." Every day the military has different kinds of planes in transit for various reasons between its bases all over the world. One of the benefits of being an active duty spouse stationed overseas is having access to fly Space-Available without my sponsor (Nick). Basically, if there's an available seat and you want on, you've got a free flight to wherever the plane is heading. The catch is that the flight you're waiting for may not take passengers, may not take off, or may not ever even arrive.

Being in Guam the past six months, I've heard a number of exciting and horrifying stories about Space-A, which is why I approached my trip back to the States hesitantly. Some stories I've heard boast about how easy it was for someone to drive from their house five minutes from the terminal, get on a plane that stopped once in Hawaii and fly onward to a base just miles from their final destination all for the fabulous bargain price of zero dollars. On the other hand, I've also heard stories of people who tried every single day for two solid weeks to get off Guam. And others who got on a plane to head back to Guam who flew halfway home only to have the plane turn around midair and return to its takeoff spot where passengers had to start all over again waiting for a flight. All in all, it's a total gamble. But considering the possibility of seeing so many friends and family while I had the time to spare, I figured it was worth the risk.

So Wednesday afternoon, Nick and I drove to the air force base, 45 minutes from home, to find out the flight outlook for the next 72 hours. I'd been tracking flights all week by calling the 24-hour hotline and I knew that there hadn't been any the last few days. I was a bit worried that whatever flights there were would be packed with interested passengers who had been trying to get out amid the absence of flights. The guy at the terminal said there wasn't much in the next few days. The first flight he told us about was to Elmendorf Air Force Base. I looked at Nick and said, "Umm, isn't that in Alaska?" Sure enough. I laughed out loud and quickly moved on with, "Okay, what else you got?" There was a plane going to Hawaii then on to Northern California three days out, but it was on an unreliable plane and there was no word on how many seats would be available. All in all, not great news considering I was hoping to start flying out the next day to maximize my time in the States.

Taking advantage of our gas usage to get to the air force base, Nick and I embarked on a round of golf (I mean, it was ladies-play-free Wednesday). Somewhere around hole 7 (with my mind clearly on Space-A and not on my chip shots), I said, "Hey, aren't Ashley and Robbie stationed at Elmendorf?" Sure enough. Then Nick piped in with some other rationales that he must have been mulling over. "I know it sounds kind of ridiculous, but you'll have a lot better chance of making it to San Diego if you just get off Guam. If I were you, I'd hop on the first flight heading East." An interesting thought. Alaska in January? Could my venture to friends and family in the Lower 48 really require a trip from the equator to practically the North Pole?

After getting in touch with my Elmendorf friends and having a backup of a place to stay, plus the prospect of a bonus visit with friends I hadn't seen in ages, my Space-A journey began. Nick dropped me off at the terminal on Thursday night around 11pm. When we left the house the flight was supposed to check in at 2:30 a.m. and rather than interrupt both of our sleep that night, I decided to bear the brunt of the inconvenience. When we checked in at the terminal we found out that the Elmendorf flight wasn't actually checking in until 8a.m. Awesome. That meant, because of our one-car transportation setup, I was spending the night in the terminal with no guarantee that it would get me anywhere. BUT there was a bonus flight to Hawaii that was leaving before then that I had a chance to get on, so things were looking good either way.  So Nick left and we said goodbye not knowing if we'd see each other the next month or the next day. The rest of the night was long and sleepless, as the Hawaii flight never panned out, and I waited hour by hour for 8am to get there to find out if I would be one of the 20 possible passengers who got a spot.

Many granola bars and too many hours on Facebook later, 8a.m. finally came. Turns out despite all the people trying to get off Guam, only two... TWO... people were interested in Alaska in January, despite the 54 available seats. But at least one of the uncertainties (not getting a spot) was taken away. We got boarding passes, went through security, and were waiting for our ride to the plane when we heard there was a "maintenance" issue that would set us back an hour. Uh-oh. An hour went by. Then another half hour. We were getting antsy, so we had the terminal guy call the flight crew guy, who reported that they hadn't even spotted the maintenance issue at that point. Great. I texted Nick to tell him I might need a ride home after all of that sleeplessness (in the back of my mind, I'm thinking, what Alaska flight crew wants to fly off 85-degree Guam back to Alaska in January???). As soon as I hit "send" on the text, a knock on the door came and a guy in a flight suit said, "We're ready!" 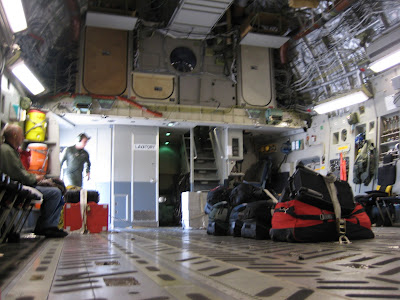 Instantly, a bus arrived to take us to a C-17, a plane Nick has traveled in to and from deployments on many occasions. I could tell as he described my flight options, he was kind of excited for me to get a chance to fly in one of these, and he prepared me well for the ride. Sure enough, the inside was enormous! It's like a flying warehouse, with plenty of room to hold pallets of gear, supplies, etc., that the military is transporting across the world. Supposedly I lucked out because not only were there not a lot of people on this flight (flight crew + 2 passengers), but there was only one single pallet. Nick said he and his guys never traveled that light before.

In addition to requiring spontaneous maintenance, military aircraft are notorious for being freezing cold inside, like 40 degrees. Those of you who know me well know I get cold in a climate change as simple as shade... and that my feet are often mysteriously colder than the surrounding outside air (Nick still marvels at this). So to get around this, Nick hooked me up with his super compactable down sleeping bag for warmth, and a blow-up ground pad for comfort. I got on the flight, set up my nest, and with the help of earplugs and an eye mask, passed out for the first half of the nine-hour flight. It was hands down the most glorious plane sleep I have ever had, especially considering how tired I was from pulling an all-nighter the night before. I had to take a picture (awkwardly on self-timer) to show you all what it looks like in there. Pretty sweet way to travel! 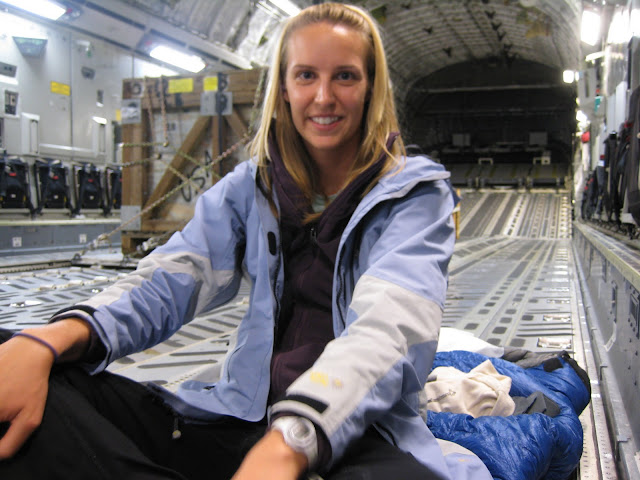 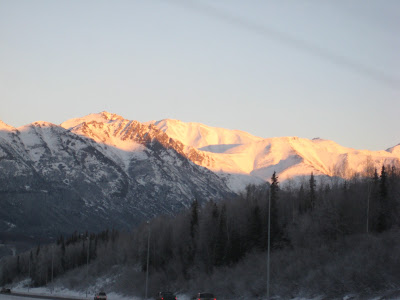 I arrived in Alaska at 1:30a.m. It was sooo cooooold! I was pleasantly shocked to see my friends there to pick me up at the terminal so late, especially considering Ashley is literally days away from giving birth to their first child. They scooped me up and drove me to their cozy house where I spent my first ever trip to USA North. And so my journey home had begun and already taken a surprising turn. But I was definitely closer than when I started and excited to find out where Space-A travel might take me next. All this adventure for the bargain price of zero dollars. Not bad!

Posted by Peyton Roberts at 7:00 PM