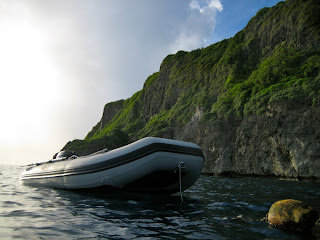 Most of you know we had a sailboat in San Diego. Many of you who had the chance to join us on it know we never quite got around to naming it. There were lots of great suggestions (such as "It's a floater," "NavyGator,"and "Tootenanny"), but nothing really stuck (correction: nothing that really stuck and was appropriate enough to say at church). We sold the boat without naming it. (My sister went on the last sail and decided its name was "Anonymous." Great idea but too last-minute as usual Court :-P) 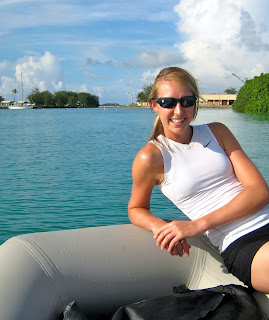 Knowing the potential for off-shore diving and fishing here, we brought a small boat with us from San Diego. It's a 12' inflatable catamaran zodiac type with an 18HP motor. It's zippy, lightweight, big enough to handle us and our dive gear, and small enough for the navy to ship it for us. We (actually Nick) custom adapted a trailer to fit it. We were ready to drive it off into the sunset the second it came off the moving truck. It, however, wasn't on board. But after a few frustrating weeks of motor troubleshooting and a weekend getaway at outboard rehab, it works! A whole new layer of exploration and adventure on Guam has begun! 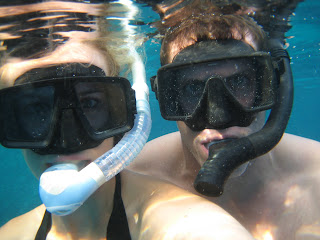 So backing up, I have to tell the story about the packers from moving day San Diego. When it was time to tackle the boat pieces, they approached the motor cautiously. It was a pretty big monster on its motor stand. All wrapped up in brown paper and plastic wrap, it looked about the size of a refrigerator. When it was ready to label, I could see two of them discussing something in Spanish. I, of course, was trying to eavesdrop without letting on that I knew a word or two. Then one of them looked over to me and asked, "Ma'am, thees ees a boat motor? A motor for boat?" I said yes, of course, and assumed I would see "boat motor" scribbled out in sharpie along the brown paper. 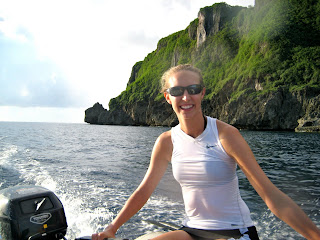 "See?" he told his buddy. "It's a propeller!" He was so proud to have remembered such a big, specific English word. He wrote "Propeller" all over the brown paper covering the boat motor and on the move paperwork. I didn't have the heart to tell him that... it's actually a boat motor and a propeller is just one of its many parts. So, that's how we came to name our second boat "Propeller." It's quite fitting... because that's exactly what it does. In fact, we would be completely unpropelled without it.

So our first chance (the hour we picked it up from the shop), we took it for a spin. It's so easy to hop out and go snorkeling off of. Haven't tried diving yet, but I won't be able to say that for long (waiting for Nick to get off work so we can dive the Blue Hole!). Here are some more pictures from our first excursion with our trusty Propeller.

A rainbow found its way into our picture :) 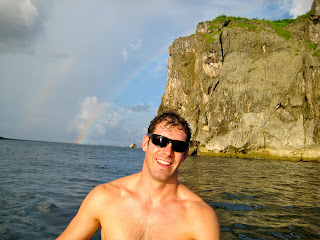 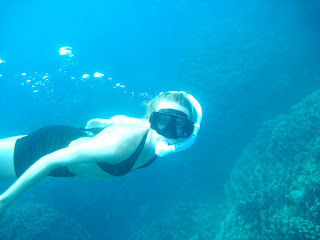 Nick found a sea turtle! Tough to see because he's down about 30', but it's there! 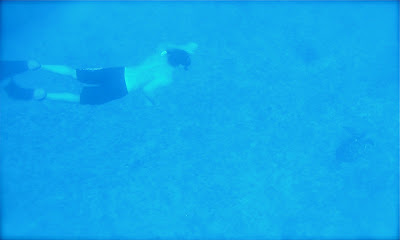 Propeller, views above & below water 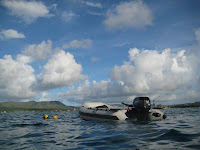 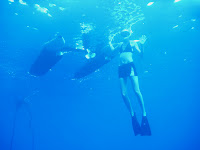 Someone's been working out (shocking, right?) 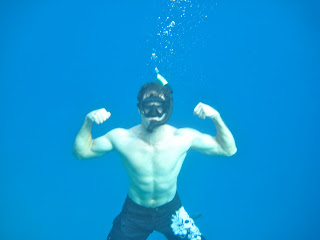 Nick says, "Come visit us, or I will beat you up."

Posted by Peyton Roberts at 1:21 PM