After two weeks of gold-medal Olympic watching, this week has taken a decisive turn as Nick and I began sorting through everything we own preparing for the move. As we head into yet another weekend (how is it Friday again already?) just about every drawer, cabinet, closet and bin has been sifted through ahead of the movers coming... on Tuesday.

The process has been awesome in some ways. We're now at a point where we know A) where we are for sure moving and B) how much space we will have. Those two vital pieces of info have made getting rid of unnecessary stuff so much easier. As I write, there is a huge suitcase on the floor at my feet full of clothes, books, excess snorkel gear, dive books, and household items to take to the thrift store or give away to friends. As a result, drawers and cabinets and closet doors are closing easier all around. The house just feels lighter.

Going through our stuff has also had its moments of hilarity. Last night I went through all my files, filling up the recycling bin, and also running across all kinds of things I'd forgotten about... like the list of inside jokes Nick and I logged on our trip to Vancouver Island ("There is cheese in my zipper") and the photo scavenger hunt list from his 21st birthday in Annapolis (in which he went skinny dipping in the Severn River in November). In other closets, we've come across ridiculous items like the hat from my Japanese tourist Halloween costume and the sled Nick had to buy as we approached the entrance of Yosemite National Park (yes, we've been storing a snow sled here for the past two years). At one point, Nick called me over to check out a picture of him from his Plebe year at the Academy when he was running track and had dropped weight into the 140s. We laughed at how skinny he was then... and how blank his white uniforms looked without all the colorful ribbons he has since earned. 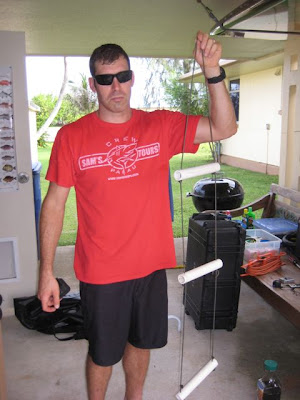 But there have been other moments throughout this process when I have found myself staggering into the reality that this impending move away from our life on Guam is really going to happen. As we were going through the outside storage shed, I heard Nick say, "Hey Peyt, look." He was holding up the ladder he had made out of PVC pipe and 550 cord to assist us and our visitors in getting out of the water and back into our boat. That one little display of string and pipe brought back an incredible flood of memories of our first months on island exploring Guam's coastline on Propeller. It was a decisively awesome era in our time here. I never would have thought I would be blinking back tears on account of a homemade ladder.

Another unexpectedly difficult moment was just last night when we took down the paisley curtains in our kitchen and living rooms. At my request after we first moved in, Nick spent an hour on each window drilling into the concrete bunker walls to install curtain rods so I wouldn't have to stare at the ugly standard-issue vertical blinds for two years. More than any other single item of decor in the house, those curtains made this place feel like home. As soon as they were down and the vertical blinds were back up, the house felt immediately different... and more than slightly less like home.

When Nick mentioned he'd also taken down the three wooden masks that distinguish the front of our house from every other identical house in the neighborhood, I once again found myself blinking back the tears. Those smiling faces have welcomed us home at the end of every day's work and after every long trip away. They are no longer there to greet us.

Wednesday night I took our youth group to the weekly festival Chamorro Village. They always have fun buying ridiculous toys, pranks, and gag items and stuffing their faces with BBQ and mango juice and banana donuts. We went back to the church to play one of our favorite games (kick the can). While we were eating brownies, we went around the room and did our usual ritual of revealing highs and lows. Highs are the best part of your week and lows are the worst. My low was the realization that I don't have many Wednesdays left. As I spoke these words, I caught myself blinking back the tears once again. And it suddenly hit me how much I am going to miss each of these kids. 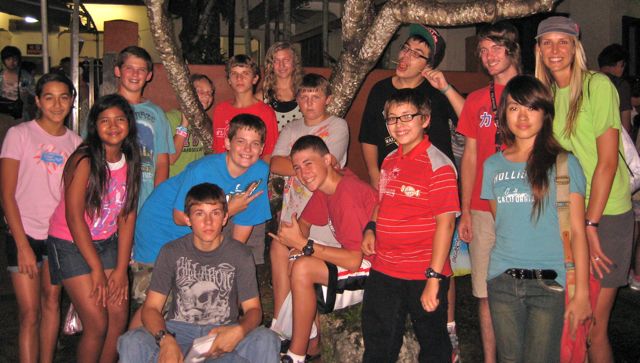 Going through my grad school papers in the filing cabinet, I was reminded of a term we were instructed to incorporate into one of our semester projects. It was a trendy word in social scientific research lingo at the time. The word is liminal, loosely defined as the state of being in between two worlds. This past week I have found myself going back and forth between, "It will be so great to watch football games on East Coast time and not during breakfast this year," and "I can't wait to be in driving distance from your cousins." To "What am I going to do when I have to wear socks and jackets?" and "How am I going to get through the week without ridiculous comments from middle schoolers?"

This transition period between Guam and the States has surely begun. Over the next few weeks we will begin the rituals of getting excited about all that we have to look forward to (hardwood floors! Starbucks! family and friends!) while simultaneously saying goodbye to our favorite island spots (Dadi Beach, Palm Tree Golf Course, barbecues at Jake and Erin's). We know without question that the life awaiting us in Virginia will be a good one. But life here as we live it now is just so sweet. And so we remain floating in the liminal space between here and there... between island time and reality... between Peyt's Island and whatever awaits us in the chapter to come.
Posted by Peyton Roberts at 4:15 PM