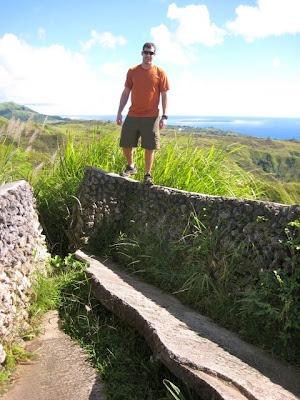 For the longest time I have envisioned a series showing you the other side of the story here. Let's face it. My rosy outlook and forgiving photograph selections on Peyt's Island may have given you a slightly unrealistic impression that this place is, in fact, a perfect paradise. Fair and balanced storytelling is in order, and so I continue.

I have hesitated to go down this road for a couple of reasons. First, I thought by sharing with you all the ugly, broken, sick and slow things about this place, some of you may change your mind about coming to visit us. But over halfway through our time here, I have already figured out that few of you have the time or the money to actually come visit. I have given up expecting any more visitors after my family comes and will just be pleasantly surprised if anyone else shows up (so the few dear friends who HAVE made it out here get MAJOR points for the rest of their lives for making the effort! Thank you!).

Second of all, you all know my partyline is that I LOVE it here! And I really do. Up to this point, most of my little jabs at Guam have been in jest. A slower pace than we're used to back home, some terrible radio stations, a bowling ball found in the jungle. Cute...

Today I had lunch with a friend who I don't see very often because she lives on the Air Force base. We became friends because we both went to the University of Florida, and if you're a Gator who's found a Gator, you're a Gator who's found a friend. But her outlook, generally speaking, has bothered me. She started our lunch today with, "I'm not going to sugarcoat it. I hate this place!" (I have removed the expletives, but feel free to insert what and where you find appropriate... or inappropriate). My guard immediately went up. I love Guam! That's my partyline and I'm sticking to it... right?

So as she continued, I learned that they were forced into orders here (whereas Nick and I so luxuriously chose to come here). Her husband is a helicopter pilot who will spend the majority of his time deploying from Guam instead of actually being here (yuck!). They just got married in February and she gave up a job and professional career in the States she really loved (I gave up having a career years ago), in addition to living away from her family for the first time (whereas I haven't lived near mine in 10 years). She now finds herself substitute teaching (babysitting kindergartners) as many wives here do. Her husband is hardly ever home when she is (due to flight schedules) and they are basically just biding their time until he deploys in December. Considering her circumstances it dawned on me... if her Guam were my Guam, I'd probably hate this place too!

So during the course of our conversation, my friend's perspective made me realize that my emotional fondness of this place has very little to do with Guam itself, and is actually centered around all this bonus time with Nick! Same reason I am not too excited about Virginia Beach. It has little to do with the location and very much to do with how much time I foresee spending with Nick there.

So with that analysis now on the table, I proceed with... the other side of the story.

The short version of the story is that everything here breaks. Everything! And I don't mean in the move across the ocean on the way out. We only claimed three damaged items out of 8+ crates of stuff we moved out here. No, instead it's everything that has any contact with the harsh, hot, humid, salty, moist outside air is destined for needing repair. Here's a short list of some of the items we own that have broken since we've been here (in 15 months):
That's all well and good, right? Small things that Nick has become a pro at fixing, or thankfully are covered by warranty. At least nothing big or really expensive has broken... right?

Don't get me started.

Notice that you haven't seen any stories featuring trips on our fabulous boat, Propeller, in the last SIX months? We came back from Australia in May not just to a bout with pneumonia, but also to a very broken boat. The weight of the outboard motor combined with the harsh outdoor conditions here caused the transom to rip off the back of the boat. Yeah. An entire side of the boat (the side that holds the mechanism that propels it... kinda important) is no longer fully attached. Or functional. We've had no luck contacting the manufacturer for advice. The warranty ran out last year. And our advice from other local boat owners is that if you drop it off at the marine fix-it shops here, there's a chance they may not fix it properly and the boat will be irreparable after that. In other words, best to do it yourself. Ugggghhhhh. Everyone wish Nick luck as he starts to seriously tackle this daunting project this week... in hopes of finishing so we can use it to take my parents around.

Having a boat out of commission when you live on an island is a huge bummer. But at least we haven't experienced car trouble, right? Here we go...

Many of you already know about this, despite the fact that it was never mentioned here. I was in Houston in January when it happened. I got a call from Nick telling me there was a "major problem" with the truck... the "major problem" being that it was IN Sumay Cove. Sumay Cove, remember? The place I posted a picture from in my very first post about Guam, citing "vacation blue" water? Nick had backed the truck down the ramp, put it in park, put on the parking brake, and got out to head to the dock to pull the boat around onto the trailer. I guess it had been a while since someone powerwashed the ramp? Or just a really unlucky day?

Well, a few seconds later the truck (poor Nick) is sliding (not rolling) backwards down the ramp... into Sumay Cove. Luckily the trailer wedged itself at an angle against the ramp keeping the truck from sliding further in or even floating away. They towed the truck out, but the damage was done. It was completely totaled in 3 minutes. The truck only had 40,000 miles on it :(

So our truck and trailer were totaled instantly... but at least our boat didn't break, right? (ha...ha...). Insurance helped us out with the new truck and trailer so after a month we were back in business. Until the boat broke and has been broken ever since. Awesome. 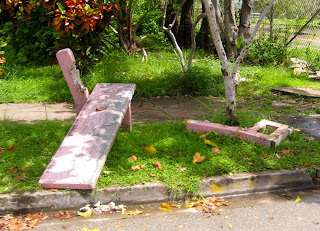 In addition to our woes, there seems to be a trend for brokenness on the rest of the island too. Whether it's careless citizens breaking things, poorly maintained infrastructure due to severe lack of local government funding here, or just extra wear and tear from the everpresent enemies of sun, rain, and salt, stuff here just breaks. This whole place is a petri dish for the second law of thermodynamics... the one that basically says everything in the universe is in an irreversible state of decline. That's Guam alright... or at least one of the very real and frustrating things I don't love about this place.

Posted by Peyton Roberts at 9:19 PM

Email ThisBlogThis!Share to TwitterShare to FacebookShare to Pinterest
Labels: Guam