You've got to TRI 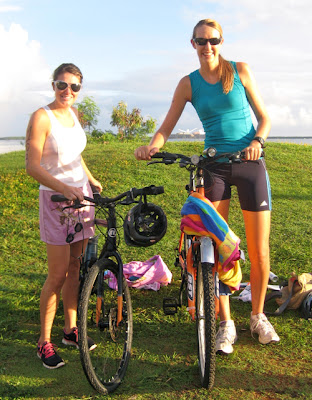 This Tuesday I did my very first triathalon! It was a super sprint, which means short distances on all three of the exercises. It was a fantastic first race for me both because of the distances and because it was informally organized by a group of fitness enthusiasts here on base, so there was no pressure to try to beat a certain time... because no one was timing you. In fact, their main goal was to get people out there to try it. They cut out all possible excuses by allowing people to swim with a snorkel & fins, borrow bikes from other racers, and walk instead of run. The point was just to do it. July was the first month since April that I was finally able to start working out again. It was a painful, slow start, not because my body hadn't healed, but because I was officially out of shape (ugh). Having the tri to look forward to was great motivation to ease my way into cardio again. My new friend and neighbor Shea went in on the adventure with me. We stuck together for most of the race. Ready for some pictures? Okay, on your mark, get set, go! 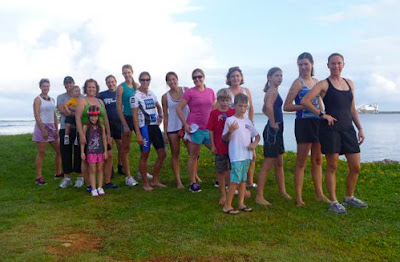 TRI-ers lined up before the race. They had a separate course for kids :)

Our swim was in Apra Harbor off San Luis Beach. Can you spot me? I am in the center of the picture with the white swim cap and my arm in the air (you can't miss that great form!). Actually, generally speaking I am a terrible, inexperienced stroke swimmer, so the originally posted 400m distance was a bit intimidating. There's no way this was 400m, though, because it only took me about 5 minutes to finish (when an actual 400m takes me 15+). 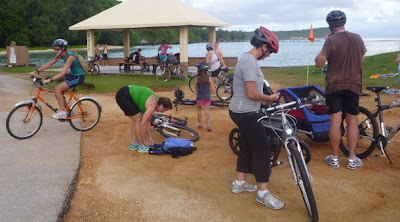 Transition time! Out of the water, quick towel off, and hop on the bike for the 10k (6-mile) ride around base on my glunky mountain bike. So far so good! 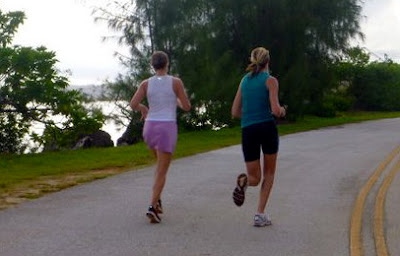 Transition #2: Still going strong as Shea and I left for the 1.5-mile run.
Not gonna lie, about 40 minutes into cardio, I was huffing and puffing at this point. 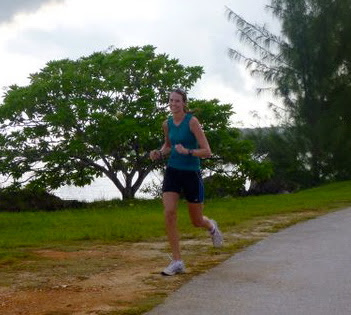 After powering through a 15-minute run, I rounded the corner to the finish line. Turns out Shea is a sneaky good runner, so I insisted she zip along in front of ol huffy puffy me. But I finished strong and didn't stop to walk, which was my goal. And hey, meeting goals is the whole point.

After being so out of shape, I have to say this was a great jump start back into feeling strong again. I went to the gym the day after the race for a workout class that I'd been trudging through or making up excuses to miss. Suddenly the class was completely doable again. I felt a lot lighter, faster, and stronger. Definitely hope to do another race soon, potentially as one of my regular workouts out here.
Coincidentally, Nick also did a triathalon this week... a real one... one with race bibs, finish lines, and road bikes that cost as much as small cars. He signed up kind of on a whim since he happened to be going to Hawaii for work this week, the same weekend as the race. So he didn't specifically train for it, and he certainly didn't have the 20-hour time change or fancy pants road bike helping him out. And yet my beast of a husband finished 65th out of 700 participants and 14th in his age bracket! Way to go Nick!
Posted by Peyton Roberts at 2:00 PM