All the Pregger Ladies 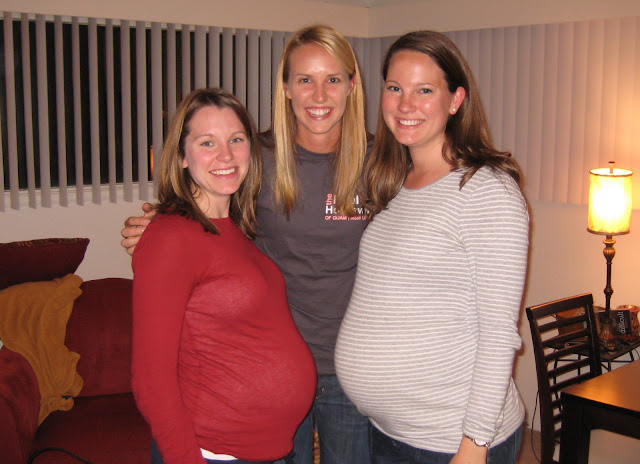 To say there are a lot of new mothers in my life is somewhat of an understatement. Because of all of the new life coming into the world, I have been envisioning a post dedicated to all of my pregger and new mom friends. At my Bible study in San Diego, I insisted on taking the above picture with this blog post in mind (although I was promptly accused of just wanting to look really skinny by standing next to these nine-monthers). No seriously, I just wanted to honor my dear friends at this life-changing time with a blog post!
On my three-week trip back home, I saw six, yes SIX pregnant friends who were more than halfway through. Five of them were going to be first-time moms. And four of these gorgeous, glowing women had their babies within a week after I had a chance to visit with them. So unfortunately I didn't get to meet any of the babies, but I did get a quality last visit with these future mommies while they had their hands free!
So I will start with Mallory (above, right). Mallory lives in Coronado a block from where we used to call home. She's in my Bible study and my wine group (or, well, sparkling pomegranate group). After more than a few painful bumps in the road to mommyhood, we are all so thrilled that baby Norah came into the world safe and sound, even though it was about a week after her due date and a week after I left town. In fact, while I was in Hawaii living in complete uncertainty of when I would get to Space-A back to Guam, Mallory was simultaneously experiencing the complete unknown about when her daughter would enter the world. There was a whole lot of waiting going on. I can't wait to meet little Stinker Moffit one day. I will have to give her a hard time about arriving so darn late. Although Norah did win the race and make it to the world before I made it back to Guam :) 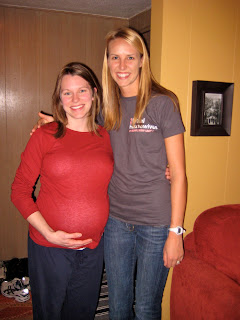 Next up is Sarah. I became friends with Sarah a few years ago when her then boyfriend Neal was deployed the same six months that Nick was. After getting married and buying a house, Sarah joined our Bible study and was a great friend to have when our husbands were again deployed for the same two and then six months back to back. Of all the mommies, Sarah was the only one adventurous enough to wait until delivery to find out the sex of the baby. Unfortunately that joyous moment was overtaken by a delivery emergency that brought their sweet little guy (yes, a boy!) into the NICU for a few scary first days. I am SO relieved and joyful to have gotten the news that he is healthy and at home and the bonus news that Neal was able to be there for all of it. Welcome to this crazy world, Caleb! So glad our prayers were answered!

Looks like Sara Lee has a little somethin cooking in the oven. Sara is one of my best friends from high school. She announced her pregnancy at our going away party in Houston before we moved to Guam. I remember being so excited but also so bummed that I was going to miss the entire thing. Luckily she kept me super in the loop on every exciting and hilarious moment on her blog (which was actually what gave me the idea to start Peyt's Island, so props to Sara). Sara's little girl was measuring Texas size, so they decided to do a scheduled C-section a week before the due date. Savanna came out at 8 lbs., 9 oz and is an absolutely gorgeous newborn. In fact, Sara wrote one of the most beautiful blog posts I've ever read, so if you have a minute and want to read something beautiful, click here. Careful, though... it might make you want to have babies yourself (thanks, Sara... thanks). 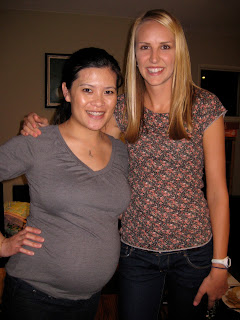 I think of all of the babies, I am most excited to find out what this one looks like. Huy's husband Ben is a blond surfer-looking guy and they are having a little boy named Jackson in April. I am so curious to find out who he's going to most resemble and what features he will take from each parent. There is a lot of uncertainty right now with Ben's deployment schedule, so we just have to remain hopeful that he will be there for the birth. I had lunch with Huy on my last day in San Diego. Not long before we were going to have to go our separate ways, she put my hand on her belly and I felt Jackson give a good solid boot. I completely lost my composure at that point thinking of all I would be missing (which I thought was ridiculous... aren't the pregnant people supposed to be the emotional ones?). I felt like I was the one who should be throwing her a shower and bringing over dinners that first week. It really sunk in how far away Guam is and how much I want to move back to San Diego when our time there is done. So excited for you Huya and Ben!

Moving right along, Debi is the only family member to make the list currently, and she's also the only repeat momma. Debi is Nick's mom's cousin, though she's so young and fun, we have always just considered her our cousin. She has a daughter Madi that Nick and I absolutely adore and since she lived in north San Diego County for most of the years we were in Coronado, they were the only family within an hour's or even a day's drive of us. She lives in the Bay Area now and is currently expecting TWINS!!! The two little guys (yes, boys!) will make their appearance in March some time. I am beyond thrilled that they will all be moving back to San Diego soon so we will have family nearby again when we're back in SoCal. 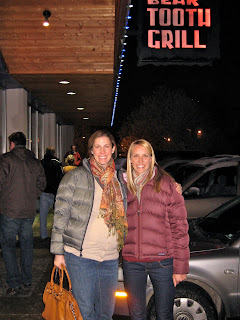 The super surprise visit of all was with Ashley, my sorority sister from college, in Alaska. I had no idea I was going to be there and, in fact, when I first went on her Facebook page to message her about possibly being in her backyard, her status update was about having ongoing contractions (whoa there!). I knew she was getting close and when I talked to her she said, "I may be at the hospital, but you are welcome to stay here." Crazy timing! But no, I didn't get to meet Jeffrey. He came a week later. But chances are I will get to meet him soon since Ashley and Robbie are moving to Hawaii next month! Oh, and I would like to add that Jeffrey was named after one of Robbie's pilot friends from his squadron whose plane crashed out there in November :( They all adored him and so when the time came to choose a name, they knew exactly who they wanted their little boy to be like. Such a wonderful tribute in the time of such sadness. 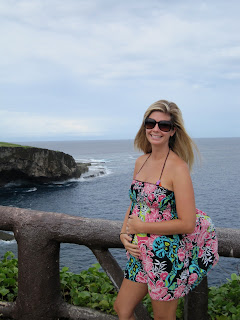 And finally, back on Guam, we have Kate. I took this picture in Saipan when she just started showing (we made her pose). Now starting her third trimester, she's just a tiny bit bigger than in this picture. Her husband Ben went to the Naval Academy with Nick and they also went through training together and now work together out here in Guam. Of all the friends, Kate is the one whose pregnancy I have been able to be part of week to week and I have learned a lot from her (including some really scary and disturbing things... THANKS). But I've learned a lot nonetheless. Sadly, Kate is heading back to the States in just a few weeks so she can leave here early enough to travel safely. Ben is getting out of the navy about the time their daughter Sloan will be born in Charleston. Kate has had one of the most adventurous pregnancies I have ever heard of. She's continued to swim, snorkel & hike (even today!) throughout all of it and she's traveled like crazy. She went with us to Saipan at 12 weeks, then to Thailand at 20-something weeks, then New Zealand. She'll be traveling halfway around the world at the 7-month mark. She's been an awesome friend out here these first six months and I'm definitely going to miss her. And of all of them, she's the only one whose shower I get to go to. Definitely not going to miss it!

Reflecting on all of this, it's so interesting to see how many different stories have emerged from each one of these expecting friends. It just goes to show how unique each life is with its circumstances, parents, name choices, and the uncontrollable. In contrast to all of this joy, I feel compelled to mention a dear friend I saw on my trip who earlier last year found out at 15 weeks the devastating news that her baby would be born without any kidneys. Turns out he had a rare, unexplainable disease called Potters Syndrome, which affects the development of vital organs. After making the difficult decision to carry him to term, he lived only 30 minutes after he was born before his little heart gave out. Just long enough to be hugged and kissed by his parents and baptized into the Lord's care. Hearing the sad story about Deagan has made me better appreciate what each of my friends has gone through on their journey to become mothers. So much of it is chance, luck, uncertainty, prayer. And I now realize it truly is a miracle when a new life enters the world and takes a breath here. That's why I feel so compelled to celebrate these stories and each of these new lives today, especially Deagan's.

Okay, if you're like me, you are probably overwhelmed with all of this baby talk. Congratulations to all the new mommies out there! Oh, and if anyone is wondering, Nick and I are still on track to wait until we are not in the land of scuba diving and sashimi-grade everything, so I will save you the trouble of asking! Oh, and just as I had finished telling Nick about all the January babies that were born, I checked my email and found out about another one. Amy & David in Denver in August! And so, the baby train continues... choo choo!
Posted by Peyton Roberts at 7:24 PM