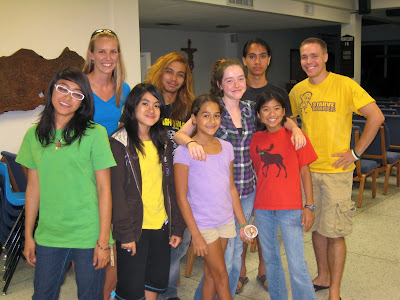 Had I done this blog thing for the past six years, I'd have racked up a number of vastly different posts that would qualify for this headline. Most of them involved digging suits out of the back of the closet, getting email set up, signing lots of HR forms, forgetting the names of a zillion new coworkers, and spending hours upon hours parked in a swivel chair staring at Windows 2000 waiting for something to happen. Well, going along with the theme that things are different here in Guam, my first week of work was refreshingly no exception. 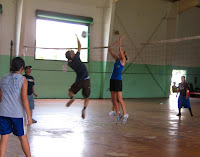 Saturday I drove to a community gym to meet up with Doug (the other youth director), two kids from our church, and about 75 other local kids from churches and youth groups all over Guam for a first-ever event called the Fellowship Games. We spent the next five hours playing basketball, volleyball, kickball, and flag football. I have to say, I definitely still have some spike left in me. And despite the odds, our underdog team came in second in tug of war! 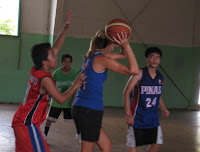 The games were fun, but the highlight of the day for me was finding myself surrounded by locals for the first time here in Guam.  Thus far my interactions with Guamanians have been quite pleasant, but they have also involved me buying something.  Within the first five minutes, I noticed an immediate difference between these kids and my kids in SoCal (besides the obviously darker skin).  The best way I can put it is that everyone was so ridiculously nice... to everyone.... to me, a towering white American newcomer, to each other, to kids from other churches that they'd just met, to other kids in their youth group. And it's not that my SoCal kids weren't nice. They absolutely were. Here it is just different somehow. It didn't seem to matter who played on whose team or who was paired with their best friend. They seemed happy just to be there. 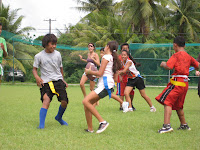 Stranger still were the manners these kids had. At one point while I was sitting by myself, a boy who's a freshman in high school sat down next to me, got in a conversation, and asked if he could get me some water, which was way on the other side of the gym.  Later on, I was standing by the snack table eating a few chips, and another high school kid got up from his chair and enthusiastically said, "Miss, you can have my chair!" I politely declined, but was so taken aback by the overwhelming show of respect and acceptance from these kids who, starting the day, I'd assumed would have no interest in my being there.
I took this observation to Doug, and he confirmed my suspicion that respect for elders is a really big thing here. My next question was, "So that counts for us too, even though we're not that old?" Yes, ma'am it does. My immediate thought was how much easier that would make my job as a semi-authority figure. Doug expanded a bit, though, saying the problem comes in because kids here absolutely cannot under any circumstance disrespect their parents or disagree with their decisions. So if parents drink or smoke a lot, or if they don't value education or setting career goals or walking the walk, young people don't have a way to plow around that. They're stuck and will likely be forced to repeat the same mistakes of previous generations. It made me reflect on that aspect of American culture... that we are individuals, not necessarily an extension of our families. That we grow up in a place where we can transform our life into whatever we want it to be. I wonder if we can ever create a culture where we can have that beautiful freedom and teenagers who proudly give up their seat for you. That is probably too much to ask.

So a successful first day with the youth was followed by a second day teaching Sunday School to the high schoolers.  Then tonight I went to my first youth group meeting.  We meet every other Wednesday evening.  Tonight we had seven kids there.  We ate pizza & ice cream, played games, and talked in groups about one of my favorite verses, Acts 17:26-27, "From one man He made every nation of men, that they should inhabit the whole earth. And He determined the set times and exact places where they should live. God did this so that men might seek Him and perhaps reach out for Him and find Him, though He is not far from each one of us." Clearly I was meant to come to this island to eat ice cream and take goofy pictures with these kids. It's all part of the plan. 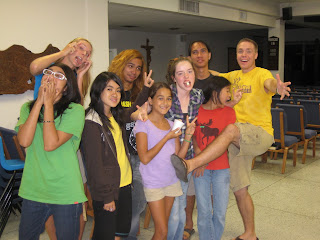 On a side note, poor Nick is off in some jungle somewhere a few time zones back.  He's working 16+ hour days, sleeping on a cot in a mosquito net, and hardly has any time to work out, eat, or call me.  It's only a two-week gig (thank goodness!), but it highlights the fact that we are having vastly different experiences here, um, especially if you compare our jobs (I mean, he works almost as many hours in one day as I do in two weeks!). In fact, he may even be back in Guam before he gets a chance to read this. But just in case, thought I'd take this opportunity to thank you for bringing me with you to this interesting new place where I can continue to learn more about the world and myself. The fact that I'm getting paid to do so is one ridiculously sweet bonus.
Posted by Peyton Roberts at 1:26 AM