Adventure in Japan - Part One 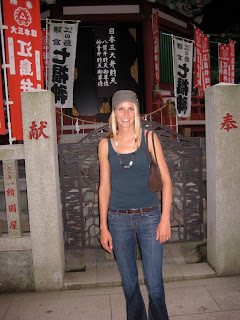 No question Nick and I have enjoyed Guam so far, but one of the major benefits from moving this far away is the opportunity to travel to not-as-far-away exotic places. With Nick traveling for work, a free week ahead of me, and an invitation to stay with my friend Mary just outside of Tokyo, I couldn’t pass it up. Not to mention, my good friend Kristi had just moved to the same area with her two small boys and was moving into her new house by herself that week. I booked a flight a week out and was so thrilled to have this adventure to look forward to. 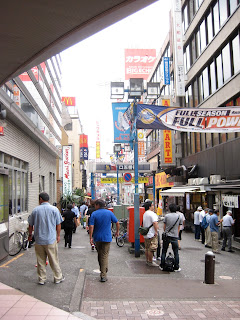 The flight to Tokyo is a blissfully easy three and a half hours. Arriving in the airport surrounded by information posted in an unrecognizable alphabet, I was struck with the realization that I had landed in the most foreign place I’ve ever been. Thankfully the signs I needed were in English. I exchanged money to Yen, bought a train ticket, and set off to meet up with Mary and her 14-month-old daughter Annika. After only a slight glitch in our meet up plan, she found me at Yokahama Station---but not before I stood around gawking at the incredible number of impressively fashionable people passing through the station. Remember when I laughed about how funny it is when Japanese tourists take pictures of random things like shopping mall entrances in Guam? Well, the tables were turned when I was the only one with my camera out capturing the train station and the surrounding streets.  Definitely not in Hagatna anymore.

After a bag drop and a quick snack, we hopped back on the train and headed out sightseeing to an island called Inagi (I think), a cute touristy area near the water. We got ice cream (my flavor somehow translated to “rare chocolate cookie”) and walked up the hill toward a shrine. Mary did her best to explain Shinto and Buddhism and what everything meant. It would be great if I could remember anything worth passing along. 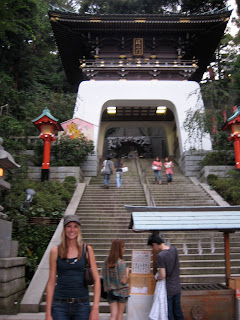 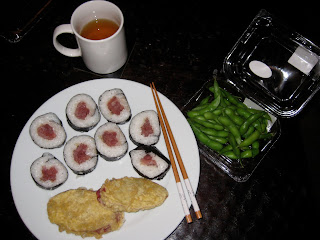 On our way home, we took advantage of one of the major differences between Japan and Guam: sushi! We stopped at the grocery store by Mary’s house and picked up sushi, tempura, and edamame. So yummy!  I thought we’d eat sushi every day after this, but somehow this ended up being our only stop here.  That’s probably my only regret of the week, but so many other highlights made up for it.


Day two, Mary had to work so she dropped me on base with our friend Kristi.  [Side note is that Mary teaches English to Japanese students.  It’s a great job for military spouses here in Tokyo. It not only pays well, but also gives them a chance to converse with the locals on a more interactive level than sharing a train car.] Kristi and Mary’s husbands are both helicopter pilots in the same squadron and they are both currently deployed.  Mary’s husband left in May and Kristi’s left just on Monday, leaving Kristi to finish up car registration messes and move into their house with the help of her 5-year-old and 5-month-old sons. FUN!

We had a fairly typical day on base – worked out, got lunch, shopped at the NEX, and went to the pool. Aside from driving on the left side of the road, we could have just as easily been on base in Guam... a nice little American getaway amid Japanese craziness.  It was even super hot—about 96 degrees—hotter than Guam actually. Kristi was one of my very first friends when we moved to Coronado. She and Ben lived in our apartment complex and at the time, their son Will was the same age that little Ryan is now. I had the pleasure of visiting them in Hawaii a few years ago and now get to take on Japan! Definitely one of the perks of the Navy is having good friends stationed all over the world. That night Mary joined us after her work and we had a delicious Mongolian BBQ at the O Club.

Wednesday we got going early, hopped on the train, and headed to the famous Harajuku shopping district.  This is a great train stop, not just because of the shopping, but also because the Meiji Shrine is right around the corner. We decided to hit that up first since it was promising to be another scalding hot day. We sweated through the lovely walk through a very woodsy area that felt worlds away from the retail jungle a few streets over. 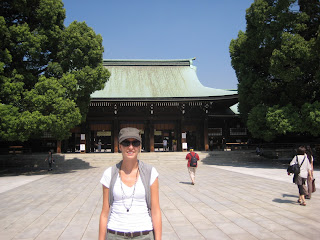 After tempura noodle soup (yum!), we set off on our shopping expedition. I was so pleased that Mary knew right where to take me first… Zara! Those of you who have traveled with me before or know any of my shopping habits are likely not surprised.  Afterwards, we grabbed a few souvenirs, did some people watching, and hit the train.  Unfortunately all of the fashion-crazed preteens this district is known for were in school while we were there, so we didn’t get the freak show I was hoping for.  We also didn’t have lines, traffic, or crowded train cars, so it all evened out. 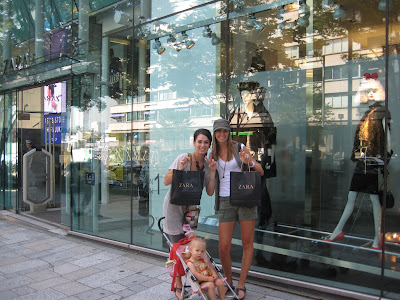 Exhausted from our long fun day shopping in the heat, we dragged our bags back to Mary’s. It was at this point we found out the unthinkable news about Amy’s husband. It was one of those strange times when, technically nothing changed, and yet it felt like everything had changed. We went ahead with our evening plans and met Kristi, Will and Ryan at the pool. Kristi took some great pictures, but since she’s in the middle of a move right now, the last thing I want to do is task her with sending them to me. (But if you are reading this, Kristi... hint, hint!).


Thursday morning hit, and it was suddenly apparent that summer had turned to fall. It was rainy, overcast, and much cooler. In fact, overnight it dropped from high of 96 on Wednesday to high of 66 on Thursday. The temperature change much reflected the change in the air now knowing what Amy was going through. It was also perfect timing for celebrating the changing of the seasons (a quarterly Japanese tradition) with a group of Mary’s friends over pumpkin dump cake, wassail, goat cheese-stuffed mushrooms, and caramel covered apples (yum!).  It was the only taste of fall I will probably have in actual fall-like weather, so I soaked it up.
I am well over my self-imposed word limit, so I’m going to save the rest of the visit and my reflections on Japan for next time. Until then, sayonara!
Posted by Peyton Roberts at 9:47 PM