Traveling Through the Unexpected

One thing I haven't shared over these past few travel posts is that while I was making my way back to the States to celebrate the life of my grandfather, Nick was simultaneously making arrangements to get to the States to say goodbye to his grandmother. He had planned to spend a week in New Jersey with his family this very week I am posting this (which is strange considering we now know all that has happened since). Unfortunately, the night before I left for Florida, we got the difficult call that his grandmother, MomMom, probably would not make it through the next few days. Nick said goodbye to her on the phone, then changed his flight to leave Guam as soon as possible with the hope of getting to see her. Sadly, he didn't make it there in time, as she had passed away early that morning while he was on the long flight from Tokyo to Newark. Part of me was crushed for him for not making it there in time. But part of me thinks it's better that we keep the memories of our grandparents pure. I think that's probably what MomMom would have wanted too.

The way things work out on these trips back to the States sometimes astounds me. When I left San Francisco, I had to book a round trip flight in order to use miles. Not knowing at that point what my return would look like, I booked my return trip to San Diego figuring I'd go through there at some point (or would cry the whole trip back to Guam). When MomMom's service was decided for Saturday, I started trying to figure out if I could make it to New Jersey reasonably with such short notice. All flight options were unbelievably expensive. Miles were out because that requires a round trip. The airlines weren't working with me at all on changing my ticket. Through a sheer stroke of luck it turned out that the return flight I'd booked to San Diego connected in Washington DC's Dulles airport. This was only about a 4-hour drive to New Jersey from here. Thinking of the bonus visits I could have with my cousins and several close friends in the area, plus the fact that I wouldn't have to forfeit the ticket or buy a new one, I decided that leg of the trip would be the perfect one to get me there in time and increase the amount of relationship territory I could cover this visit. 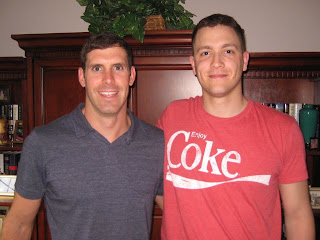 To make matters even better, my mom had the genius idea of asking Nick to rent a car and drive down to get me, so we could have the visits together and see each other even sooner. Jackpot! So Nick picked me up at Dulles and we went to my cousin Tracy's house to hang out. Nick called a buddy of his from the Naval Academy, Tre, also one of the groomsmen in our wedding. He moved there last summer after a year in Afghanistan, so we hadn't seen him in ages. Turns out he was heading home from work and lived right down the street and came right over. So easy! We had a great time catching up and hearing about Tre's plans for the future. So glad it worked out! 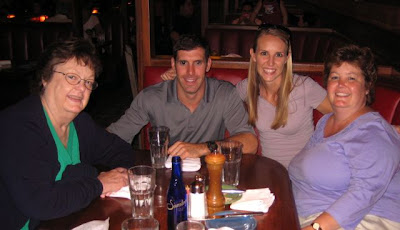 We said goodbye to Tre to head to dinner at Sweetwater, our favorite restaurant in the area where we always meet my cousin Tracy and my aunt Pat for dinner. These two favorites of ours were extremely instrumental in helping Nick and I logistically be able to stay together during his time at the Naval Academy. Together they provided anything from a place to stay to transportation to a job so I could stay in the area and be close to Nick during his summer trainings in Annapolis. This was Tracy's busiest week of the year at the company she owns, so it was a miracle she could slip away to spend the evening catching up with us. My astonishment with the DC stopover success continued. 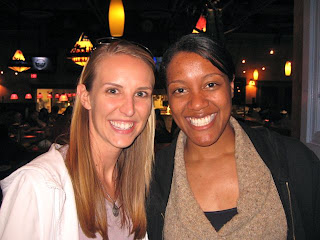 Equally astonishing was the fact that my good friend Nikki, was able to join us from dinner from way across town. Nikki was in my Bible studies in both Maryland and California (I know, right?) and has been a dear friend for the past six years. I was thrilled to get to see her and hear about her exciting new job and life and so grateful that she was willing to drop everything to come see us on our one night in DC. There's nothing like getting to hug a friend you thought you wouldn't see in the next year. These smiles are about as authentic as they get. 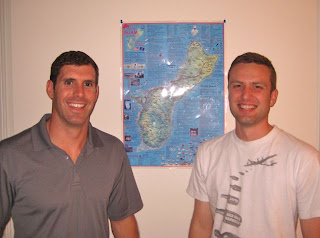 After dinner, we realized we were only a few miles from another USNA roommate/groomsmen, so we drove over to our friend Tom's. Tom was living in Guam until last June. We missed overlapping with him there by about six weeks. Tom is loving life off the submarine, but it was fun to share stories about our island. He had some funny things to say about the transition back to the U.S., like being astounded upon realizing that there was a grocery store open past 9p.m. At one point during this DC visit, I saw something flash in the corner of my eye, and I assumed it was a gecko running up the wall and didn't even turn to look. Turns out it was a piece of dust floating in my periphery, but it took that experience to realize how accustomed to Guam I really have become, since apparently Geckos running up walls in your house no longer requires even a second glance? 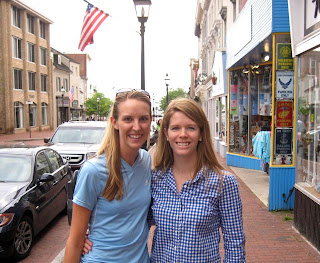 After staying up until 1:30a catching up wtih my cousin some more, we were up a few hours later to head to Annapolis. Our first stop was breakfast with our friends Laura and Chris. Laura was one of my besties from Coronado. We went to church and volunteered at our youth group together. She and Chris left for Annapolis just a week before Nick and I left for Guam. It was so neat to hear how things had worked out for them. Chris loves his job at USNA and Laura is working part time at the paint your own pottery place downtown, which is so incredible since this was one of her favorite hobbies in San Diego. She has amazing artistic talent and is getting paid to do something she used to pay to do. Neat to compare that to my job, which is also something I used to do in my spare time for free. We both feel so lucky that this next step has been so much fun, with lots of free time to spend with our guys. We are so very blessed. And lucky that this happened to be Laura's day off, so getting together was a breeze. So blessed :) 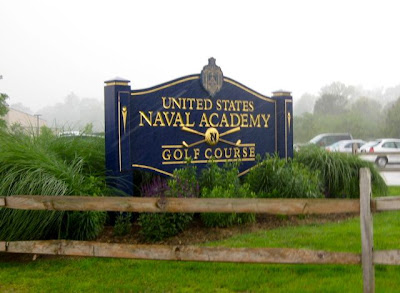 After breakfast we scurried over to the Naval Academy Golf Course ahead of our tee time. Nick had brought his clubs from Guam since he planned to play with his stepdad and uncle in New Jersey, so I told him to bring them down. The course was so beautiful and the terrain so different from what we were used to. No longer in the jungle, it was refreshing to play in a forest. Although, just like in Guam, it still rained on us for a bit. Right after we finished it poured down rain with lightening galore and then hailed! Plus, it was cold! Guam's weather was looking pretty good right about then.

The other main difference was the birds. It was refreshing to see something other than chickens running across the fairways!

Looking back at these pictures, I still think it's so amazing how many favorite amazing people we got to see in such a short time. Of course I wish we had more time to see more friends in the area, but with the Thursday morning timing of our visit, we had to see who we could see and hit the road. It was also nice to have some time to catch up with Nick after my family's visit and before his.

From here we started the journey to yet another familiar place, New Jersey, but this time for unfamiliar circumstances. The good news was Nick's entire family would be there to greet us and to make the visit so special. Turns out dealing with the unexpected is always better when you're surrounded by people you love. I am so lucky to have been surrounded every step of the way.
Posted by Peyton Roberts at 6:29 AM