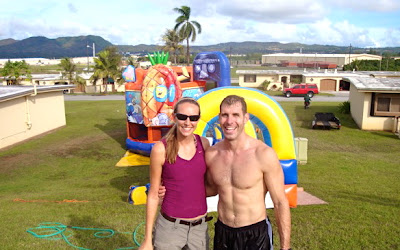 I absolutely love the Bible study our Tuesday morning group is doing right now on the book of Ecclesiastes. The basic gist of our study so far can be summed up in one verse: "I know that there is nothing better for men (or women!) than to be happy and do good while they live." (Eccl 3:12).  In context this verse is saying that suffering happens in this world, painful things happen that we often don't understand, and in spite of hardship and pain and sadness, we can still go out and enjoy life. So despite learning the sad news about Clay, that's exactly what we did this weekend. 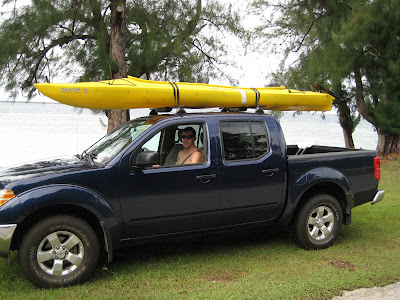 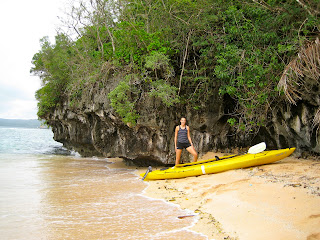 The weekend started on Friday afternoon when Nick took off early. Due to a typhoon spinning around in the Pacific Ocean somewhere, there were scattered rainstorms (downpours) for two days straight, which put a kink in our golf plans. So we snagged a kayak from Nick's command and launched it from the beach on base. Nick installed these handy new roof racks on our truck, making it easy to haul adventure equipment. All it took was drilling 8 holes in the roof. No leaks yet!

We didn't know exactly where we were going with the kayak, but we found this beach area between Gab Gab and Spanish Steps that probably only exists at low tide. I guess we got lucky. It was a beautiful area, although it could use some clean up. This spot is on my short list for a beach clean up I am hoping to organize for the wives of our command. Trash everywhere! 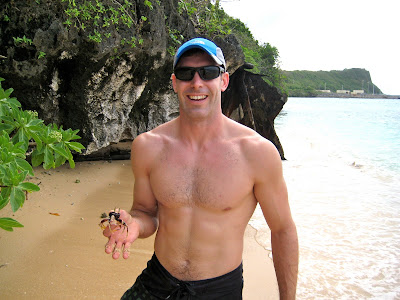 Also everywhere were these funny crabs. After batting it around for a while, Nick finally figured out how to pick one of them up without getting pinched. Okay, so he still got pinched a little :)

Walking down the beach a bit we found this giant rusted out... uhh... boat reckage? Can't really figure out what it is but it looks like there's a propeller or a cleat on the top.

After exploring the beach, we went out snorkeling sans fins, which means we didn't bring the camera. Too bad because we saw what must have been the world's largest puffer fish! It was about three feet long and its head was the size of a basketball! Here's a small puffer fish so you can get an idea of what this thing looks like: 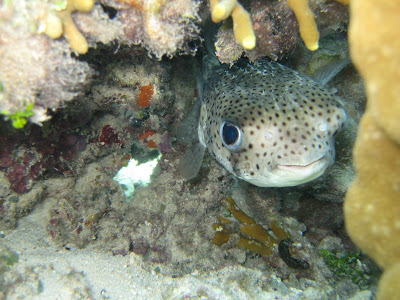 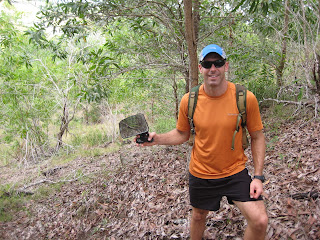 We had a relaxing Saturday morning getting caught up with family... and sleep... and then headed out for our first boonie stomp together! I feel like I have done so much hiking out here and Nick did his XTERRA jungle run the weekend before, but we hadn't really been hiking together out here yet. We headed toward Tarzan Falls, a classic Guam hike. About half a mile into the jungle we found this car sideview mirror laying on the trail. OOG - Only on Guam! 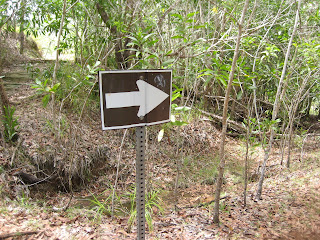 Here is something you SELDOM see on Guam, which is why I had to take a picture of it... a trail marker!! An official one showing you which direction to go! For those of you who have taken a stab at boonie stomping on Guam, you know why I am so excited about this. It is SO easy to get lost on these "trails." Wasn't worried about getting lost on this hike per se, but it was still nice to have some kind of confirmation that we were on the right path. Amazing!  Shortly after following the arrow, we came to this set of three cascades. Below is the first one. 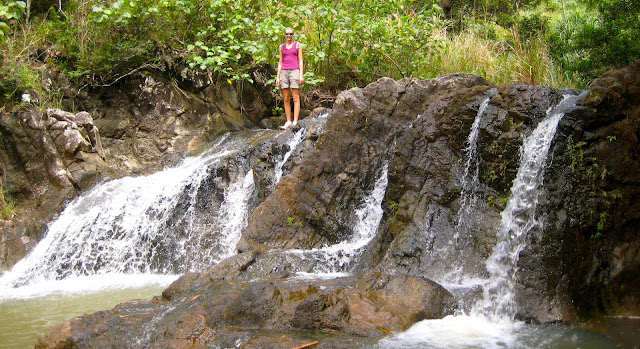 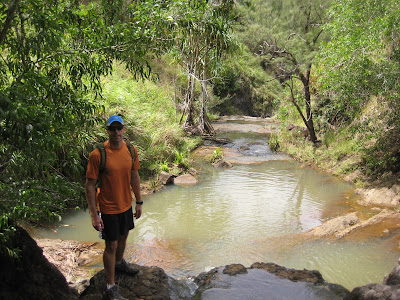 After descending the third waterfall, we hiked through the river for a while. Seeing no creative or inventive way of our own back to the trail, we turned around and climbed up the waterfall the way we came. 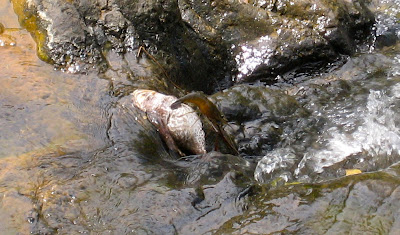 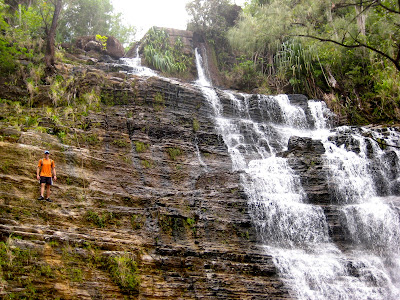 We followed the base trail back around to the first giant waterfall we'd yet to take a look at. Actually, I followed the trail and Nick trudged through the river (taking twice as long, I might add!). And in true Nick form, not being one to follow trails, he decided to go straight up the waterfall instead of taking the trail. I'm sure you are all shocked like I was. He said it actually wasn't as steep as it looked and was a pretty easy climb. I stayed back and went via trail... so I could take pictures of course. 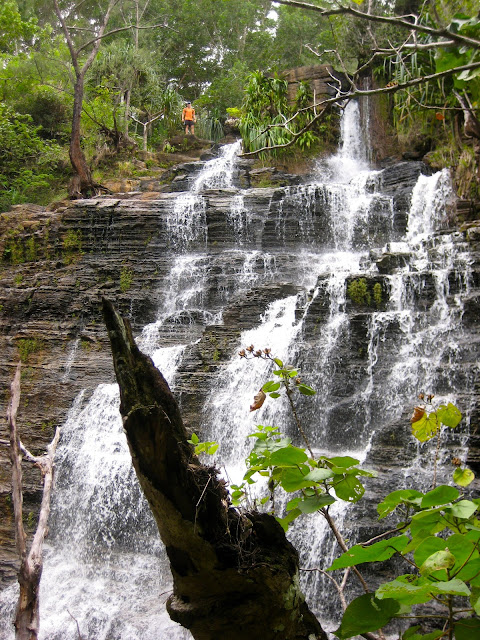 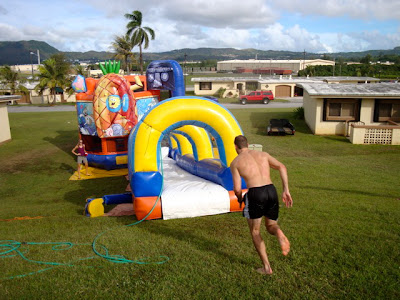 After I hiked the trail back to the top, I met up with Nick and we hiked out of the jungle. At this point we were dripping with sweat, bug spray, sunscreen, and dirt from the muddy hike/river trudging. We headed back to our neighborhood, where I thought we were going home to shower off the grubbyness before heading to a birthday party. But no, only in Guam do you go straight from a disgusting hike to a party with your husband's coworkers. And only in Guam does that birthday party for TWO ADULTS have a giant blow-up slip n slide positioned down a steep hill that crashes into a bouncy house! (You can't make this stuff up). 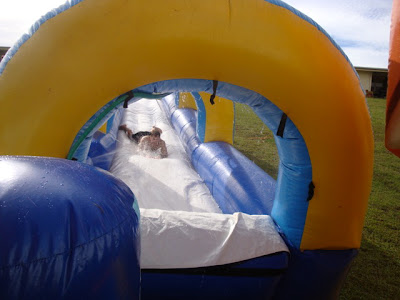 Nick had a great time surfing and sliding like a little kid through the slip n slide. He came out with only minor injuries. I did the girl thing and sat in a lawn chair with a drink in my hand watching and cheering and gabbing with the other girls. It was an awesome party.

The next day we had our perfect Guam Sunday... church and a round of golf. After a weekend of kayaking, snorkeling, hiking, relaxing, partying, and golfing, we were back in love with our island. The best part was knowing Nick was actually supposed to be gone this past weekend, so this weekend was all bonus. I am always grateful for bonus time.
Posted by Peyton Roberts at 5:15 PM

Email ThisBlogThis!Share to TwitterShare to FacebookShare to Pinterest
Labels: friends